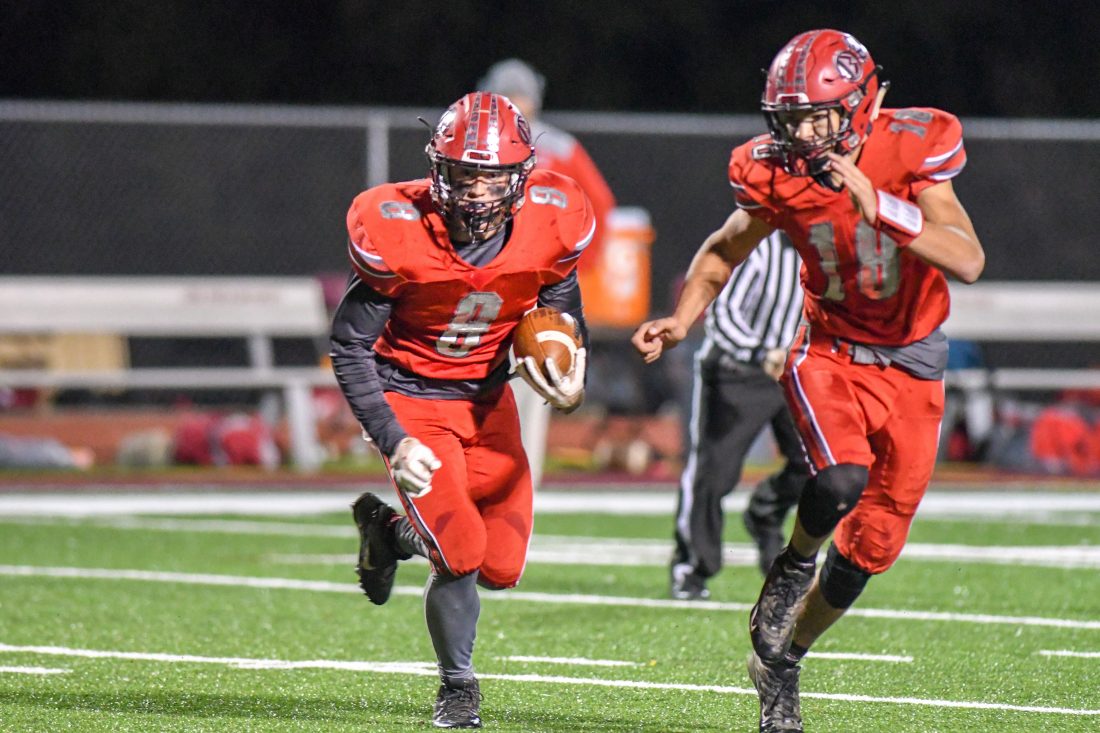 (EXPRESS FILE PHOTO) Bellefonte’s CJ Funk runs with the football while Ethan Rossman sets up a block in a high school football game last season versus Central. The Red Raiders won the game, 21-12.

Some answers stood out more than others, but here’s my five takeaways from Bellefonte’s Media Day session.

1. Bellefonte’s not shying away from the run game

Bellefonte’s identity in the Manning era is its sensational rushing attack. They rushed for 259 yards per game last year, which was nearly twice the national average.

“Since I’ve been at Bellefonte I’ve always wanted to run the ball first,” Bellefonte coach Shanon Manning said. “I feel like that it’s a key to be able to be successful in November. If you can turn around and hand the football off with success, your chances go up dramatically of winning the football game.”

CJ Funk returns after rushing for a team-high 1,476 rushing yards and 19 touchdowns a season ago, as the Raiders hope to dominate in the trenches and punch the football up the middle.

“My opinion of what makes CJ special is not his athleticism, but his work ethic,” Manning said. “CJ works hard, but he’s also a tremendous leader. When your best football player at any position is also your hardest-working kid, it brings a lot out of all the kids who are all around.”

2. Bellefonte has depth at the receiver position

“We have some receivers this year,” Manning said. “We’re deeper at that position than we’ve been in year’s past.”

Trae Bauman returns for his senior season after posting a team-high 423 receiving yards and eight touchdowns a year ago. Nick Catalano also returns, and running back Mason Grey switched positions this offseason from running back to wide out.

“We have three veteran receivers,” Manning said. “We also moved Dylan Dann to receiver, who’s another really good athlete. And we have Austin Craig at receiver too.”

3. Caleb Rockey’s absence will be felt

“You get a Caleb once every 10 or 15 years, you don’t replace him,” Manning said of Rockey.

Manning’s intense endorsement of Rockey was justified. Rockey, one of the nation’s top pass rushers in 2018, finished with a team-high 17 sacks, which was good enough for fourth in the state.

Rockey tallied a ridiculous 36 tackles for loss a season ago, and produced 17 of Bellefonte’s 29 sacks.

“We’re going to have to do somethings to promote some plays, and to put ourselves in great position, and it’s just not going to go through Caleb this year,” Manning said. “So we won’t try to do anything that [the coaching staff] is just comfortable with, we try to make sure we do things that our kids are comfortable with and fit their skill-set.”

4. A junior is set to start at quarterback

Juniors Ethan Rossman and Logan Houser are in a two-person competition for the starting quarterback position, but Rossman’s presence at the Media Day suggested he’s the favorite to start Week 1.

Both players saw action last season. Rossman entered in the second half versus Central and led the Red Raiders to a 21-12 homecoming win. Houser saw reps in Week 1 when he briefly replaced Kyle Myers.

“They’ve both been on the varsity field, and I don’t think they’re going to be star struck by any of it,” Manning said. “Ethan was even our middle linebacker and started all 12 games last year, so I don’t think there’s going to be any surprises between the both of them.”

5. Special teams could be a concern

His clutch gene will be missed– and given the Raiders also lost their punter and long snapper– the special teams unit appears to be one weakness entering the season.

“Getting the kicking game in a good position is something we’ve been putting a lot of time into, in regards to our coverage team,” Manning said. “But as any team knows, it’s going to come down to how well our seniors lead the pack. There’s only nine of them, but if they can lead by example, and stay selfless, we will be just fine.”