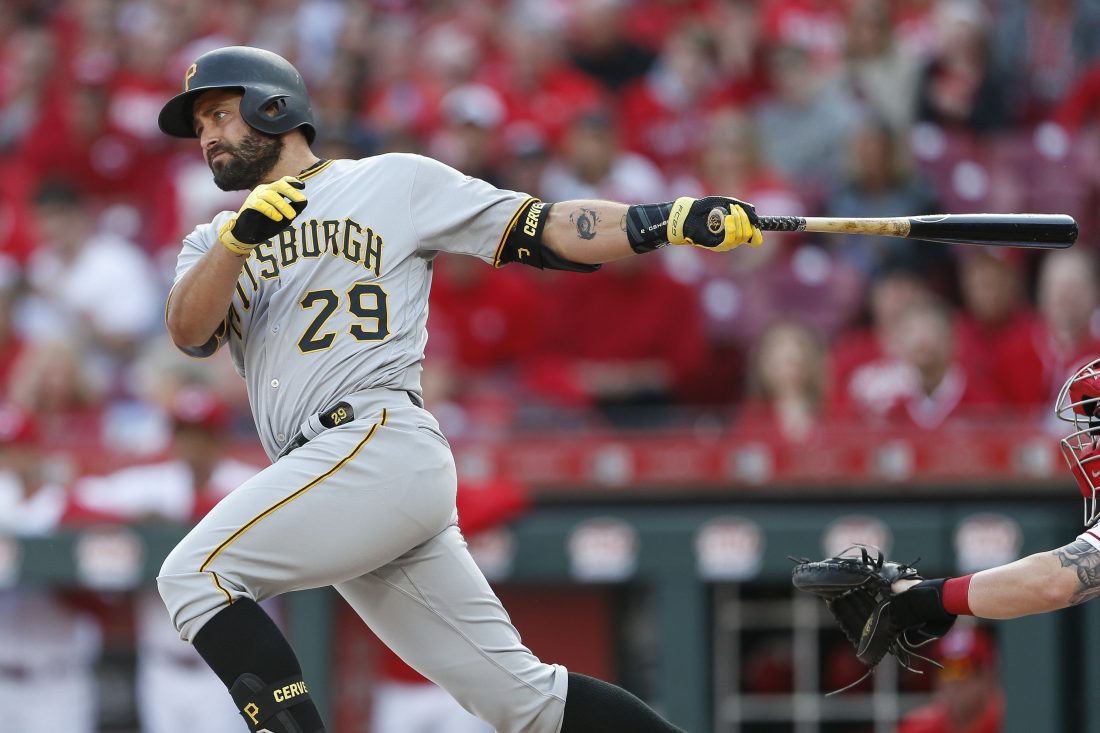 FILE - In this March 28, 2019, file photo, Pittsburgh Pirates' Francisco Cervelli hits a single off Cincinnati Reds relief pitcher Jared Hughes in the sixth inning of a baseball game in Cincinnati. The Pirates are parting ways with veteran catcher Francisco Cervelli, who has been hampered by multiple concussions this season. The club announced Thursday, Aug. 22, 2019, it requested unconditional release waivers for the 33-year-old Cervelli. (AP Photo/Gary Landers)

PITTSBURGH (AP) — The Pittsburgh Pirates are parting ways with veteran catcher Francisco Cervelli, who’s worked his way back from another concussion and is hoping to catch on with a contender.

The Pirates announced Thursday they had requested unconditional release waivers on the 33-year-old Cervelli. He’s played 34 games this season, hitting .193 with one home run and five RBIs.

Cervelli has suffered several concussions in his career, and hasn’t played in the majors since his most recent one on May 25.

Pittsburgh general manager Neal Huntington says the club wants give Cervelli — who recently completed a rehabilitation assignment — an opportunity to sign with another team rather than sit the bench.

The last-place Pirates have split the catching duties between Elias Diaz and Jacob Stallings. Cervelli is in the final season of a three-year, $31 million contract.

Pirates manager Clint Hurdle said there was a plan in place to have Cervelli return this season.

“We started talking about different opportunities,” Hurdle said. “We were always open-minded walking into it, if something better could come along. A quicker opportunity to return and play, as well as a more opportune experience to get involved with, potentially, a playoff team.”

All-Star closer Felipe Vazquez, a teammate of Cervelli’s since 2016, was taken aback by the news.

“I think he knew everything about me, the pitches that I wanted to throw on any count. It’s just crazy. It’s not going to be easy to find another guy that’s willing to be on the same page as you,” he said.

Cervelli was traded from the New York Yankees to Pittsburgh after the 2014 season. He hit .295 in 130 games in 2015 for a team that won 98 games and reached the National League playoffs for the third straight year.

Outfielders Starling Marte and Gregory Polanco and left-handed pitcher Francisco Liriano are the only players remaining from that 2015 team.

“This is where (Cervelli) got his real opportunity to play and was actually able to showcase the talent, and the leadership on the field, to a greater degree than he ever did before,” Hurdle said. “I think our fan base was also attracted to him as well, just the energy. … He played with emotion. He played with fire, and continued to carry that through up until his last game here.”

Pirates general manager Neal Huntington said the move was made to accommodate Cervelli.

“As Francisco has worked through his rehabilitation, we have had multiple conversations with him and his agent regarding his projected playing time for the remainder of this season with the Pirates,” Huntington said in a statement. “Out of respect and appreciation for Francisco, we have chosen to honor his request to be released in order for him to pursue an opportunity that potentially gives him a chance at more playing time, as well as an opportunity this season to compete in the postseason.”

“We appreciate who Francisco is and all he has done for the Pirates and the city of Pittsburgh. We believe this was the right move for the right reasons and wish Francisco well,” he said.