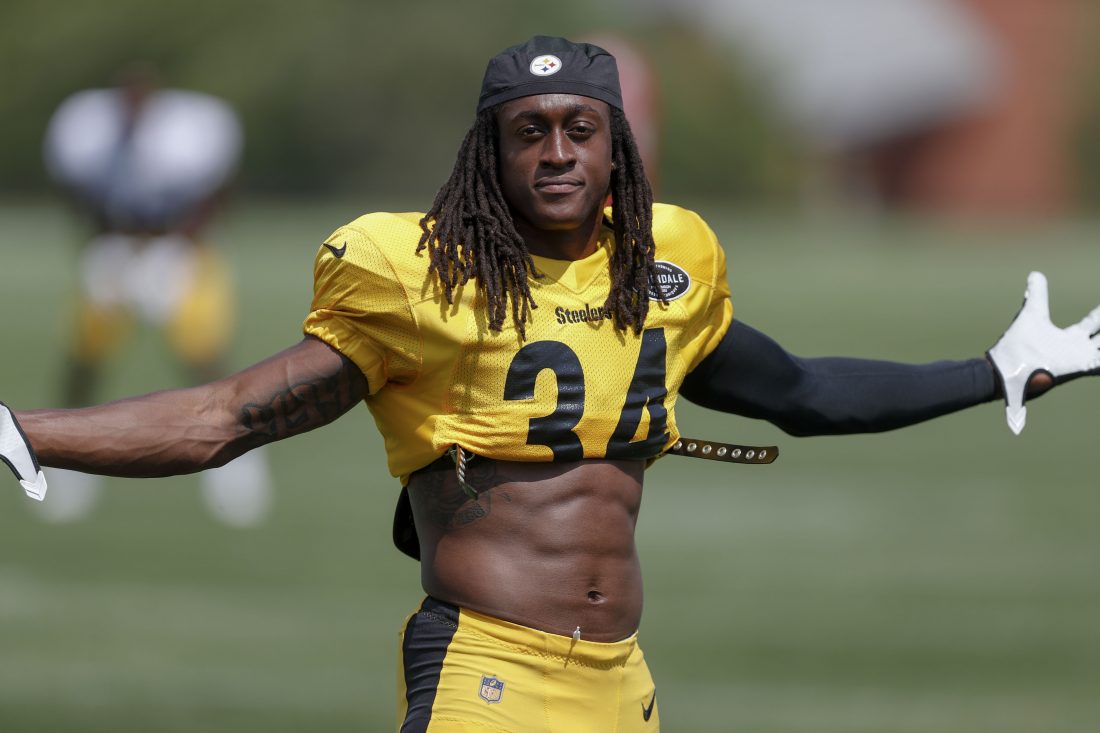 FILE - In this July 28, 2019, file photo, Pittsburgh Steelers strong safety Terrell Edmunds (34) posing for a photo with his jersey rolled up during an NFL football training camp practice in Latrobe, Pa. Edmunds is proud of his 2.1 percent body fat. Though, if he's being honest, he's hoping that number ticks up a bit in his second season, because it means the defense won't be on the field quite as much this fall. (AP Photo/Keith Srakocic, File)

But only by a little.

Technically, Edmunds’ body fat is at 2.1% as he enters his second training camp. Yes, that’s lowest on the team and maybe the entire NFL. And yes, it’s a point of pride in a way for the 6-foot-1, 217-pound 22-year-old, particularly when you factor in that he makes M&Ms a part of his daily diet.

“They tell me I shouldn’t go any lower,” Edmunds said. “So that’s my plan not to go any lower. Stay right there. I want to get to like 3-4 just to feel comfortable and make sure I don’t cramp up because a full body cramp is not what I need. It doesn’t feel good. Just trying to stay right there.”

A couple of extra bags of chips — Edmunds’ other junk food of choice — and a little extra rest on Sundays would help.

Expected to be brought along slowly as a rookie behind veteran Morgan Burnett, Edmunds instead played on 92% of Pittsburgh’s defensive snaps while Burnett dealt with a variety of injuries, the second-highest mark on the team next to safety Sean Davis.

There were bumps along the way and long nights when Edmunds would come home from 11-hour days at the team facility, throw his weary legs into a pair of compression sleeves and spend an hour going over film on his iPad. It was draining and exhilarating at the same time.

Yet the 28th overall pick in the 2018 draft hung in there, finishing second on the team with 78 tackles and impressing head coach Mike Tomlin with his resilience.

Still, Edmunds is just fine if he sees the field a little less this season. The same goes for the 10 guys he shares the huddle with. It means the defense is delivering on its offseason mandate to create more takeaways after finishing with just 15 in 2018, tied for third-fewest in the league.

“We had a lot of balls that came to us that just dropped or we didn’t make the play on it,” said Edmunds, who had one of Pittsburgh’s eight interceptions. “If we made those plays, nobody would talk about we need to make more interceptions or anything like that. We’ve just got to make the plays that come to us.”

To that end the secondary is doing what it can to hold each other accountable. The defensive backs end each practice at Saint Vincent College catching passes off a JUGS machine. When second-year nickelback Cam Sutton dropped an easy pick during drills, he earned himself push-ups as punishment.

“We’re all holding each other to that standard,” Edmunds said.

Edmunds knows about standards. His father Ferrell was a two-time Pro Bowl tight end in the 1980s and 1990s. Older brother Trey is a running back hoping to earn a roster spot with the Steelers. Younger brother Tremaine is a linebacker in his second year with the Buffalo Bills.

The three spent their childhood taking turns pushing the other. The journey ended with each of them in the NFL eager to carve out their own niche. Terrell is the fastest — and he adds, the fittest — of the group. Yet he also knows it takes more than just physical prowess to survive.

“I needed to learn how to play and how to communicate with different people because everybody’s communication is a little bit,” Edmunds said. “We speak in the same language. But the way one person might get it delivered to them is a little bit different. I definitely feel comfortable back there with everyone now.”

The Steelers need Edmunds to be comfortable if they want to bounce back after fading to a 9-6-1 finish and missing the playoffs. The July through December slog wasn’t always fun for Edmunds. Yet he embraced the grind and points to his body as proof. He’s aware his body-fat percentage reads as borderline unhealthy. He stresses it’s not. He attempts to drink as much water as he can to avoid cramps but otherwise, he’s eager to show that he’s more adept at handling the grind that awaits than he was last summer.

“It was just a long year,” Edmunds said. “But it was a long offseason. We don’t want to have that again either so, it’s just something you’ve got to buy into. I’ve bought into it and now we’re here again.”

NOTES: WR Ryan Switzer (quad), OL Derwin Gray (fatigue) and CB Herb Waters (shoulder) left practice Wednesday with injuries. … The Steelers were awarded WR receiver Brandon Reilly off waivers. Reilly was recently released by the Detroit Lions before being claimed by the Steelers. … To make room for Reilly, the Steelers waived cornerback Alexander Myres with a