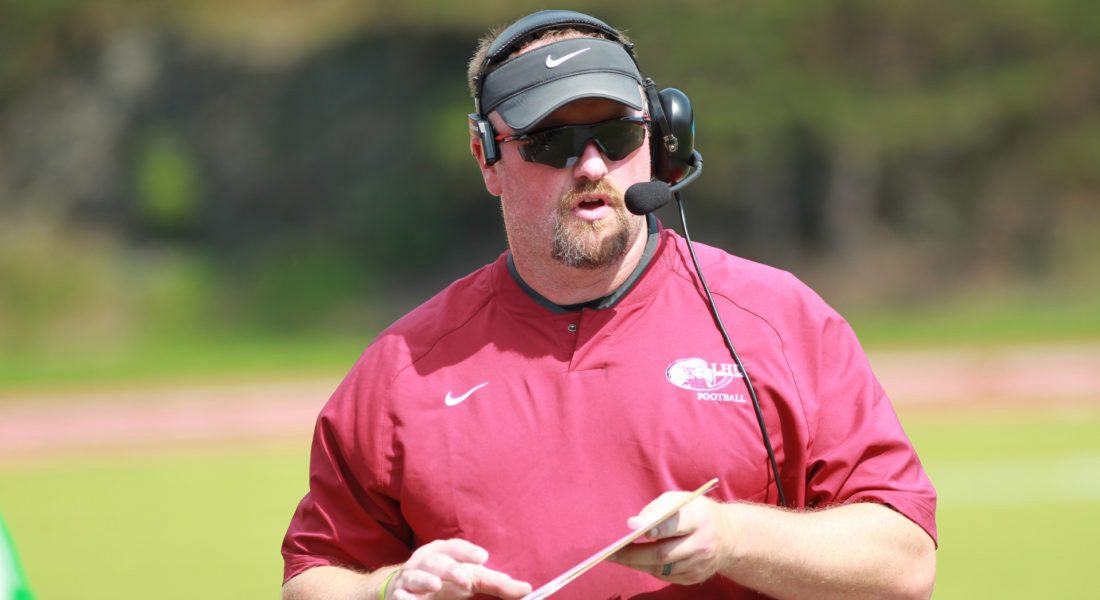 Lock Haven University football opens up training camp this weekend. As the program prepares for its fifth season under the leadership of head coach Dave Taynor, there will be some different names on his coaching staff.

Five assistants from the 2018 staff, including defensive coordinator Jeff Smith, are no longer with the program. Instead, a mix of new LHU coaches have come into the fold to assist Taynor in the upcoming season.

The offensive side of the ball, where Taynor is most involved, has a group of coaches assembled that Taynor is quite familiar with.

“There’s been a little bit of movement but the group that I have with me has been with me for a long time if that makes sense,” Taynor said.

Nickell played for Taynor from 2008-10 at Urbana University in Ohio. He then coached with Taynor at Urbana the next three seasons. After heading to Kent State for the 2014 campaign, Nickell reunited with his former head coach in 2015 when the pair made the move to Central PA.

Tobias is a name Lock Haven fans are quite accustomed to hearing, as he was a quarterback in the program for the last five years. The Centre Hall native makes the jump into coaching with both a continuity with Taynor and an appetite for learning.

“Cam’s gonna be a great coach,” Taynor said. “It’s his first year doing it so there will be a lot of learning that goes on for him but he’s making a lot of progress.”

Tobias, who’s dad Martin coached him at Penns Valley High School, has coaching in his dna. He also has a wealth of knowledge about Lock Haven’s tempo-based system after playing in it for so long.

Tobias’ wisdom will be passed along to redshirt sophomores Kyle Knight and Ethan Persa, with whom he spent two years as a teammate.

While the quarterbacks are still Taynor’s position group, Tobias will provide great value there as he gets fully acclimated to coaching.

“It’s good to have a guy that has some experience playing within the system,” Taynor said.

Webb is someone that Taynor also coached. The new LHU wide receivers coach played at Urbana from 2010-13, where he was a four year starter. He spent the last two seasons primarily working with the receivers at his alma mater.

Webb gets a young but deep receiving corps to try and help mold. Reigning All-American tight end Jalen Jackson and returning wide out Bryan Greene are veterans now, but a mix of talented sophomore targets will try and help propel the Bald Eagles to new heights this season. That group includes Justin White, Christian Drayton, Alex Lantz, and Ahmir Edwards. All four saw action down the stretch in 2018, and have the opportunity to see a healthy amount of targets.

Defensively, Lock Haven has tweaked some things. Hall, who provided constant energy last season, comes into the season in firm control of that side of the ball.

“Coach Hall, at the end of the season last year, moved to defensive coordinator for us,” Taynor said. “He got the whole spring in order to get himself acclimated to having that title.”

The defensive alignment will look slightly different, as LHU plans to play with a 4-2 front 6, as opposed to a 3-3 look it often presented in 2018.

“We’re still gonna play multiple fronts out of it, it’s just a change in the personnel,” Taynor said. “We’re going with two interrior stack linebackers and then we tried to target in recruiting the defensive ends to be guys that clearly stand up as well. More of a hybrid defensive end and outside linebacker type. A little bit of restructuring.”

The revamped defensive line will be led by Chris Sprague, who spent 17 years as an assistant at Lock Haven. He first came to LHU in 1996, staying in Central PA until making a move to Delaware State in 2015.

“I felt like we needed a new burst of energy through philosophy and an influx of talent,” Taynor said. “A lot of calculated changes on the defensive side of the ball from a personnel standpoint and from a schematic and strategic one.”

While there has been some restructuring on both sides of the ball for the Bald Eagles, the core of the coaching staff remains in tact. And the new coaches aren’t really that new after all.