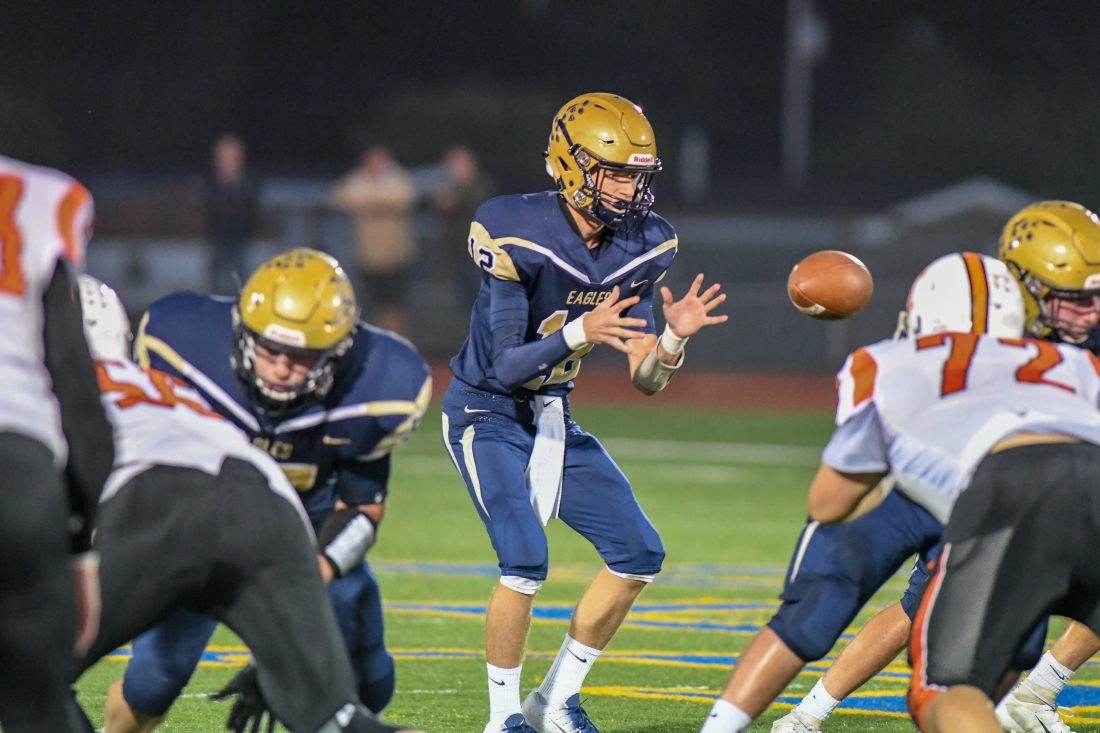 (EXPRESS FILE PHOTO) Bald Eagle Area quarterback Jaden Jones receives the snap in the shotgun formation in a high school football game last year. Jones led the Eagles to a District Championship a season ago, its first in 30 years.

WINGATE- Bald Eagle Area is stacked with talent on both sides of the ball. And once you add in the returning experience, it’s easy to envision the Eagles making another run in the state tournament.

“For the season this year we would like to definitely get back into the playoffs, and make another run like we did last year,” Jones said. “We just need to keep everyone healthy and just make the best run that we can.”

Jones lit up opposing defenses last year en route to 2,966 passing yards and 31 touchdowns. He also added another 359 yards and eight touchdowns on the ground. Head coach Jesse Nagle praised Jones for his versatility on the field.

“He does a lot of the right things, and he’s so athletic,”  Nagle said. “He can throw, he can run and he can put pressure on you in both ways.

“But one thing we want him to do is limit his turnovers and take care of the ball a little bit more.”

Jones thew 19 interceptions a year ago, but plans on minimizing that number in 2019. Turnovers end drives early, and the Eagles plan to elevate from last year’s 32 points per game average.

“We want to have the same fire power we did last year,” Jones explained. “And one of my personal goals is just to keep being a leader and to take us as far as I can into the playoffs.”

Notably absent from this year’s roster is running back Blake Roberts, who was lost to graduation. Roberts ran for a team-high 970 yards and 10 touchdowns a season ago, but Nagle already believes he’s found Roberts’ replacement in Gage Mcclenahan and Tommy Snyder.

“We rotated quite a bit early with those two athletes,” Nagle said. “We feel like we can run at least three guys back there at any given time, be sufficient and score some points.”

When they’re not scoring points- BEA wants to limit the opposing offenses from scoring them. They implemented a new scheme over the summer in hopes of slashing away the defense’s 18 points per game scoring average from 2018.

“We put in a different type of defense, so it gives us multiple sets,” Nagle said. “We want to continue to confuse offenses, defensively.

“And offensively, we still want to run that high-tempo offense. We want to spread the ball around, so of course we’ve been trying to develop the younger kids to rotate in and compete at those positions.”

Nagle anticipates the new faces will learn from the upperclassmen. BEA’s returning experience is an added bonus–and perhaps the team’s top strength heading into the preseason.

“A lot of these guys are three and four-year starters, so having that ability to play 14 games last year and coming back is very critical for the leadership role,” Nagle said. “They understand what it takes to make a long run.”

BEA opens the season Aug. 23 against Troy. Quarterback Jaden Jones has the game circled on his calendar.