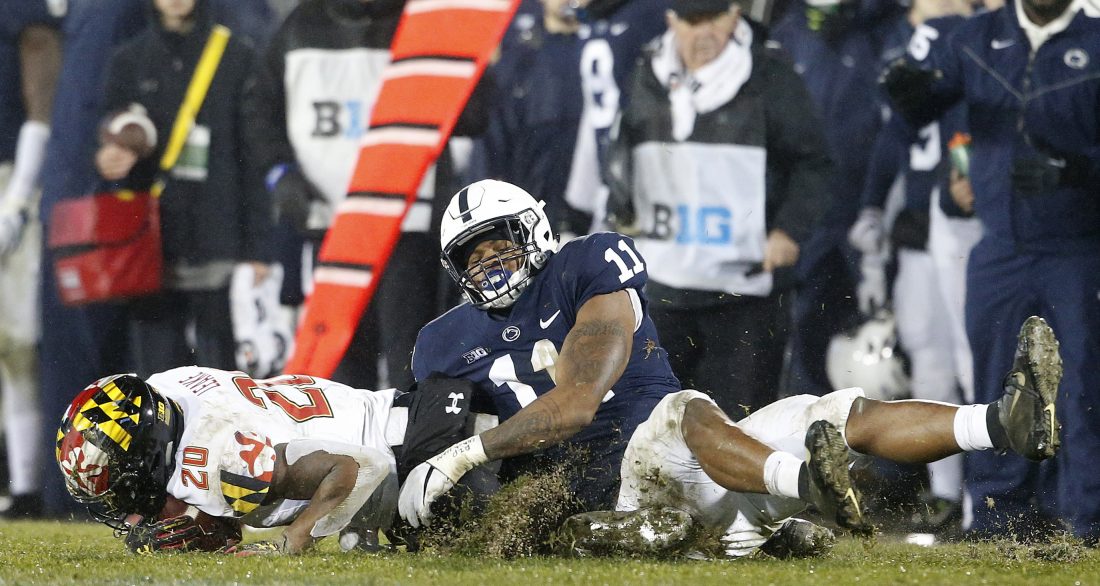 FILE - In this Nov. 24, 2018, file photo, Penn State's Micah Parsons (11) drags down Maryland's Javon Leake (20) for a loss during the second half of an NCAA college football game in State College, Pa. Last year, Micah Parsons put together the greatest freshman season for a linebacker in Penn State history while only starting one game. He learned that making a bunch of tackles wasn't enough to be a starter. (AP Photo/Chris Knight, File)

It was a comical moment during one of the many discussions that day about Micah Parsons, this one centering on him returning kickoffs.

The thing is, what Pry suggested is impossible.

You simply cannot have a discussion about the current football team without bringing up Parsons, a sophomore linebacker who looks like a superstar in the making for the Nittany Lions.

Which is exactly what Parsons, who also likes to talk a lot, always envisioned for himself.

“When I committed here, I had a vision of being up on the jumbotron and being that guy,” Parsons said.

And what does being “that guy” entail?

“I’ve just got to live up to the Penn State standard,” Parsons replied, “and while I’m living up to that standard, I believe Coach Pry and Coach (James) Franklin will put me in the best position to be that guy. They help me every day, I talk to them every day.

Parsons’ standard for himself is incredibly high.

He came to Penn State as one of the top recruits in the country out of Harrisburg High School. In the 247Sports rankings, Parsons is the 63rd best recruit this century (Jadeveon Clowney is No. 1, by the way).

Parsons came into college with big expectations for himself, but as he admitted, a high school kid coming in never fully knows how to achieve such a goal from day one.

Everyone had big expectations for Parsons last year, and it’s probably safe to say he topped most people’s projections.

He didn’t start a single game, yet playing weak-side linebacker, he led Penn State in tackles as a true freshman with 83 (48 solo).

“I think about how much production he had last year, and he never played linebacker before in his life,” Franklin said.

Surely Parsons amazed even himself with his impact as a freshman?

“No,” he said. “Because me, I have so much higher expectations for myself, and I think Coach (Pry) has them for me. Me, I feel like that is the expectation. I wanted to do those things.

“It was a lot of fun,” he added about last season. “When you’re coming out of high school, you never know what to expect. A lot of people get redshirted. Honestly, when I got greenshirted I was excited, but there was a certain point in the year where I was like, I want more.”

Parsons no doubt was very good last year as a freshman, but he wasn’t exactly great all the time. He underwent highs and lows, as any freshman would, and there were some games where he wasn’t much of a factor at all.

As good as he was, the scary thing about him is there’s so much room for growth over the next couple of years. (Yes, he does have three years of college eligibility left, but the reality is if Parsons turns out to be as good as expected, he’ll likely turn pro after his junior year.)

Parsons spent a big part of last season simply figuring out what it means to play college football. It wasn’t until deep into the season that things really started to click for him.

“It took at least five, six (weeks),” he said. “That’s why I kept having splashes. People would say, ‘We see it there, he’s making improvements,’ and then there was a point where they were like, ‘He’s putting them together this game in a row, this game in a row.’

“That’s when it was like, it’s here now. I get it. I understand. And I can start trying to make plays.”

This year and beyond, the expectation is Parsons will be all over the field making plays.

“It was really exciting for me to achieve some of my goals (last year),” he said, “and I have a lot more dreams and ambitions I want to complete while I’m here.”