Novelty hasn’t worn off for MLB players at LLWS 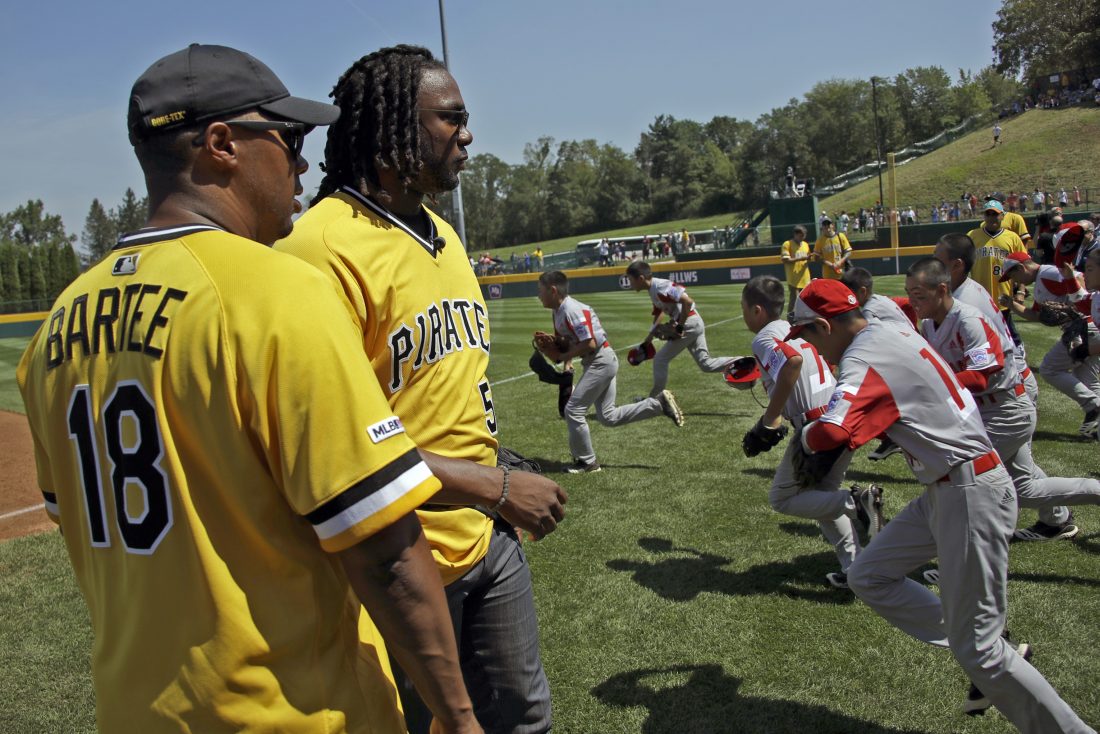 Josh Bell made the mistake of stopping to sign one autograph. Kids swarmed around the Pittsburgh Pirates’ hulking first baseman sticking baseballs, hats and pens in his face to sign.

He was only halfway from the parking lot to the hospitality room at the Little League Complex in South Williamsport and he was swarmed. He signed as many autographs as he could before security eventually had to pull him from the scrum to join his teammates in Lamade Stadium.

That’s the life for the big leaguers in the afternoon before playing the MLB Little League Classic at Bowman Field. Good luck finding a single one who isn’t smiling or recording the events on their phone. In the third year of the annual game, the novelty of the event hasn’t worn off, even for the Pirates, who are the first team to play in the even twice.

“We think about this more as a regular part of our calendar than we do as ‘are we going to do it again next year?'” Major League Baseball Commissioner Rob Manfred said. “It’s really become a tradition and the players love it, and so do we.”

Only four of the Pirates on this year’s roster were here for the inaugural game in 2017 – Felipe Vazquez, Josh Bell, Starling Marte and Adam Frazier – which led to a new group of smiles, and a new interactions for the Little Leaguers with their big leaguer counterparts.

It’s what makes the event so unique. Which is exactly how Pirates starting pitcher Chris Archer described the event. It’s clear three years into one of Major League Baseball’s showcase events, the novelty hasn’t worn off one bit.

It’s part of the reason Major League Baseball has tried to rotate the teams who play at Bowman Field each year during the Little League World Series’ first weekend. The Boston Red Sox and Baltimore Orioles play in the fourth installment of the game next year.

“As long as we have new teams and players, the big league guys are experiencing this for the first time,” Little League President and CEO Steve Keener said. “They get off the bus and they are just in awe of what they’re seeing. What keeps it going each year are the connections these players have with the Little Leaguers, like Yu Darvish with the Japan team. As long as those types of things are happening, I think there’s going to be great enthusiasm for this game.”

Keener and his staff at Little League International aren’t just trying to put on a world-class baseball tournament each summer. They’re trying to give its players a world-class experience. It’s why teams play crossover games with local Little League teams and why they play against each other at the Original League field or Lions Field in South Williamsport.

“This is absolutely a worthwhile investment for us,” Manfred said. “Our most important partner in our youth effort is Little League Baseball. Steve Keener and his group do a phenomenal job. But this is one little piece of our effort to support the people that are the bedrock of our game.”

Two years ago, Pirates manager Clint Hurdle gushed at the end of the day about his interactions with the kid throughout the course of the day and the game that night. He continued to gush prior to the game Sunday, as seems to be the most willing participant whether it’s a disruption to the team’s usual schedule or not.

He’s well-versed in the area and visits quite often because his wife, Karla, is from Trout Run. Hurdle also managed the Williamsport Bills in 1991.

“Usually I’m not a fan of waking up too early to hop on a plane,” Archer said. “But getting off that plane and seeing how excited the kids were was great. The kids from Venezuela didn’t speak any English at all, but they wanted to engage with you. There was no cultural divide. Being welcomed so warmly felt really nice.”