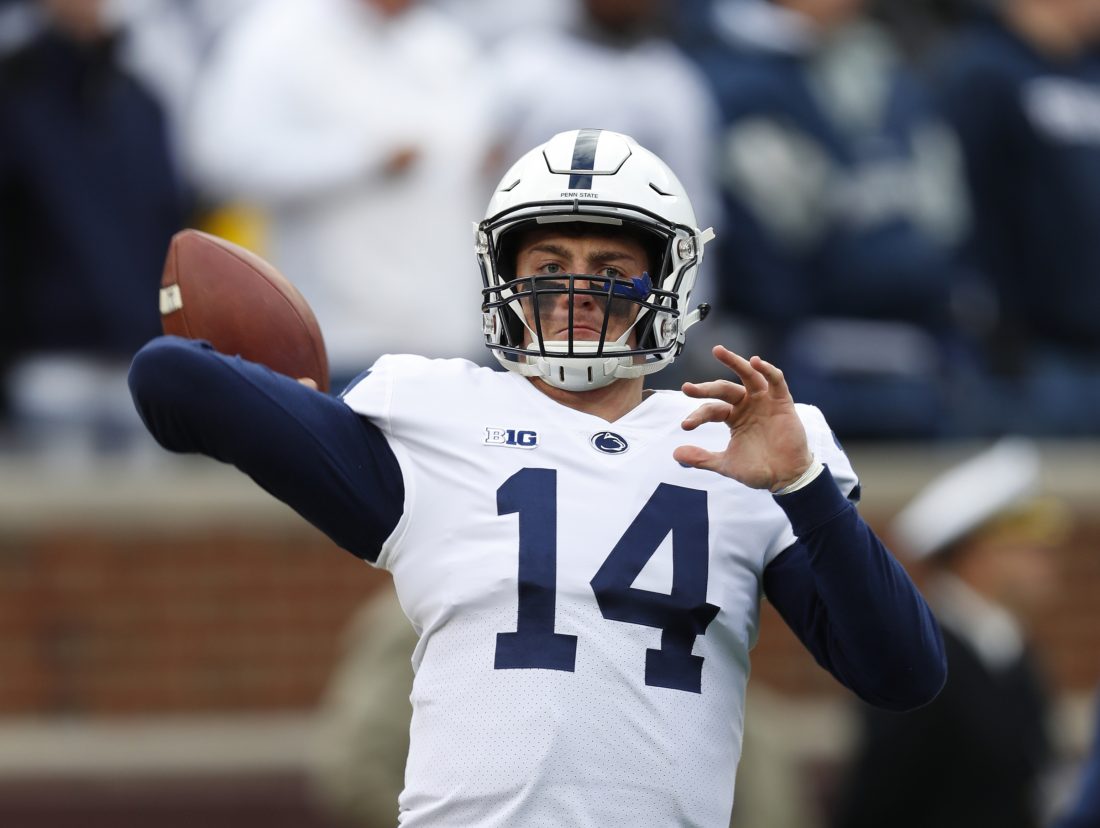 FILE - In this Nov. 3, 2018, file photo, Penn State quarterback Sean Clifford (14) warms up before an NCAA college football game against Michigan in Ann Arbor, Mich. Clifford always planned to be Penn StateÕs starting quarterback. The opportunity came sooner than even he expected. Clifford has huge task in replacing Trace McSorley, but he sounds and looks the part. (AP Photo/Paul Sancya, File)

Clifford has huge task in replacing Trace McSorley, but he sounds and looks the part.

“This is the most confident and most ready I’ve ever been in my life,” Clifford said this summer.

“You’ve got a bunch of guys that are hungry and are excited and that have something to really prove and got a chip on their shoulder,” Penn State coach James Franklin said. “Obviously, you lack experience, and experience counts and experience matters.”

Clifford got a taste last season when backup quarterback Tommy Stevens missed time with injuries. The 6-foot-2, 216-pound Clifford completed 5 of 7 passes for 165 yards and two touchdowns in mop-up duty.

Injuries followed Stevens into the offseason, when he missed nearly all of spring practice. Afterward, he opted to transfer to Mississippi State. That left Clifford, a third-year sophomore, as the most experienced quarterback on the team ahead of freshman Will Levis.

Clifford appears to have the inside track to lead an offense that is also replacing its leading rusher and two starting offensive linemen. He sees potential.

“I think you’re going to see one of the quickest and fastest Penn State football offenses that you’ve seen in a long time,” Clifford said. “Our offense is really hungry to prove that we can be a 400-, 500-, 600-yard offense each and every game consistently.”

Defensive coordinator Brent Pry is encouraged with the depth and playmaking ability the Nittany Lions will have at all three levels. He’d like to see them close out games unlike last season when fourth-quarter collapses at home against Ohio State and Michigan State all but ended championship hopes.

“To have a lead in the fourth quarter and give it up is upsetting, for all of us,” Pry said. “It’s been something that has been talked about in our room since the bowl game.”

He is hoping the combined experience and raw skill of players like defensive ends Yetur Gross-Matos and Shaka Toney, linebackers Micah Parsons and Cam Brown and cornerback John Reid will pay off.

Suspended for two months after spring practice for an unspecified violation of team rules, Gross-Matos wasn’t around his teammates for much of the summer. But when the junior defensive end returned from his two-month ban to start training camp, it was as if he never left.

“I think he’s going to have a really big year for us,” Franklin said. “As the year went on last year, he really started to kind of separate himself I think into one of the more elite defensive ends in college football.”

Now, a self-proclaimed more mature Gross-Matos is ready to pick up where he left off last season. Six of his team-leading eight sacks came in the second half of the season.

Franklin derided his team after last season’s agonizing loss to Ohio State, insisting the Nittany Lions had gone from “average, to good, to great” but had a ways to go to be “elite.”

“Our mantra this year that we are going to talk about all the time is championship habits,” Franklin said. “You know, just big believers in the habits that our guys have on and off the field are really going to allow them to be successful in both areas, as well.”

Excluding a one-sided loss at Michigan last season, Penn State’s last five losses have come by a combined total of 12 points, including back-to-back one-point losses to the Buckeyes.

Franklin has had to replace eight assistants over the last two offseasons, but the biggest change this year is in the Nittany Lions’ front office.

Franklin’s right-hand man and chief of staff Jemal Griffin, who has helped manage nearly every aspect of the program including administration and budgeting, left for an athletic director position at the University of St. Thomas. His in-house replacement, Kevin Threlkel, has been with the program since 2014.

The Nittany Lions host Idaho on Aug. 31 and conclude a four-game series against Pittsburgh on Sept. 14. While officials at both schools have expressed interest in renewing the series, Penn State athletic director Sandy Barbour has said it likely wouldn’t happen until 2030 at the earliest.