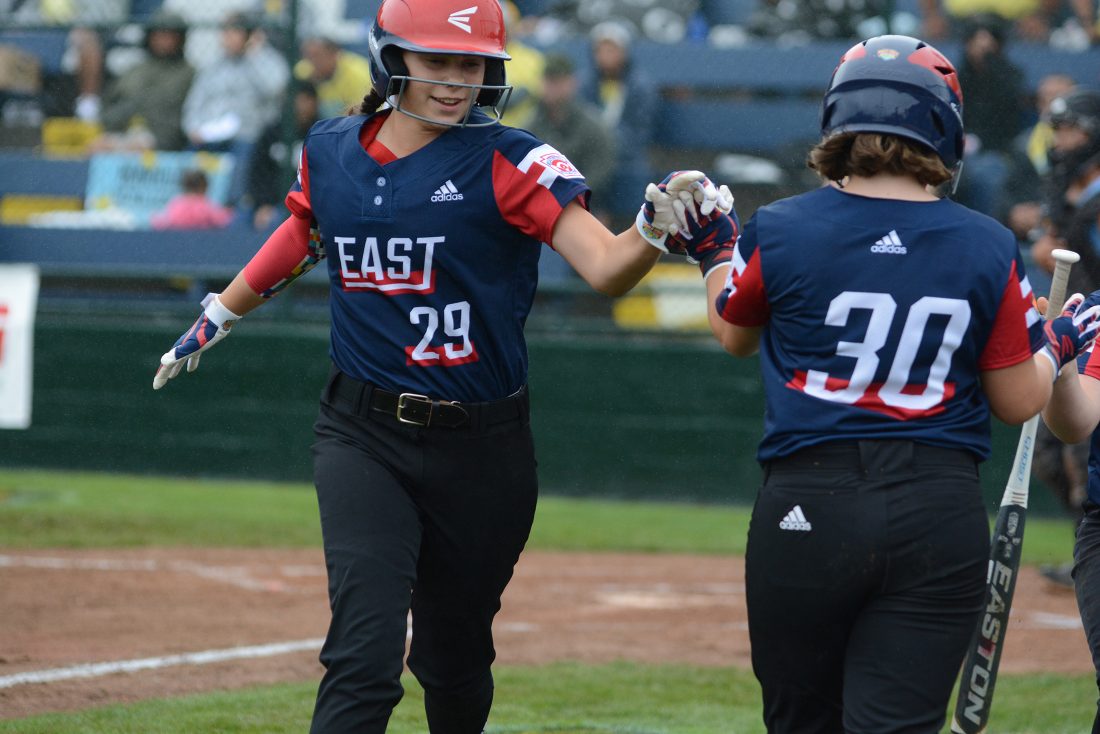 South Williamsport’s Sage Lorson receives a high five on her way back to the dugout after connecting for a sacrifice fly that put the team up 1-0 in the first inning of Thursday’s game against Honolulu.

PORTLAND — The South Williamsport all-stars faced off against the most intimidating opponent they have seen all summer, and they did not blink in a hard-fought 7-5 pool-play loss to Honolulu on Thursday at the Little League Softball World Series.

Williamsport put the pressure on early when Lily Reidy banged a double that sailed over the top of Hawaii’s outfielders. Next up, Sage Lorson whacked a sacrifice fly ball down the right-field line that opened the door for Reidy to race home well ahead of the throw.

Chants of “What Side? … South Side” exploded from the Williamsport bleachers with fans whirling white-and-blue towels over their heads. It marked the first time that the Islanders have trailed this all-star season.

“That loosened the girls up,” South Williamsport manager Cory Goodman said. “They have a girl throwing 60 miles per hour, the fastest we’ve seen, and the girls came in unsure if they could hit her but we were stinging balls the whole game.”

The ace in question is Honolulu’s Jennalyn Sniffen, who allowed only one run during the team’s run to the West Region title. Hawaii tied the score in the second inning with a two-out blooper over third base, and the Islanders surged ahead in the third thanks to Sniffen’s two-run double down the left-field line.

Williamsport’s Liliana Cox got on her horse and tracked a fly ball to the right-field line to collect the third out of the inning. Williamsport stared down trouble again in the fourth inning when Hawaii’s Lehua Acoba was hit by a pitch to load the bases with nobody out. But alertly, Goodman walked toward the home plate and challenged the call. After a brief discussion, the field umpire ruled that the batter had squared to bunt. As a result, the runners were moved back and Acoba was sent back to the batter’s box.

Williamsport starter Alizabeth Schuler would go on to strike her out. But Hawaii would still expand its lead when Sniffen stepped up and smashed a three-run homer that cleared the left-field fence in a hurry for a 7-1 lead. Those proved to be the final runs that Hawaii would score.

Williamsport’s Lacey Kriebel made a catch in center field to end the inning. The East champs made some noise in the bottom of the fifth when Reidy beat out an infield hit that allowed teammate Mikalya Hills to slide home safely. Sage Lorson would connect for an RBI-single that would bring Reidy home to cut the margin to 7-3.

Williamsport wasn’t done. The defense made quick work of Hawaii on the sixth with Kendall Cardone getting under a catch in left field, Schuler snagging a line drive at shortstop, and Abby Lorson catching a pop-up at first base to end the inning with one runner on base.

Williamsport got a sixth-inning rally going when Cox put a grounder in play, and Hawaii’s throw across the infield came in wide. Kriebel paused for a moment between third base and home before dashing for the plate and scoring. Schuler followed with a blast into the left-field gap that brought home Gianna Goodman to cut the margin to 7-5 and put the tying run on base. The Williamsport fans were on their feet and the South Side chant was heard once more.

“They showed that they can fight, and that they belong here,” Goodman said. “Hawaii is a very fundamental, disciplined team, and we hung right in there with them.”

Hawaii secured the victory moments later when Taryn Ho scooped up a grounder on the right side and made the simple toss to first base to end the game. Reidy, Sage Lorson and Hills all finished with multiple hits for South Williamsport.

The team is 1-1 in pool play heading into Friday’s off day in which the team is making a trip to Cannon Beach along the Oregon Coast where a famous scene from ‘The Goonies’ was filmed.

“It will be a chance for the kids to put their toes in the Pacific Ocean,” Goodman said.

South Williamsport returns to Alpenrose Dairy to resume pool play with a 7:30 p.m. game against Latin America on Saturday. ”

Luckily this isn’t elimination play right now, so we’ll get a little practice in tomorrow and when we comeback to face Latin America, it’s a new day,” Goodman said.

Most of the families arrived in Portland on Monday and were on hand to enjoy the Opening Ceremonies.

“Being from where we are, we see how the baseball side is handled, but this has been an unbelievable experience for our girls,” South Williamsport dad Doug Holtzapple said. “The girls are all eating breakfast together and getting to know people from around the world.”

“It’s nerve-racking, but there is a lot of excitement,” another dad, Brian Cardone said. “We’re on a different side of the country in a different time zone. It still hasn’t 100-percent clicked that we are here — that this is real.”