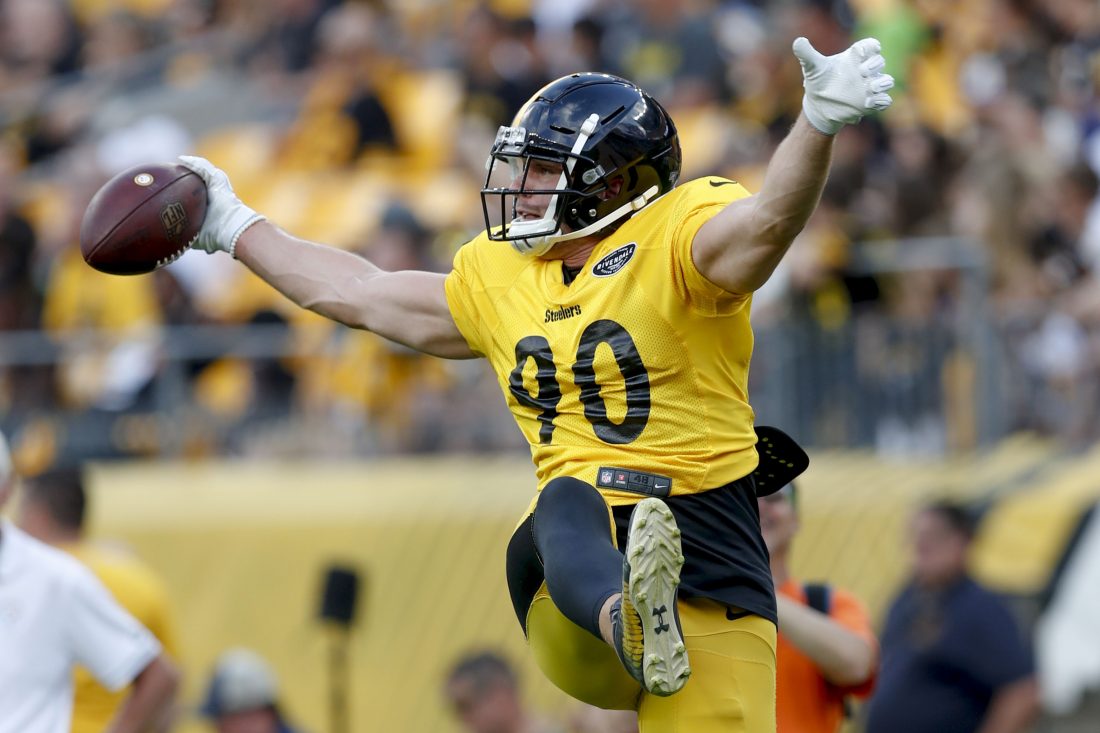 FILE - This Aug. 4, 2019, file photo shows Pittsburgh Steelers outside linebacker T.J. Watt as he makes a one-handed catch during a drill during an NFL football practice in Pittsburgh. Watt is hoping to build off a breakout second season in which he registered 13 sacks. So far, not so good. Watt has been limited with a hamstring injury early in training camp. (AP Photo/Keith Srakocic, File)

The 24-year-old was happy to earn a trip to the Pro Bowl during a breakout second season, but he also wanted to make the playoffs with the Steelers. This year, Watt looks to lead the Steelers back to the postseason, while also becoming one of the league’s top outside linebackers.

“I have very high goals for myself and for this team,” Watt said. “I’m not into individual accolades. I’m happy with how I played, but not satisfied. I definitely have a lot more that I want to accomplish this year.”

Watt is off to a bit of a slow start, as he opened training camp on the physically unable to perform (PUP) list with a hamstring injury. He was removed from the PUP list on Sunday and fully practiced for the first time on Tuesday.

Watt missed most of training camp last season with hamstring issues. But it didn’t affect him in Week 1 after he finished with 10 tackles and three sacks in a season-opening tie at Cleveland.

“If (an injury) is going to happen, (training camp) is the best time for it to happen,” Watt said. “I’m trying to be as cautious as possible, so this is in the rearview mirror heading into the season.”

Watt, the No. 30 overall pick in the 2017 draft, has older brothers in the NFL: Derek, a fullback with the Los Angeles Chargers, and J.J. Watt, a three-time NFL Defensive Player of the Year with the Houston Texans.

But the youngest Watt is making his own name with the Steelers and providing a much-needed boost to the pass rush.

The 6-foot-4, 252-pound Watt racked up seven sacks as a rookie in 2017, and he took a leap forward with 13 sacks last season, good for seventh in the league and tied for second among linebackers. Watt helped the Steelers record 52 sacks in 2018 — tied for the most in the NFL — and a franchise-record 56 in 2017.

Watt said he’s ready to step into a leadership role in his third season.

“I feel like once you get on the field it kind of all happens organically,” Watt said. “I don’t think you have to force anything. You don’t want to act like something you’re not. If guys look to me as a leader, I’ll take that role on.”

Watt has 20 sacks in 31 games, fourth among NFL linebackers since he entered the league in 2017. His 20 sacks are the most by a Steeler in their first two seasons in the NFL with the team. Last year, Watt was the first Steelers linebacker with 10 or more sacks in a season since 2010, and his 13 sacks tie as the seventh-most in single-season team history.

Watt doesn’t get caught up in records though.

“The only stat is that we didn’t make the playoffs,” Watt said. “That’s all that really matters.”

Watt played on the right side during his rookie season, but was moved to the left full time last year where he flourished. Watt feels at home on the left side because he can read and react to the quarterback.

“That’s where I’m most comfortable,” Watt said. “Last year, I was still trying to learn myself and my rushes. Now, I feel like I finally have my repertoire of certain moves, and I feel like I’m reading tackles a lot better than I was last year at this time.”

That’s a good sign for Watt and the Steelers defense.

“I’m not satisfied,” Watt said. “I have so many high expectations for myself and for this team. To try and have a great or elite season is obviously the goal. I’m just trying to get better, and every day at practice is a step in the right direction.”

NOTES: QB Ben Roethlisberger will not play in Friday’s home preseason game against Tampa Bay. QB Josh Dobbs will start. … CB Joe Haden was evaluated for an injury sustained during Wednesday’s practice and it will be addressed after Friday’s game.