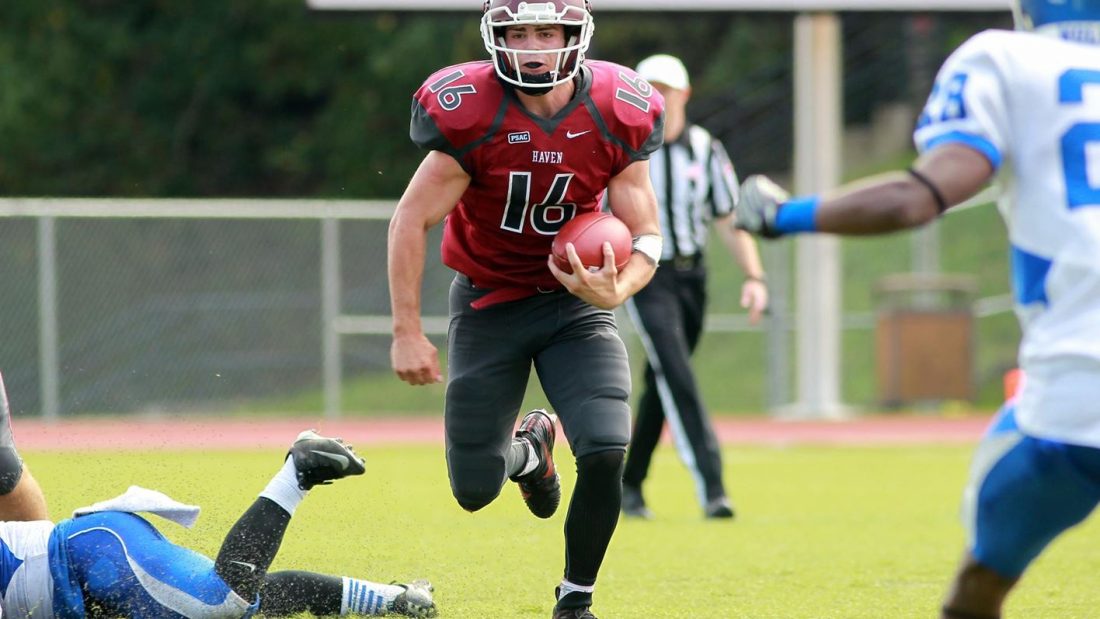 Media days in any sport are all about optimism. Everyone is 0-0 at that point. While Lock Haven University football is picked to finish eighth in the PSAC East preseason coaches’ poll, LHU head coach Dave Taynor has reason to believe his Bald Eagles could soar right past those gloomy predictions from other coaches in the conference.

Despite finishing second to last in the Pennsylvania State Athletic Conference (PSAC) in scoring during a 2-9 2018 campaign, the offensive unit has the pieces to light up the scoreboard this year. With redshirt-sophomore quarterback Kyle Knight fully healthy after a torn acl ended his season after just three and a half quarters of football last year, the Lock Haven passing game could improve by leaps and bounds.

“It’s gonna be fun to watch,” Taynor said. “We’re gonna score points. We got some offensive players that can make a difference out on the field.”

Knight has reigning all-American tight end (and Williamsport native) Jalen Jackson to target, as well as veteran receiver Bryan Greene, and multi-dimensional running back Chantz Swartz at his disposal. Greene; who hails from Milesburg, and Swartz were both All-PSAC East Offensive Second Team selections last season.

All four players enter their third year respectively with the program. This is something Taynor says is key, especially at the quarterback position.

“The third year of a quarterback in a system is usually the year you start to see them master the system,” Taynor said. “I think he’s in that position and he’ll be able to do that so we’re excited about working with him here in the fall.”

Knight provides a unique skillset, in that he is truly a dual-threat signal caller. That’s a term that often gets lazily thrown around, but Knight actually exemplifies it. As a true freshman in 2017, he led the Bald Eagles in rushing. He was a two-time PSAC player of the week honoree that year, racking up 915 rushing yards and eight touchdowns on the ground. He also has an incredibly strong arm, which he’ll get the chance to display in 2019 year along with fellow redshirt-sophomore quarterback Ethan Persa.

Both Knight and Persa have the ability to play multiple offensive positions, which could prove to be tough for opposing defenses to line up against.

“I think Ethan Persa also made a lot of progress,” Taynor said. “We’ll have a couple of quarterbacks that I think have the athletic ability to make a difference with their legs, but also they have all the throws within their arms.”

Lock Haven will attempt to tally points at a high clip through a very different schedule than in years past. Gone are the season-openers at Division I (FCS) opponents. Lock Haven began 2018 with a 45-0 clobbering (in which Knight went down with the injury in the final quarter), and fell 69-3 in Loretto against Saint Francis (PA) in 2017. Instead, the Bald Eagles open up at home with a Thursday night contest against a fellow Division II foe.

Taynor believes both that Sept. 5 clash against Lincoln and the Oct. 3 matchup versus PSAC newcomer Shepherd have the potential to bring in more students to Hubert Jack Stadium.

“I think the Thursday night games will be very good for our student base,” Taynor said. “You get done with class and on that day there’s a big event going on. It’s designed to get a lot more of our students on campus to every one of our home games.”

In addition to the Thursday games, Lock Haven will have a full season of tailgating options for fans. Last year LHU didn’t launch its tailgating until the homecoming game in mid-October.

There are also no more Saturday noon start times. Homecoming against East Stroudsburg (September 28) and the contest versus Kutztown (October 19) are slated for 3 p.m. The final two games of the season are both at home and start a little earlier, but are 1 p.m. kickoffs. West Chester and Gannon are the opponents in those matchups (Nov. 9 and 16 respectively).

“We have some varied start times to allow for their to be a little more pregame festivities and get more of a family-driven atmosphere that is enjoyable for all involved,” Taynor said

The addition of Shepherd makes an already tough conference even more challenging to compete in. The Rams have long been a consistently strong team in Division II football, and join the conference as the only team outside of the keystone state. Shepherdstown, West Virginia is where the program is located.

The Rams earned second place in the preseason poll. Reigning champion West Chester got the No.1 spot. Traditional powers Kutztown, Shippensburg, Bloomsburg and East Stroudsburg fall in line after that. A young but exciting Millersville team takes the seventh spot.

All of these teams are tough, but Lock Haven has reason to believe it can compete at that type of level too.

“In the PSAC East there’s a lot of parity throughout that division,” Taynor said. “On any given day you can sneak up on somebody and get a win or you can fall asleep and take a loss that you probably shouldn’t take. So you have to show up and each week and play good football.”