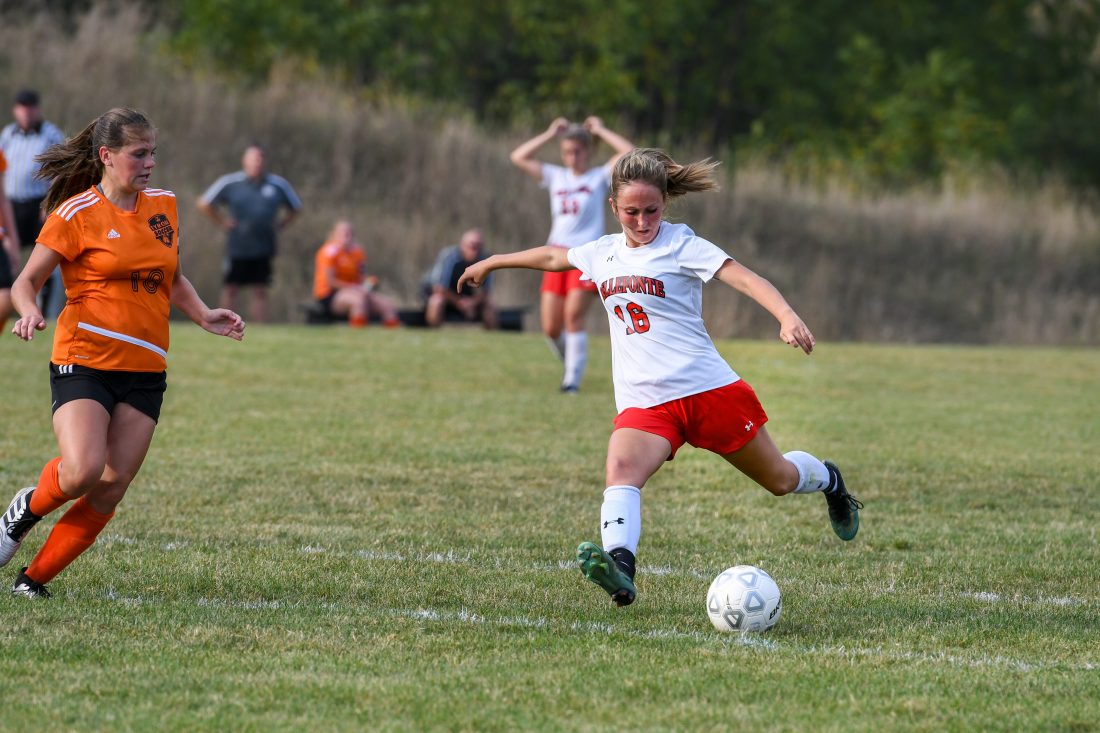 TYRONE — At halftime, things were looking bleak for Mallorie Smith and the Bellefonte Red Raiders.

The Raiders had spotted host Tyrone a 3-0 lead and the game’s official told Smith that she could no longer wear her headband because it tied in the back.

Smith, who was a pair of goals away from 100 in her illustrious Bellefonte career, took off her headband.

And the Raiders came to life.

Smith dug Bellefonte out of the hole with a pair of goals to make it 3-2. Kerri Shutika scored the game-tying goal and Mackenzie Hubbs notched the game-winner in the game’s second overtime as Bellefonte picked up an improbable 4-3 win at the Harry K. Sickler Jr. Athletic Fields on a steamy Wednesday afternoon.

“This feels amazing,” said Smith. “I never thought to myself ‘I’m getting 100.’ Whenever you score, you get more confident in yourself. Just to get to this point, I’m astonished just to get here.”

Smith, who now sits at the century mark, is the lone Lady Raider with 100 goals. She is the school’s all-time leading scorer and has a lot of season left.

As for the headband?

“I guess it worked. He helped me out,” Smith said with a laugh. “I just need to wear one without a tie now.”

Tyrone (2-4) scored on three of its first eight shots and were in complete control of the game.

The milestone goal came nearly 10 minutes later, a beautiful shot that confused Tyrone keeper Rayann Walls. Just like that, it was 3-2 and Bellefonte was in business.

“We had more shots than them in the first half and I knew at some point the ball had to go in the back of the net. To start that rally was really something special,” Smith said.

Tyrone head coach Mike Sparacino felt that his squad did a nice job on Smith for the first 40 minutes. He wasn’t surprised when Smith broke through for a pair.

“Mal is special. This is my third year and if she’s in the game, she will eat you alive. We lost her a couple of times and that’s what killed us. But that’s what good players do,” Sparacino said.

Smith’s goals ignited the Raiders and they finally got the equalizer at the 61:53 mark on a beautiful goal by sophomore Kerri Shutika. She took a pass from Smith and lifted it over Walls’ outstretched hands.

It was Shutika’s first tally of the season.

Regulation ended at 3-3 and both teams had plenty of chances in the first overtime. In the second overtime, Hubbs got behind the defense and buried the game-winning shot past Walls and the celebration was on.

Bellefonte head coach Stacey Miller was thrilled with her squad’s play. In the postgame huddle, she talked about Smith’s milestone.

“I told the girls that it’s a big accomplishment, not only for Mal but for the team as well,” Miller said. “Getting to 100 is a huge feat. We hope she keeps adding to it, obviously.”

The Raiders have won two straight. According to Miller, things are looking up.

“I feel like we are coming together as a team. We’ve been waiting for the girls to finish and they did that tonight,” Miller said. “I feel like this win can give us some momentum.”