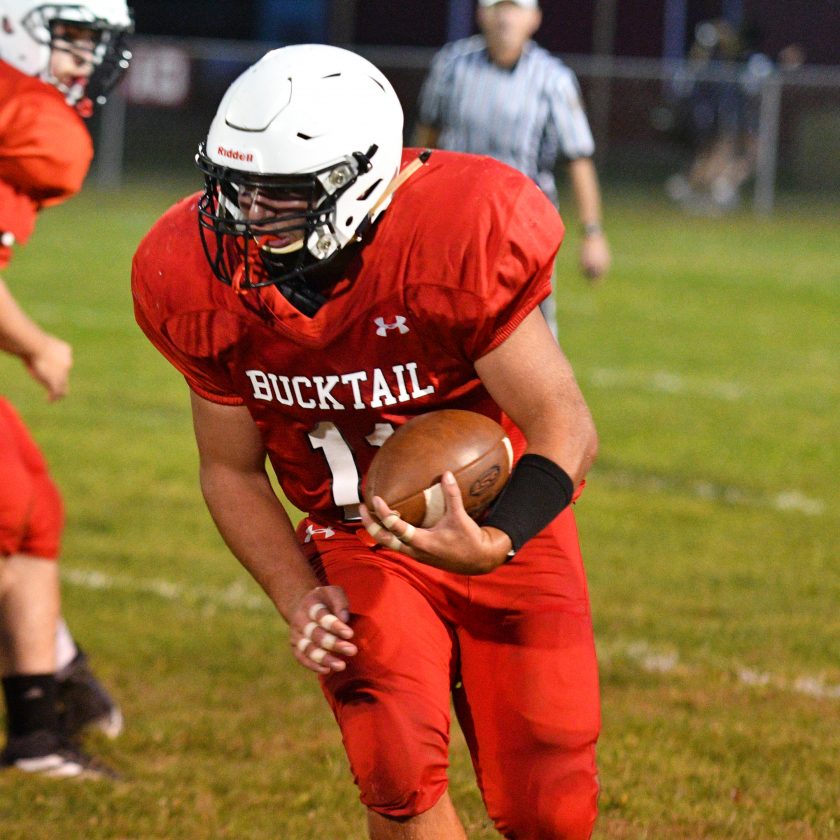 KEVIN RAUCH/FOR THE EXPRESS Bucktail's Gage Sutliff and the Bucks found little room to run as they fell to 0-4 on the season with last night's home loss to Muncy.

The Muncy Indians traveled to Farwell last night and handed the Bucks their first shutout of the season as the visitors picked up a 28-0 win. The loss dropped Bucktail to 0-4.

With a new coaching staff, and just one senior, growing pains could be seen throughout the game, something coach Jared Hurlbert acknowledged is a work in progress. Even as the Bucks trailed just 7-0 throughout most of the first half, Hurlbert said following the loss that there are just too many mistakes being made but he understands why most are happening.

“The kids that have played before never played a zone defense, they always played man and the other kids have only played football for a year or two,” Hurlbert said after the shutout.

“We went back to basics with our blocking schemes but we missed too many blocks tonight, our running back was getting hit before even taking the hand off,” Hurlbert added. “Up front if we can’t run the football it’s going to be a rough night, our offense has to get our 200 pound back (Gage Sutliff) moving.

“Defensively we really took a long time to set up, a lot of times we were out of position, we had a shot going into this and didn’t get the job done,” summed up the coach.

Muncy’s first touchdown came just minutes into the game when quarterback Christian Good found Nathan Palmatier for a 12-yard touchdown pass and catch on an Indian 4th and two.

The Bucks defense would hold Muncy to the lone score until the final minute of the first half but the offense and special teams just couldn’t progress of any sustained type.

After scoring the late second quarter touchdown to go up 14-0, Muncy put a stranglehold on the Bucks with a good keeper that scored from 11 yards out on Muncy’s first drive of the second half.

A good 47-yard touchdown strike to Ross Eyer in the fourth quarter set the 28-0 score.

The Bucks will again be at home next Friday when host Otto-Eldred.