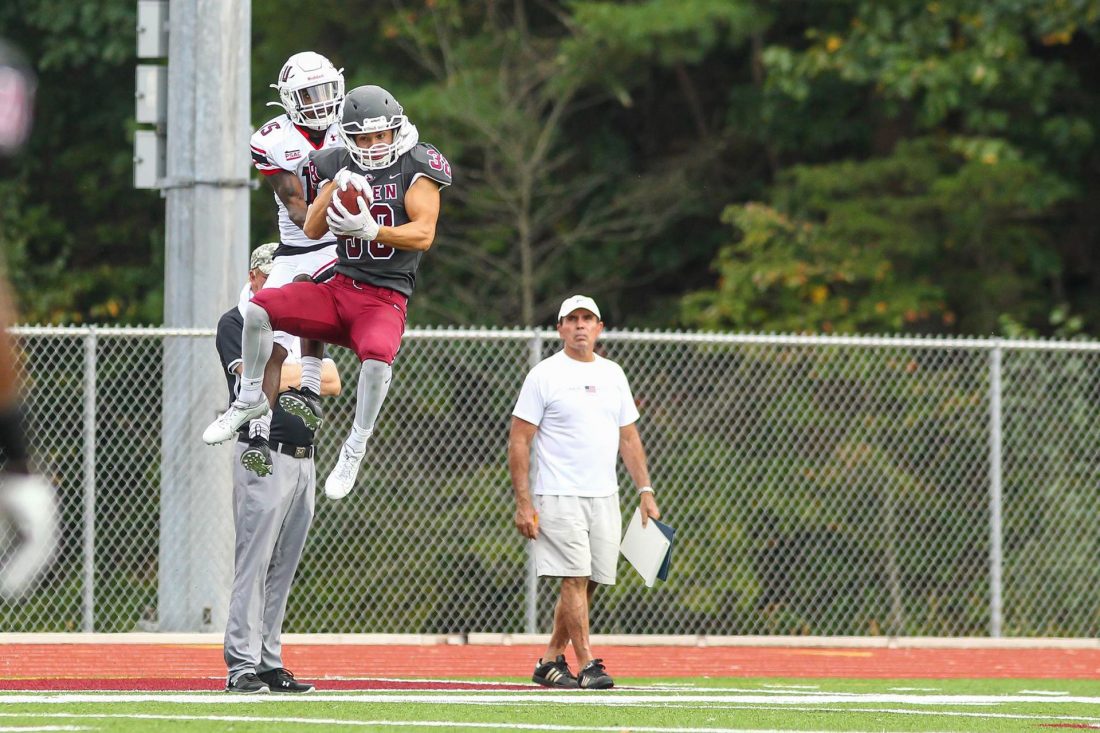 Lock Haven University football fell to 1-3 on the season with a 63-14 defeat against East Stroudsburg Saturday in its Pennsylvania State Athletic Conference (PSAC) East opener. The Bald Eagles have now lost three straight contests, giving up a combined 188 points in those matchups.

“We’ve got to grow a lot with experience of playing the game of football,” Lock Haven coach Dave Taynor said.

Lock Haven hoped for big things against an ESU team it beat 44-41 last season, and had split the first four games against the Warriors in the Taynor era. This one was barely a game though, with the visitors going ahead early and never looking back.

LHU got the ball first after electing to receive and advanced the ball across midfield. Soon after that LHU redshirt-sophomore quarterback Kyle Knight threw an interception under heavy pressure. That pick was returned by ESU linebacker Justin Johnson all the way to Lock Haven’s 22-yard line. Three plays later the Warriors got their first of nine touchdowns on the day, with signal-caller Jake Cirillo connecting with David Akinwande for a 15-yard score.

A few ineffective LHU drives later coupled with two more touchdowns from Cirillo, both to wideout Javier Buffalo, put ESU up 21-0 late in the first quarter.

“We obviously didn’t stop the pass, at all in the game,” Taynor said.

Lock Haven moved the ball well on the ensuing drive, but with such an early deficit the team decided to go for it on fourth down and four at the start of the second quarter instead of attempting a 37-yard field goal. The conversion was not successful and was followed by a four-minute scoring drive from ESU.

Lock Haven would respond with a 75-yard touchdown drive capped by a 26-yard connection from Ethan Persa to All-American tight end Jalen Jackson. The Williamsport native broke several tackles as he trucked his way through the defense to get Lock Haven on the board.

Following those points, LHU forced a turnover, injecting some momentary life into the crowd. Freshman cornerback Levi Engle managed to intercept Cirillo, giving the Bald Eagles a chance to make it a two-score game. Lock Haven would not take advantage, giving ESU the ball back with just under a minute to go in the first half.

The Warriors went 80 yards upfield in just 39 seconds, capitalizing on another Cirillo to Buffalo hookup, this time for 33 yards. That made the score 35-7. LHU managed to get another incredible play out of Jackson immediately after, as he took a short pass from Knight for 58 yards, to give Lock Haven a chance at a 34-yard field goal from Charles Hayes. Then the play that best encapsulated this game happened.

Hayes had his attempt blocked, then off the deflection it was picked up by ESU’s Jahmere Crumpton and taken 83 yards up the left sideline for a touchdown as the half expired. It was 42-7 halfway through a game that was all but decided at that point.

“You have a football team that had a lot of success in Week 1 and played really well,” Taynor said. “They kind of got shocked in Week 2. Then we got our butts kicked in Week 3. And I think we came out in this game very apprehensive. And then played uptight for a little while. And by the time we got done playing uptight we were down.”

While the game was already in hand for ESU, signified by backup quarterback Ben Moser getting to play most of the second half, LHU’s top two QB’s went down with injuries. Knight and Persa both left the game and would not return at various points in the second half, which is extremely concerning.

Since LHU has only a five-day turnaround until a Thursday night home game versus Shepherd, this amplifies the anxiety for LHU fans about whether the team will have even one of those guys available for the game. Taynor did not have know about of the injury status of Knight and Persa after the game.

Jackson finished the afternoon with a team high 90 receiving yards off four catches for Lock Haven. Bryan Greene and Camron Abalos followed in that category, with 78 and 46 yards respectively. Sophomore running back Dante Graham provided the most rushing yards, carrying for a career high 55 yards and a second half rushing touchdown. Junior Chantz Swartz compiled 53 yards on the ground.

Lock Haven gave up 497 yards of offense. While the Bald Eagles racked up 399 yards themselves, they only punched it in twice.

“We didn’t play that well offensively,” Taynor said. The first half we moved the ball all over the field. Didn’t finish drives. It was a rough all around performance.”

Lock Haven now needs to rev things up, with an expedited process for Thursday night’s game. The team practiced Sunday, and now needs to bounce back in a big way to avoid an 0-2 start to PSAC East play.