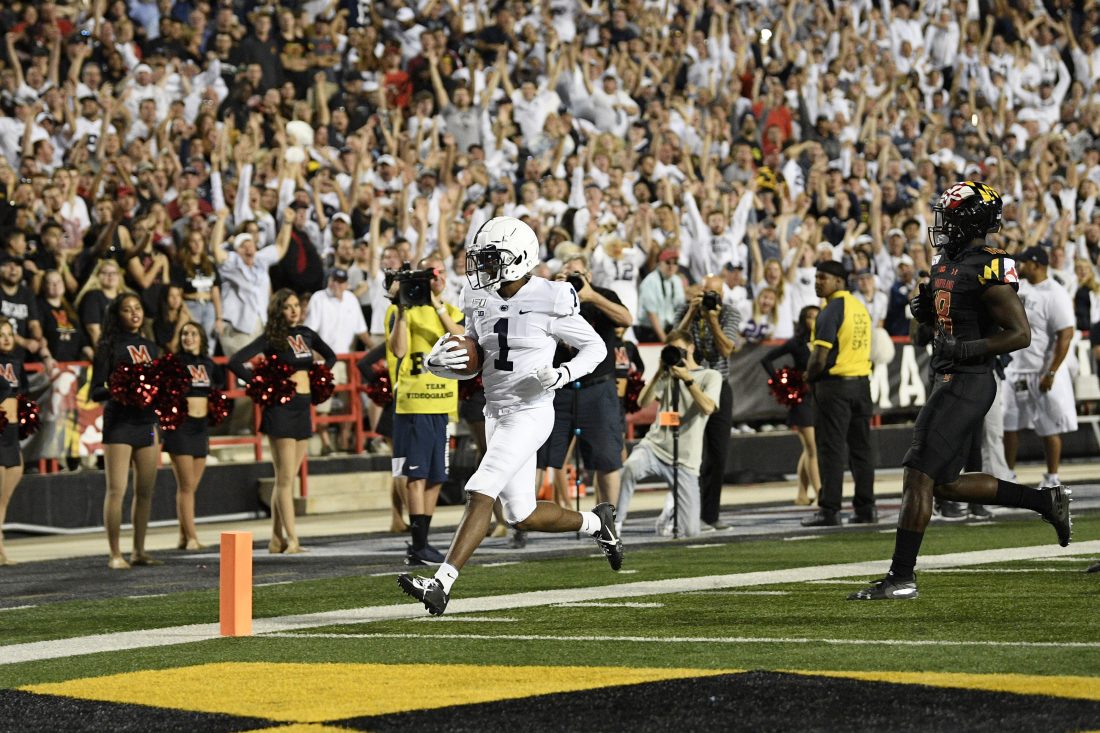 COLLEGE PARK, Md. – Penn State arrived here unblemished at 3-0, but aside from their season-opening scrimmage against Idaho, the Nittany Lions had yet to put together a complete game.

The Lions forced a turnover on the game’s fifth play and then scored on their first offensive play en route to a 59-0 embarrassment of the Terrapins at Maryland Stadium.

Penn State ripped off big and uncontested gains on the ground and through the air, and their cat-quick defense – maybe the fastest unit they’ve ever had – matched Maryland’s speed and suffocated the Terps.

The open date seemed to energize the Nittany Lions, who showcased their extraordinary depth early on both sides of the ball.

“I thought we played excellent on defense,” James Franklin said. “The first, second and third team all played fantastic.”

Consider that they lost their best defensive player, linebacker Micah Parsons, to a targeting penalty in the first quarter and didn’t miss a beat as Brent Pry and the defensive staff shuffled waves of talent – most of it underclassmen – at the starry-eyed Terps.

Sean Clifford was extremely accurate, kept his eyes upfield, scrambled well and generally continued his impressive succession to Trace McSorley, the now Baltimore Raven who witnessed this game from the sidelines.

The Lions once again used all four of their tailbacks, and in the first half alone, they had 11 different players catch passes.

While Penn State obviously looked the best it has this season, it also benefitted from a most gracious host as Maryland could not have played worse.

The Terps didn’t protect, defend or keep their poise as they repeatedly committed penalties and compounded their massive challenge.

Unlike the last couple of years when this game marked the regular-season finale, after Maryland’s season had long been lost, the Big Ten schedule maker seemingly did the Terps a favor by making this year the conference opener.

The game was a sellout with the Terps’ faithful all dressed in black. Make up your own punchline about visitation hours as the game kicked at 8, and the student section was gone by halftime.

I honestly don’t think Maryland is this bad. How do you explain losing to Ohio State 52-51 last year and not being able to score a touchdown against Penn State for three straight years?

But there’s no question Maryland stunk up their home field Friday night, and the mere presence of the Nittany Lions has scared the shells off the Terps.

Does this mean Penn State is a great team? As Lee Corso would say, “Not so fast my friend.”

The rest of the Big Ten, including trips to Iowa, Michigan State and Ohio State along with Michigan’s visit – that’s if the Wolverines recover from their loss at Wisconsin – will determine that.

But in the meantime, unlike previous games against Buffalo and Pitt, Penn State didn’t leave here with a list of items that need fixed and will roll into October with a full head of steam for, ironically enough, the Purdue Boilermakers.