LHU football looks to bounce back at No. 24 IUP 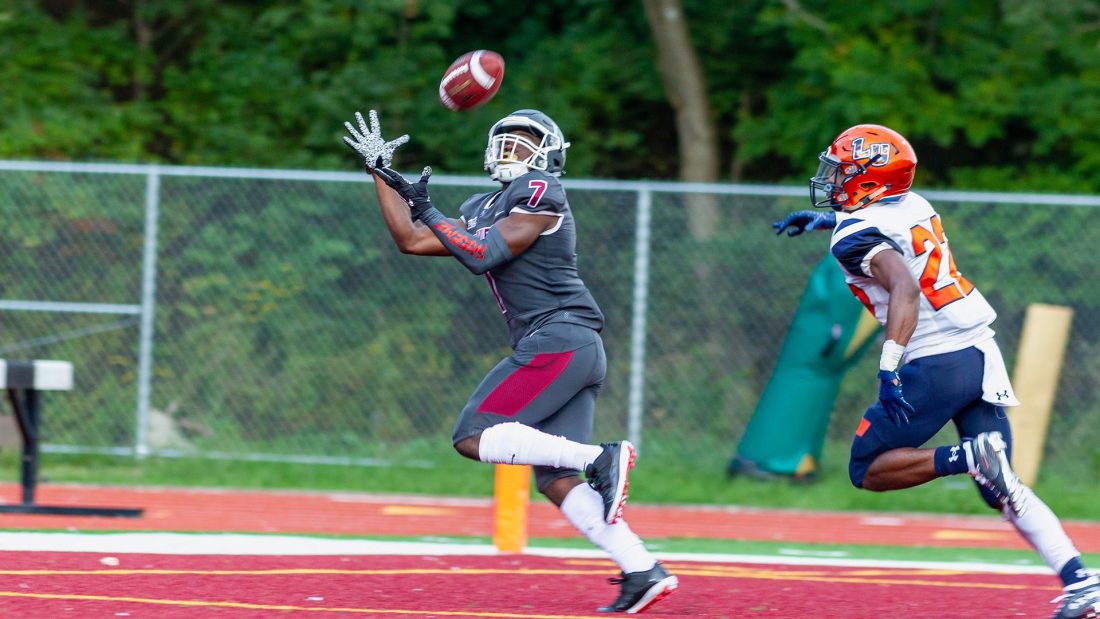 Following last Saturday’s 48-20 loss at Clarion, Lock Haven University football sits at 1-1. The result was quite deflating, especially with how well the Bald Eagles played against Lincoln just one week prior in the home opener. But every week brings a new challenge and Lock Haven gets one of its toughest of the season in that of the Indiana (Pa.) Crimson Hawks.

Indiana (IUP) is a perennial powerhouse in the Pennsylvania State Athletic Conference (PSAC) and Division II football as a whole. It comes in fresh off a 54-0 road demolition of Millersville.

The Crimson Hawks held the Marauders to just 26 yards of offense (not a misprint). Millersville had -22 yards rushing, and was down by four touchdowns by the end of the first quarter. The win propelled IUP to a 2-0 record, and now the No. 24 team in DII football is home to face a Lock Haven team it beat 59-17 last season.

That score from last year’s game is a little deceiving as far as how Lock Haven played in that one. Offensively, the line was able to stand tough against a relentless IUP defensive front. The Bald Eagles executed their offense at a respectable clip in that one, but simply couldn’t get defensive stops.

Lock Haven is a very versatile offense, proving opposing teams with a lot of looks that are not accustomed to seeing on a given Saturday. The mobility of LHU quarterbacks Kyle Knight and Ethan Persa (both redshirt-sophomores play a role in this offense) always can keep a defense on its toes. Aside from Milesburg native Bryan Greene, the Bald Eagles have a very young receiving corps. It’s a talented one, but it’s a group that will need to win one-on-one matchups to have a chance against one of the best secondaries in the conference.

IUP has a former All-American corner in redshirt-senior JR Stevens, as well as an uber-talented junior named Nazir Streater that can make the lives of receivers really miserable. Streater transferred in this season from LIU-Post, where he was an All-Region performer in 2018. He already has two interceptions in his new uniform.

The Crimson Hawks are littered with defensive players that have produced at a high level for multiple seasons. Senior linebacker Damon Lloyd is high up in the IUP record books in career tackles. Senior defensive end Dondrea Tillman is a two-time All-PSAC West player and a reigning All-Region standout. Accolades have been distributed throughout IUP coach Paul Tortorella’s defense in recent years, and likely will be again at the end of 2019.

The glaring question is how will Lock Haven’s defense stack up. There have been understandable growing pains with LHU’s young defense. The Bald Eagles have only four returning starters from 2018 and have switched to a four man front. The official alignment of Lock Haven is a 4-2-5, but really LHU shape shifts throughout a given game. It’ll take time for the Bald Eagles to find their footing on that side of the ball, but giving up touchdowns on the first four drives like they did at Clarion last week simply cannot happen if the team is to have any chance to sticking with IUP.

Offensively, the Crimson Hawks have a graduate transfer quarterback in Quinton Maxwell. The 6-foot-3 signal-caller came in from Division I Ohio University, and played well against Millersville after having some struggles in a Week 1 tilt versus New Haven. Maxwell has a treasure chest of weapons to work with, as Tortorella believes he has the best group of running backs and wide receivers in the PSAC.

Running backs Samir Bullock and Justice Evans are both returning all-conference players, and get to run behind an experienced offensive line. The majority of the IUP receivers are seniors, but it’s sophomore Duane Brown that’s making the most waves early in the season.

Brown was converted from a running back to a receiver during spring ball. It’s worked wonders early. He has five touchdowns through two games, three receiving and two rushing. He can line up all over the field, sometimes taking jet sweeps and even running some wildcat formations. The LHU defense will surely try to key in on him.

IUP has 34 straight victories over Lock Haven dating back to 1992. This will undoubtedly be an incredibly tough task for the Bald Eagles. But how well they compete in a game that does not factor into their conference standings will be a good indicator of how ready the team is to try and make a run once PSAC East competition begins next weekend.