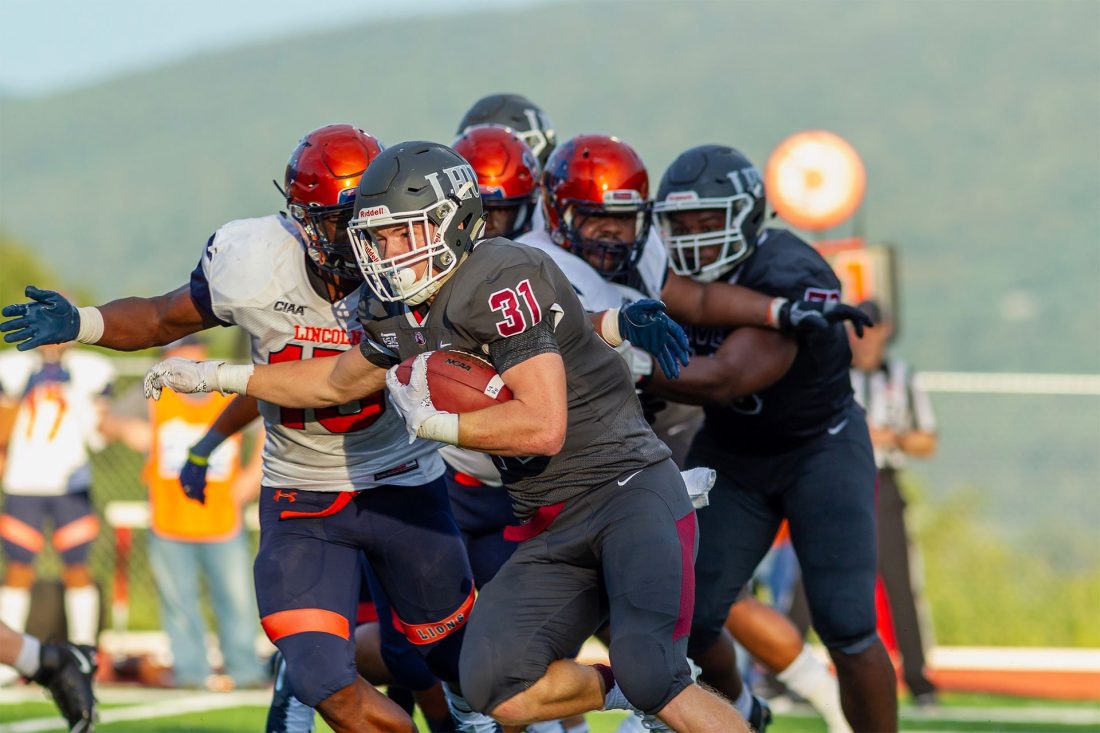 In Lock Haven University football’s loss Saturday at Clarion, the number that stands out is 30. That’s not the amount of points either of the teams scored, it’s the amount of combined penalties.

Each team was responsible for 15 infractions, with the total penalty yardage adding up to 341. That’s a figure neither LHU head coach Dave Taynor nor Clarion’s Chris Weibel is proud of, but Lock Haven is the team that suffered a 48-20 setback to move to 1-1 on the season.

“You’re not gonna be successful with that many penalties in a game,” Taynor said. “There were a ton of penalties. There were 30 penalties in the game total that were accepted. That’s not to mention the 20 or so that offset throughout the game.”

It truly felt that on every other play there was yellow laundry on the field. And that might actually be accurate. But Lock Haven also gave up touchdowns on its first four defensive drives and got down 34-0 before finally getting on the scoreboard late in the first half.

“Defensively, in the first half we had some blown coverages and allowed guys to roam free,” Taynor said. “We didn’t make them earn a couple of touchdowns in that first half.”

Just like LHU, Clarion had a lopsided Week 1 victory. The Golden Eagles took down Shippensburg on the road, winning 48-28. In that performance, Clarion ran the ball down the Red Raiders’ throat. Running back Mylique McGriff totaled 179 yards and three touchdowns in that contest.

Against the Bald Eagles, Clarion had no issue running or throwing the ball, compiling 316 yards through the air and another 214 on the ground.

Clarion set the tone for the game on its first drive. The Golden Eagles got the ball at their own seven yard-line early in the first quarter, but marched 93 yards down the field in just over three minutes to punch it in on a 2-yard handoff to fullback Ross Greece. McGriff got loose for a 49 yard rush on that drive.

Lock Haven followed that up offensively with a three-and-out, then gave up a 12-yard touchdown pass on another three minute Clarion drive. An interception from Bald Eagles quarterback Kyle Knight gave Clarion the ball back quickly, and the Golden Eagles promptly capitalized. Clarion signal-caller Michael Proios connected with wide receiver Quinn Zinobile for a 66-yard score, just three plays after the pick.

“We never could get in rhythm because every time we’d get a play it’d get called back,” Taynor said of his team’s lack of offensive execution.

This is especially troubling, considering just one week prior the Bald Eagles gained 616 yards of offense in a 57-13 home victory over Lincoln. Seven different players crossed the plane in that contest. Saturday lacked much offensive excitement for the Bald Eagles.

Lock Haven was led offensively by veteran wide receiver Bryan Greene and junior running back Chantz Swartz. Greene caught five passes for 95 yards and a touchdown, while also obtaining a rushing touchdown on a four-yard jet sweep play. Swartz tallied 68 rushing yards on 14 carries and a four-yard second half touchdown.

Defensively, safety Kahari Whitfield had his name called the most. The sophomore had eight tackles and an interception. The defense as a whole started to settle in as the game progressed, but it was really too little too late.

“I will say, in the second half I felt better about how we played both offensively and defensively,” Taynor said. “We made them earn what they got.”

The duration of the game is said to be three hours and 28 minutes. That’s a massive amount of time for a football game at any level, speaking to just how rough this one was to take in.

Knight was frequently under duress, but also had a good amount of throws he’d like back. He ended up going 5-24 for 94 yards, while running for 26 yards on eight attempts. He had two turnovers, with that interception as well as a fumble. Fellow redshirt-sophomore quarterback Ethan Persa finished 5-6 with 77 yards and a touchdown.

But as a whole, the tempo-based offense moved slowly and ineffectively. Lock Haven finished with 14 first downs, with the team’s weekly goal set for 25. On third down LHU went 3-14, which won’t get the job done.

“With those third downs, a lot of them ended up being third and longs, which is not where you want to be,” Taynor said. “So we didn’t execute very well. That’s the bottom line.”

Lock Haven now regroups and has to make big strides during the week before its Week 3 matchup at Indiana (PA). The Crimson Hawks are perennially one of the best teams in the Pennsylvania State Athletic Conference and come off a 54-0 victory at Millersville.

To give themselves a chance at IUP, the Bald Eagles need to practice at a very high level this week.

“Every bit of this loss we earned,” Taynor said. “So we’ve got to bounce back and start to get ready for IUP and prepare better. If you prepare better you play better.”