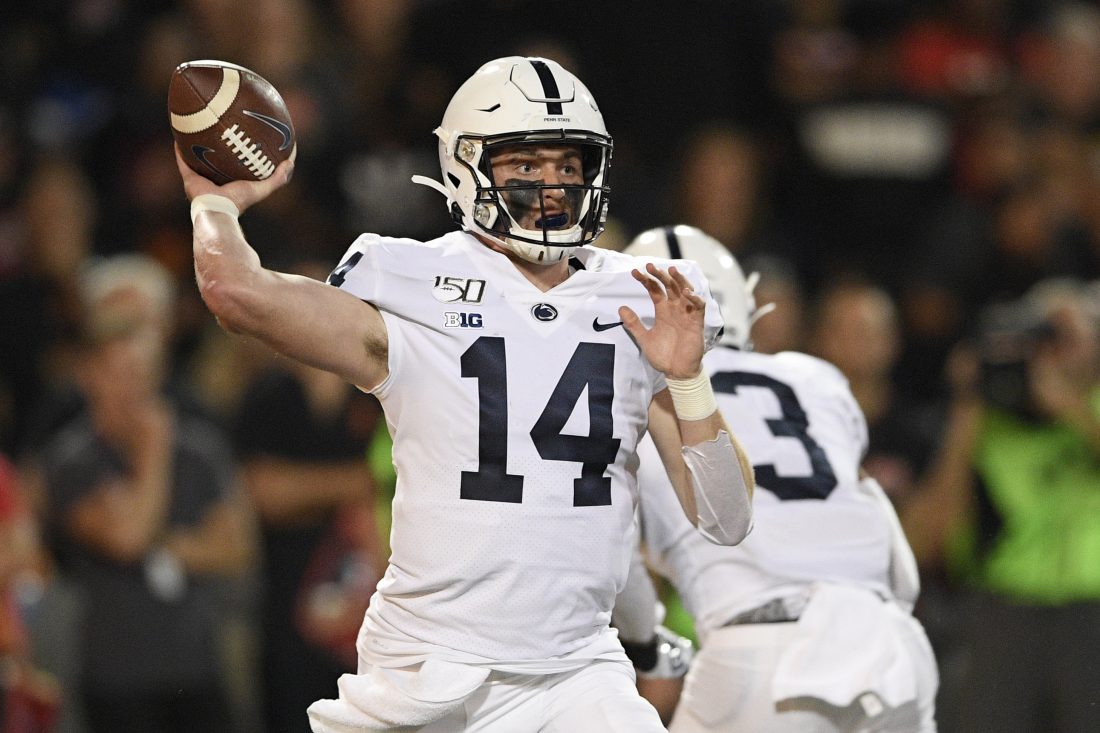 As they stood with their children and players celebrating Friday night’s decimation at Maryland, Penn State coach James Franklin pulled offensive coordinator Ricky Rahne close and kissed him on the head.

It was a fantastic night for many members of the PSU program, with Rahne right at or near the top.

Rahne had an excellent night calling plays, and Sean Clifford and the Nittany Lion offensive players executed those plays to near perfection in running over the Terps, 59-0, while rolling up 619 yards.

Clifford completed 26-of-31 passes for 398 yards, the third-highest total in Penn State history behind Christian Hackenberg (454 vs. UCF in Ireland in 2014) and Zack Mills (399 vs. Iowa in 2002). Clifford threw for three TDs, ran for another and also led the Lions in rushing with 54 yards.

Rahne put his quarterback in good position all night with the playcalling, and Maryland’s terrible pass defense also helped. Clifford made a few really nice throws, but most of his completions were to wide-open receivers who had no defenders close.

Rahne needed to have such a big game, and anyone who’s paid close attention to PSU’s offense over the past year knows why.

Franklin knew it, too, even though he would never say so publicly about his good friend. The little kiss to the head after the game was a fun little show of support by the coach, and a couple of reporters (Mark Wogenrich from The Morning Call in Allentown and Audrey Snyder from The Athletic) caught the neat moment on video.

Penn State’s offense struggled the second half of last year, so Rahne came into this season with pressure on him. Losing Trace McSorley and having to break in a new quarterback added to the pressure.

Scoring 79 points against Idaho doesn’t really matter in the grand scheme of things. The Lions then were held to seven points in the first half against Buffalo before exploding for 38 in the second half.

The Pitt game was interesting. Penn State scored only 17 points, which would indicate a poor showing by Rahne and the offense. But really, Rahne had a solid day in that game as he called for several deep pass plays that were there, but Clifford couldn’t connect on them.

All a coordinator can do is call a good play. If the quarterback misses the throw, that’s on him. It was on Clifford against Pitt, and the first-year starter acknowledged that after the game.

Rahne is a very smart and very confident person. You’ll never hear him waver in his belief in himself or the job he’s doing, even after receiving criticism from the masses, as was the case on the infamous fourth-down call last year against Ohio State.

That confidence will come in handy once the opposing defenses start to get tougher.

The Lions shut out Maryland for the first time since 1970, an extremely impressive accomplishment given that the Terps have some good weapons in their running game and an experienced quarterback.

Maryland had only 128 yards of offense, and PSU played most of the game without star linebacker Micah Parsons, who was ejected for targeting.

Pry gets a lot of credit from the media who cover Penn State and know full well how good he is, but his name doesn’t come up anywhere near as much as it should when discussing the best defensive minds in college football.

As always, Franklin and PSU are fortunate to have been able to keep Pry around this long because he has had head coaching opportunities come up but has decided to remain in Happy Valley.