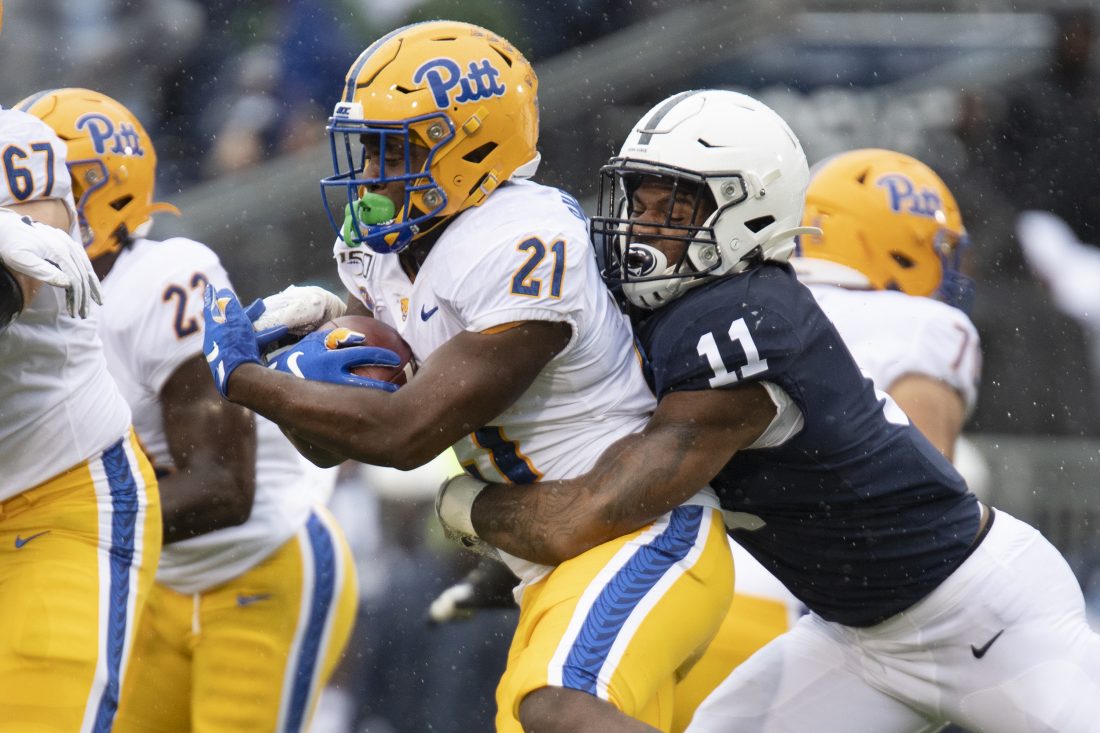 UNIVERSITY PARK — Penn State kept taking shot after shot deep down the field during Saturday’s game, and while the Nittany Lions usually hit a number of those, that wasn’t the case so much against Pitt.

Clifford did connect with KJ Hamler for 53 yards on one pass and with running back Ricky Slade for 40 yards on another. But most of Clifford’s throws on the deep balls were just beyond the reach of his wideouts.

Penn State could have topped 30 points easily had some of those passes hit, providing a much bigger margin of victory. But all the misfires, plus failing to sustain a lot of drives, meant the Lions managed only 17 points.

“I need to get better,” Clifford said. “I missed my shots today, and that’s on me. It’s not on anybody else. I need to have an enhanced focus during the week on shots. I think that you get used to hitting big plays, and I wouldn’t say that during the week I lost focus on that, but I think that I got a little comfortable. And I just need to focus up.”

Hamler also took some of the blame.

“It’s more of a two-person thing, I think,” he said of the QB and receiver connection on deep passes. “It’s just communication, how he’s going to throw it, where I should break.

Journey to top of depth chart

Journey Brown got the start at tailback Saturday over Ricky Slade, and he carried 10 times for 109 yards, including an electrifying 85-yard run in the first quarter.

“Running like that, it felt good to open up,” Brown said.

Asked what he was thinking during the run, Brown replied, “We learn this in one of my classes, it’s like a flow concept. Everything just slows down. I don’t hear the crowd or nothing. I just hear myself breathing, and I just see everything around me. Then when I got tackled, that’s when I started hearing the crowd.”

Cain able to do big things

Noah Cain had a big impact on the go-ahead touchdown drive in the third quarter. He caught a pass and ran for 13 yards early on the drive, and he carried six times for 40 yards, finishing it off with a 13-yard scoring run for a 17-10 lead with 5:50 to go in the third.

Penn State uses a rotating running back system, though, and surprisingly, Cain didn’t get another carry the rest of the game.

Slade had only four carries for 6 yards, while Devyn Ford had five carries for 9 yards and a touchdown.

Hamler said there was a good bit of it going on during the game between both teams. He also said he enjoyed it since he knows some of the Pitt players.

“There was a lot of smack,” Hamler said. “I know some of them boys — Damar Hamlin, Paris Ford, I’m cool with those guys — so it’s mostly friendly competition. But those are always the funnest games when you’ve got your boys out there playing against them.”

The start of the game was delayed 34 minutes because of lightning and the threat of severe weather in the area. An announcement was made over the PA system for fans already in Beaver Stadium to seek shelter, and the gates were closed to prevent more fans from entering. Fans also were asked to return to their cars for shelter during the delay.

Rather than a lengthy delay, things got going quickly once the weather cleared and the stadium filled up.

Pitt fumbled a punt early in the fourth quarter after a big hit by PSU gunner Dan Chisena, but Chisena was flagged for kick-catch interference. Many fans were upset at the call after seeing the replay, thinking it was a good hit.

But the rule does clearly state that the gunner has to give the receiver room to catch the ball. Here’s how the rule reads: “It is an interference foul if, before the receiver touches the ball, a Team A player enters the area defined by the width of the receiver’s shoulders and extending one yard in front of him. When in question it is a foul.”

The Lions got a commitment Friday from three-star offensive tackle Ibrahim Traore from Frederick Douglas Academy in New York. Traore is rated the No. 6 overall prospect in New York and No. 70 tackle in the nation by 247Sports.

Former Penn State quarterback Tommy Stevens had a rough day for Mississippi State in its 31-24 home loss to Kansas State.

Stevens threw two interceptions and lost a fumble. He then was benched in favor of freshman Garrett Shrader. Stevens played despite missing time last week with a shoulder injury.

Heisman Trophy winner and NFL legend Tony Dorsett was Pitt’s honorary captain for the game, while quarterback Daryll Clark was PSU’s honorary captain. … Punting was excellent for both teams, as PSU’s Blake Gillikin and Pitt’s Kirk Christodoulou each came through with numerous big kicks to pin the other team back.