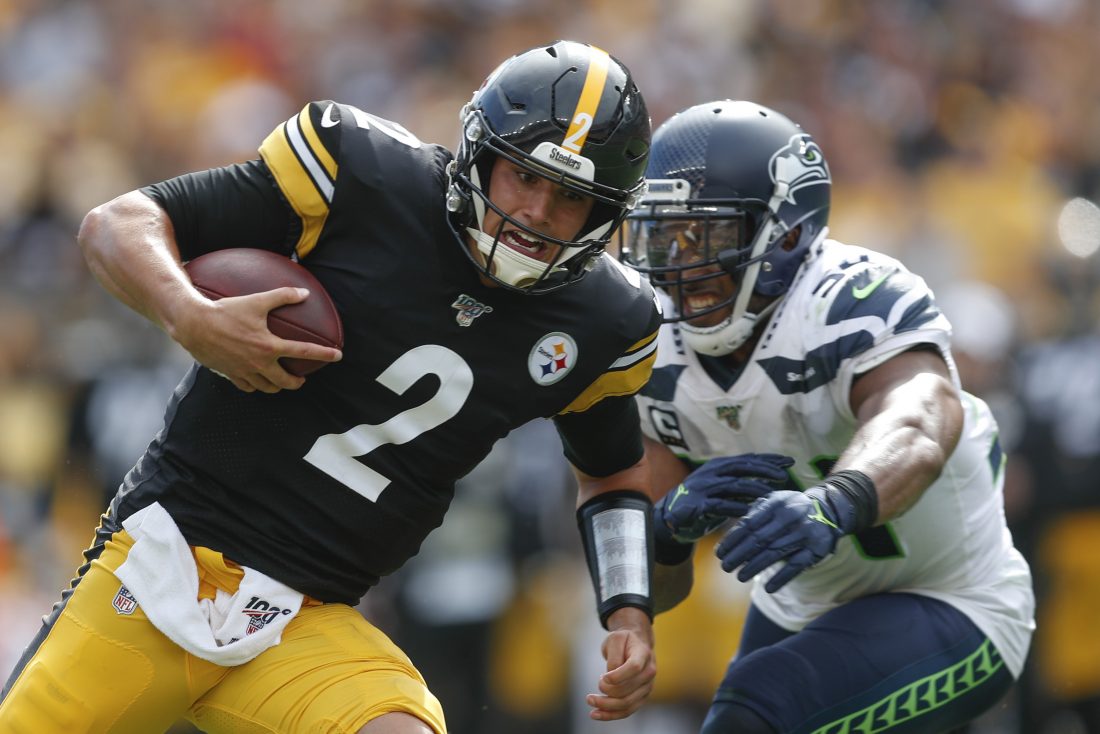 Pittsburgh Steelers quarterback Mason Rudolph (2) scrambles past Seattle Seahawks middle linebacker Bobby Wagner (54) for a first down in the second half of an NFL football game, Sunday, Sept. 15, 2019, in Pittsburgh. The Seahawks defeated the Steelers 28-26. (AP Photo/Don Wright)

PITTSBURGH — The faces around Russell Wilson have changed as the Seattle Seahawks rebuild themselves on the fly. One thing, however, has not. Seattle goes as its ever imaginative quarterback goes.

And in the second half in a place where the franchise hadn’t scored let alone won in two decades, Wilson’s resilience propelled the Seahawks to their best start in six years.

Wilson threw for 300 yards and three touchdowns to give the Seahawks the lead, then used his legs and smarts to protect it in a 28-26 victory that pushed Seattle to 2-0 for the first time since 2013, the year Wilson guided the franchise to its only Super Bowl victory.

Sure, it’s early. Yet the Seahawks proved both opportunistic and aggressive, hallmarks of their dominant run behind Wilson and the “Legion of Doom” defense earlier in the decade.

“Really fired up about this start,” Seattle coach Pete Carroll said after picking up his 100th victory with the Seahawks, including playoffs. “We have so much improvement. We have so many areas and ways we can get better.”

Having Wilson certainly helps. His perfect 28-yard rainbow to rookie DK Metcalf midway through the fourth quarter put the Seahawks in front by nine, and three expertly timed scrambles on Seattle’s final drive helped drain the final 5:34 off the clock.

“We were battle tested today and we found a way to win a great game,” said Wilson, who completed 29 of 35 passes while becoming the fifth-fastest player in NFL history to reach 200 career touchdown tosses.

The Steelers fell to 0-2 for just the second time in Mike Tomlin’s 13-year tenure and could be without quarterback Ben Roethlisberger indefinitely. The 37-year-old watched the second half from the sideline in a baseball cap following a right elbow issue that popped up late in the second quarter when he grimaced several times after releasing passes.

“We lost a number of guys in this game, but that wasn’t the reason we didn’t win the game,” Tomlin said.

Backup Mason Rudolph completed 12 of 19 passes for 112 yards with two touchdowns and an interception, but couldn’t quite keep pace with Wilson and the Seahawks.

“I am completely confident in myself, being a leader of a team, and playing games,” Rudolph said. “That’s what it all comes down to. If (Roethlisberger is out a while), I’m ready to roll.”

A week after escaping Cincinnati with a one-point win, a game in which Carroll said his team wasn’t particularly crisp, the Seahawks took advantage of a series of mental mistakes by the Steelers to win in Pittsburgh for the first time in 20 years.

Wilson’s first touchdown pass to Will Dissly — a 14-yarder in the second quarter — came after Steelers defensive tackle Dan McCullers was called for a personal foul on a field goal attempt by Seattle. The Seahawks took the first down instead of the points, and on the next snap Wilson hit a soaring Dissly for the score.

Seattle went in front early in the second half when a pass from Rudolph to Donte Moncrief went through the receiver’s hands, smacked off his facemask and landed in the arms of Seahawks safety Bradley McDougald. Wilson found Dissly again for a 12-yard score seven plays later.

“It shows our guys we can do it, we can go cross country in the morning and play good football,” Carroll said. “They did a fantastic job.”

Pittsburgh trailed by two in the fourth quarter and appeared to have momentum with the Seahawks facing a third-and-20. Wilson threw a jump ball for Tyler Lockett and the pass fell incomplete. But Carroll challenged the play, claiming Steelers safety Terrell Edmunds interfered with Lockett. The 38-yard penalty was enforced after review. Three plays later, Wilson placed the ball perfectly into Metcalfe’s outstretched hands while Edmunds gave chase.

After managing just 32 yards on the ground in a Week 1 loss to New England, Pittsburgh managed 81 but 23 came on a burst by Benny Snell and 7 on a scramble by Rudolph. James Conner had just 33 yards on 11 carries, including 12 yards on seven carries in the first quarter.

“We can’t keep drives going,” guard David DeCastro said. “We’ve got to start faster in these games. You don’t start fast, you don’t have a chance to run the ball. Other teams get control.”