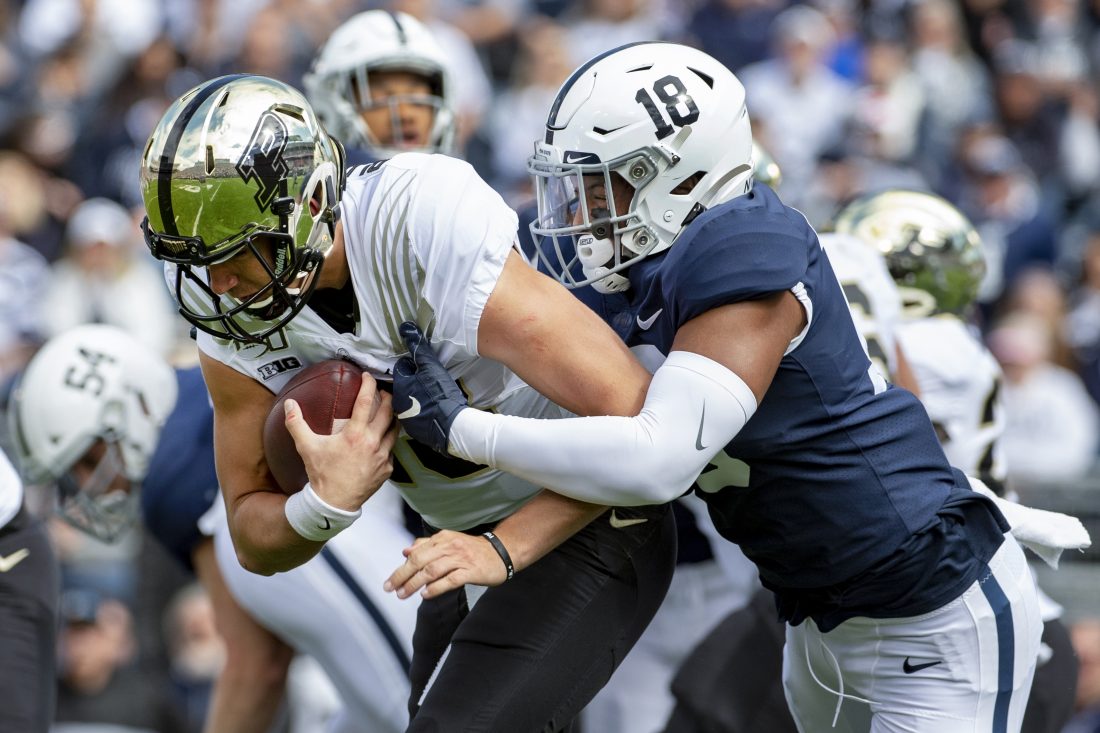 UNIVERSITY PARK — Noon starts haven’t always brought out the best in the Nittany Lions, but that wasn’t the case Saturday as Penn State was on top if its game early and built a 28-0 lead against Purdue.

Then, apparently, the Lions got drowsy and needed an afternoon nap because they sure took one.

“Defensively,” James Franklin said after PSU’s 35-7 victory, “we’re doing some special things right now. Our defense is playing championship level, and we’ve been doing it for a number of weeks.”

While the offense sputtered and the special teams sprung several leaks, the Lions’ defense ruled the day.

The unit wound up with 10 sacks — their highest single-game total since they made 11 against Illinois in 1999 — and limited Purdue to rushing yardage total of minus 19. In total, the Boilermakers managed a mere 104 yards.

“It starts up front,” Franklin said.

For the season, the defense has yielded just four touchdowns and came into Saturday second in the nation in fewest points allowed (now 7.4 per game).

Shaka Toney led the way with three sacks, two in the first quarter.

“We emphasized the pass, and Shaka set the tone,” Parsons, who got his first two sacks of the season, said.

“It’s always a race to the quarterback,” defensive end Yetur Gross-Matos, who added two sacks, said. “When one person starts to get going, I feel like it’s infectious. And the linebackers and DBs are giving us a chance to get home.”

The Lions ended up forcing 12 punts and were especially dominant on third down, allowing Purdue just one conversion on 14 tries.

“We have a lot of people making plays across the board,” Gross-Matos said. “Not just the starters but people coming off the bench and playing to the same standard. It’s just a mentality.”

After the first quarter, the Lions looked like they were on their way to a second-straight domination and, though they awaken this morning at 5-0, they are not taking the same swagger into the meat of their schedule that they carried out of College Park a week ago.

But how surprised should we be?

Maryland is not a measuring stick, not with three straight TD-less efforts against the Lions.

Purdue, for all its injuries, represented a little better test, and thanks to the defense, Penn State passed.

Sean Clifford did not sustain his early start, and with the exception of freshman tailback Noah Cain, who may soon become the starter or at least deserves to be, the Lions could not get their running game going consistently.

Penn State racked up 206 yards of offense in the first quarter on 18 plays and 254 yards on its next 57 plays.

Penn State’s players arrived at the media room Saturday just moments after Michigan’s 10-3 victory over Iowa was complete. They said they hadn’t heard the outcome, but either way, a trip to Kinnick Stadium almost never produces a high score for the visiting team.

“It’s an incredible environment, and I think we’re going to go out there and be ready for it,” Gross-Matos said. “We’re 5-0, and I’m feeling really confident in the team, my unit, our whole organization.”

While some games in the Penn State-Iowa series have been lower-scoring — many, of course, will never forget 6-4 — Franklin’s teams have averaged 30 points per game against the Hawkeyes.

Just in case the offense hasn’t replaced the second-quarter fuse it blew here Saturday, the defense is eager to hold up its end.

Though Iowa proved Saturday it’s not a great team in failing to score a touchdown against a Michigan club that was drubbed by Wisconsin 35-14, this clearly is the first real season-shaper for Penn State.

But in order to firmly stamp themselves as a Big Ten championship contender, you would think the Nittany Lions’ offense will need to close the gap with their defense.

And to the defense’s credit so far, as it showed once again Saturday, that will be hard to do.

Rudel can be reached at nrudel@altoonamirror.com.