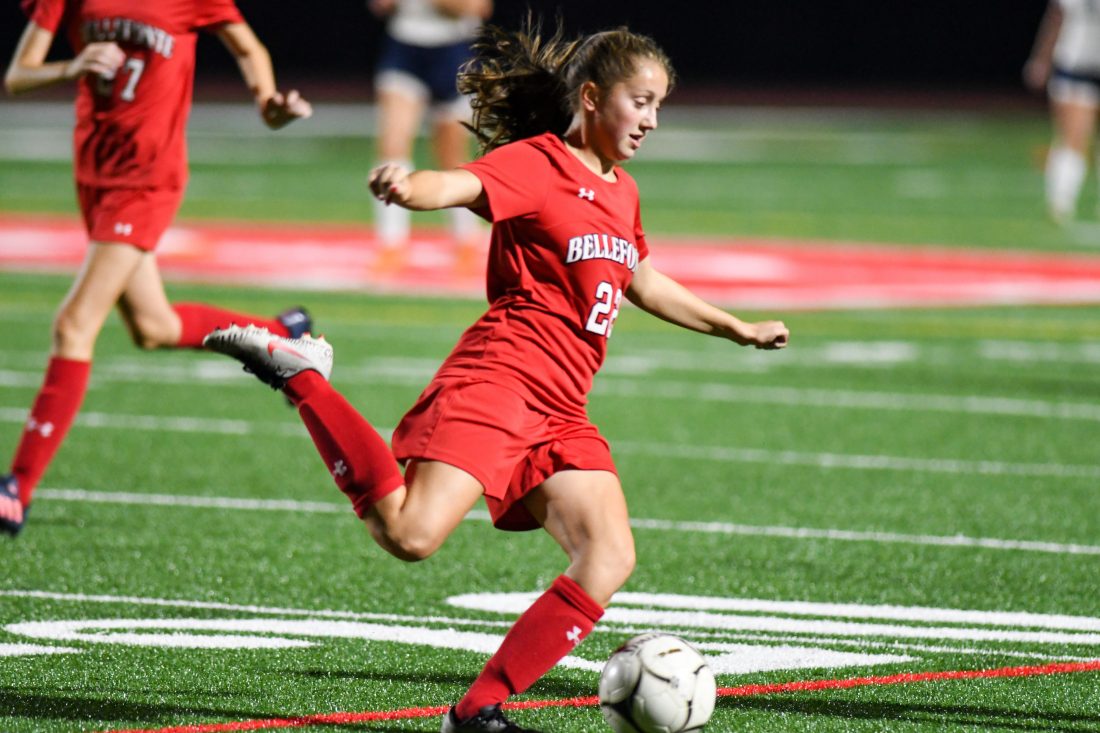 BELLEFONTE – The new starter was cool under pressure.

Haley Popovitch, in her debut as Bellefonte’s goalie, seemed primed and ready to make a statement and get her team the much-needed victory.

Not only was she one of the big factors in the Red Raiders’ 1-0 victory Tuesday over Penns Valley but she opened her varsity career posting a shutout.

“We are super proud. Haley is our JV keeper who we pulled up tonight for her first varsity start. We are super proud of her,” said Bellefonte coach Stacey Miller. “She was really tough in goal and played tough for us.”

It was quite a way of starting your career.

It was a back-and-forth battle that wouldn’t be decided until late in the second when the Red Raiders got the ball up the field and got it to the left corner.

Madison Hubbs got the ball and took a shot, and it was deflected by a Rams defender and bounced back to her. She then got the ball right back and placed it the top corner of the goal on an unassisted goal at 8:23.

With the game sitting at a scoreless tie coming out of the break. The Red Raiders took the ball down into the Penns Valley end.

However, the Rams would exchange numerous momentum shifts that would take place.

Each time the defenses would respond and send the ball back down into their opponent’s end.

For almost 38 minutes, both offenses would go back down the field empty handed.

As the game wound down, the game pace became more frantic and it was looking as if whoever scored the first goal would come out with the win.

Penns Valley was able to contain 100-goal shooter Mallorie Smith in check, allowing her just to be a distributor instead of allowing her an open shot.

Penns Valley got some strong breakaway attempts by Katie Martell.

“I thought we had a very good first half. We were combining and getting our chances we just couldn’t capitalize on it,” said Penns Valley coach Andrew Beverly. “We kind of rushed some shots a bit. We played a good half where we could be up by two or three goals but it was 0-0. In the second half we had some moments. I think we tired out. Ultimately, it came down to a little bit of a mistake on our part and they capitalized and that’s kind of how it goes in the Mountain League.”

At the 15-minute mark, Bellefonte started to knock on the door of putting one in but Rams goalie Kylie Auman and her defense on the back-line continued to frustrate Bellefonte.

With 8:23, Hubbs got a rebound of her first shot and sent one flying to the top corner of the goal for the Red Raiders goal.

From there, Bellefonte’s defense had one mission, which was keeping the Rams out of the box and to not allow any open shots.

As time was running out, Penns Valley’s Mel Hosterman started a breakaway but as she was looking to get one last shot, she was stopped by Sarah Tobin, allowing the time to run out.

Auman would finish with seven saves while Popovitch tallied 16.

Penns Valley outshot Bellefonte 23-17 and neither team posted a corner opportunity all evening.