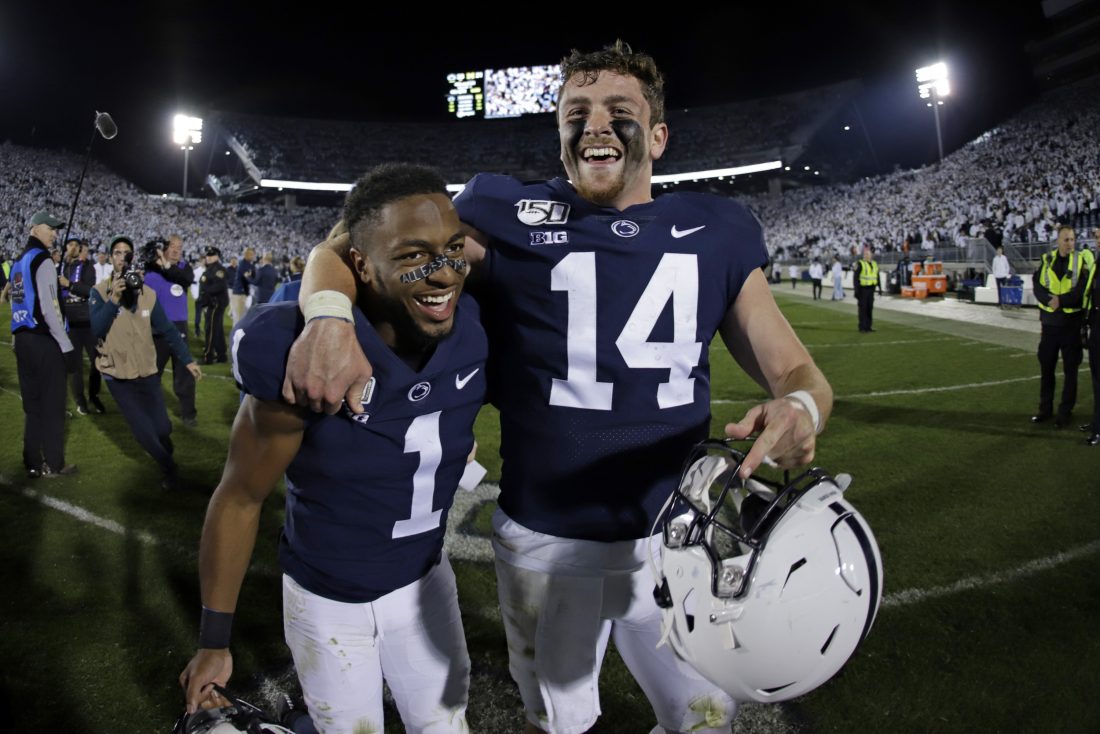 UNIVERSITY PARK — We’re all looking for reasons to feel great about Penn State, to believe that this undefeated squad that will be ranked at least No. 6 in the country this week legitimately is one of the best teams in the country and has a strong shot at the College Football Playoff.

But can you feel great after what you watched Saturday night?

Do we really believe Penn State is anywhere near as good as Alabama? Or Clemson? Or Ohio State?

Winning is all that matters, right?

Penn State held on to beat Michigan, 28-21, and gets to feel great about itself for another week.

If the Lions keep winning and go into Columbus in five weeks and beat the Buckeyes, they would be right there on the cusp of earning their first CFP berth.

Which would be tremendous for this team, the program, the fans, James Franklin and everyone else.

The thing is, how good is Penn State really?

Do we even know, seven games into the season?

The Lions looked awesome for a quarter and a half Saturday night, jumping out to a 21-0 lead over Michigan.

After that, however, the Wolverines outplayed Penn State and nearly came all the way back. They dropped a sure touchdown that would have tied it with 2 minutes to go, and no matter how you slice it, that was pure luck for PSU.

Franklin seemed to sense that people would be feeling uneasy about the win, because he made several comments in the postgame about how he understands his team didn’t play all that great.

“We’ll critique the heck out of this,” Franklin said. “Find a way to get better. … We’re 1-0. That’s always the goal. There’s a lot of teams around the country that aren’t 1-0 tonight, so we’re going to enjoy it.”

That 1-0 aspect is the most important thing. Just ask Wisconsin, which suffered an absolutely stunning loss to Illinois, 24-23, despite being favored by 31 points.

“There’s no doubt we’ve got to get better. We all do,” Franklin said. “But great win.”

Great win, but far from a great performance by the Lions.

This is a Jekyll and Hyde team that looks fabulous for parts of games, then mysteriously some flip is switched and the offense looks completely disinterested for large stretches.

We saw it a few weeks ago against Purdue when, after building a quick 28-0 lead, the offense went into cruise control for two quarters and did nothing.

The same thing happened Saturday night after PSU went up 21-0.

The coaches kept refusing to put the team’s best running back, Noah Cain, in the game.

What looked like it could be a 42-10 kind of win turned out to be the kind of game where Penn State needed a Michigan player to drop a pass in the end zone to avoid possibly going to overtime.

The offensive issues put a lot more pressure than necessary on the defense, which started to look rather ordinary in the second half as Michigan mounted its comeback.

It’s just so weird. Why does this very talented team just start sleepwalking in games?

Franklin has to get that figured out.

Again, the Lions won. They woke up in time and got a big 53-yard TD pass from Sean Clifford to KJ Hamler, which turned out to be the decisive score.

“We made plays when it was needed,” Franklin said.

But should it come down to that? If you’re the better team, don’t you need to find ways to step on the other guy’s throat and put him away?

This Penn State team is lacking in that aspect, and it’s a concern.

No, it hasn’t cost the Lions a game yet, but as you watched things unfold Saturday, surely you were thinking to yourself, “This isn’t going to cut it against Ohio State.”

And that’s the point. No matter what Penn State has done so far, no matter if it goes into Columbus undefeated, there’s always that feeling of: Are they good enough to actually beat the Buckeyes?

Right now, early lines have Ohio State favored by 13 ½ points over PSU. So clearly Vegas doesn’t think the Lions are on the same level as the juggernaut team that has destroyed everybody.

Penn State is having an excellent season at 7-0, and at times in games can look like a terrific team. But at other times, you just wonder what the heck is going on.

The Lions have five weeks to figure all that out. And that’s if their inconsistent play doesn’t come back to really haunt them in key games coming up at Michigan State and Minnesota.

Cory Giger can be reached at cgiger@altoonamirror.com.