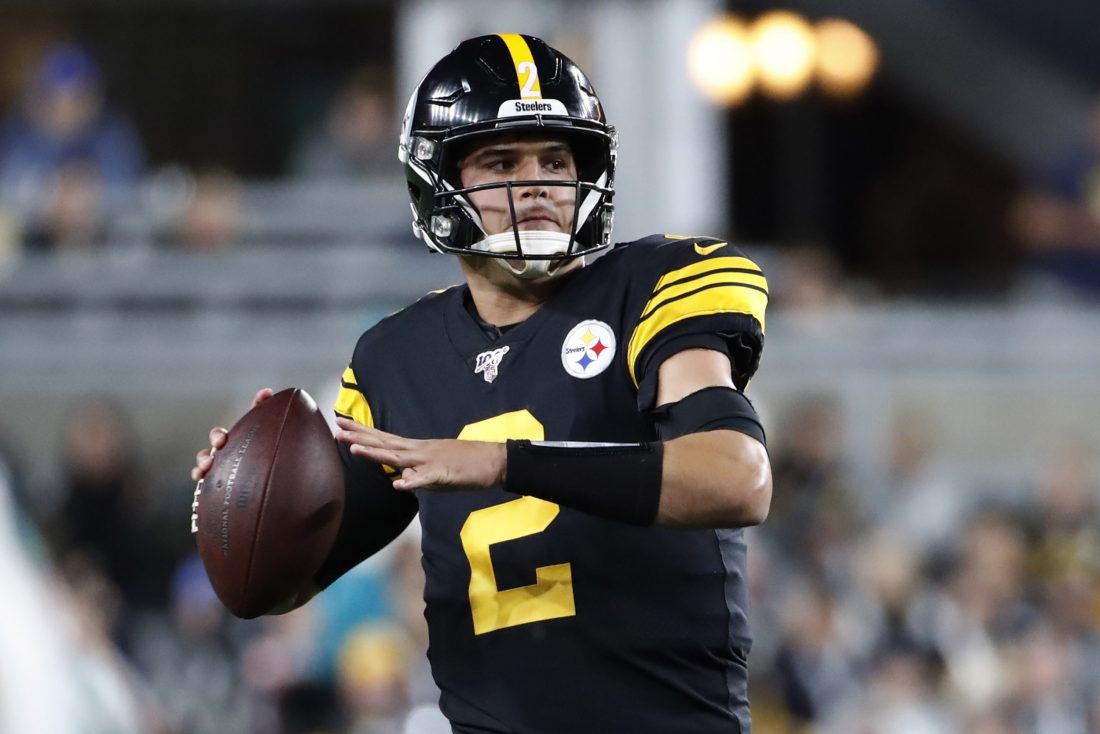 Pittsburgh Steelers quarterback Mason Rudolph (2) looks to throw a pass during the first half of an NFL football game against the Miami Dolphins in Pittsburgh, Monday, Oct. 28, 2019. (AP Photo/Don Wright)

PITTSBURGH — Jacoby Brissett has been in Mason Rudolph’s spot before. Several times actually.

The Indianapolis Colts quarterback knows what it’s like to step in for the face of the franchise. He did it for Tom Brady in New England in 2016. He did it again for Andrew Luck when he arrived in Indianapolis two years ago.

When Luck stunned his teammates and the rest of the league by announcing his retirement near the end of training camp , the player best prepared to absorb the news is the one who has the Colts (5-2) in first place heading into Sunday’s visit to Pittsburgh (3-4), where Mason Rudolph is starting to find his footing while filling in for the injured Ben Roethlisberger.

Fast forward two months, and the anxiety of August has turned into quiet optimism as November opens. Brissett is rolling . The Colts are atop the AFC South. And no one is asking about Luck anymore.

“No one views him as a backup going in for a guy,” Indianapolis coach Frank Reich said. “This is Jacoby’s team.”

The Steelers aren’t quite there with Rudolph, partly because Roethlisberger firmly intends to return in 2020 after undergoing season-ending elbow surgery in mid-September.

Still, there were signs during last week’s comeback victory over the winless Dolphins that Rudolph can be more than a caretaker. After a shaky start in his first action since getting knocked unconscious against Baltimore on Oct. 6, Rudolph threw for 251 yards and two touchdowns , his confidence seeming to grow with each series.

“We didn’t need to see that. We’ve been working with him now going on a couple of years, and that’s just kind of in his DNA,” Steelers coach Mike Tomlin said. “That’s one of the reasons why the guys rallied around him and believe in him.”

It’s a belief Pittsburgh will need to build on if it wants to entertain any thoughts of chasing down front-running Baltimore in the AFC North. The efficient Colts present a far more formidable challenge than Miami. Yet the Steelers believe they’ve already endured the worst of what 2019 has to offer. The metaphorical train Tomlin talks about as a symbol of the season is picking up steam. Tomlin’s players believe they are too.

“One guy doesn’t define a team,” safety Terrell Edmunds said. “We’re also on that same path (as Indianapolis). We started slow at the beginning of the year but we’re turning it around one game at a time. We’ll get to where we want to go.”

But this has been no typical season for the league’s career scoring leader. He missed five of his first eight kicks then missed two more last week against Denver. Still, Reich never doubted Vinatieri’s ability to deliver — even if that happens to be in one of the league’s tougher venues to kick.

“There’s no one else you want going out there to kick to win the game,” Reich said. “You have twenty-some years of maintaining that type of thing. A bad kick or two, a miss or two isn’t going to affect years and years and years of what he’s done.”

Pittsburgh running back James Conner put together his best game in a year against the Dolphins, running for 145 yards on 23 carries. That 23rd carry, however, came at a cost. He injured his shoulder and his status against the Colts is uncertain at best. If he can’t go, Jaylen Samuels will take over in the backfield. Samuels hasn’t played since undergoing knee surgery on Oct. 7.

“We got the depth in the running back room to handle the situation we’re going through,” Samuels said. “I believe in everybody. I believe in this team, the O-line, the coaches. If we all just believe in each other and execute, we’ll be good.”

IF THE TURNOVER FITZ

Steelers safety Minkah Fitzpatrick is thriving nearly two months after being acquired in a trade with the Dolphins. Fitzpatrick already has three interceptions and a fumble recovery in five games, one of the main reasons Pittsburgh already has 19 takeaways this season, four more than it managed all of last year.

“We’re not surprised by what we’re getting,” Tomlin said. “Hopefully it not only continues, but it improves as he gets his feet on the ground and gets a sense of not only what he’s doing, but how it fits into the big picture of things.”