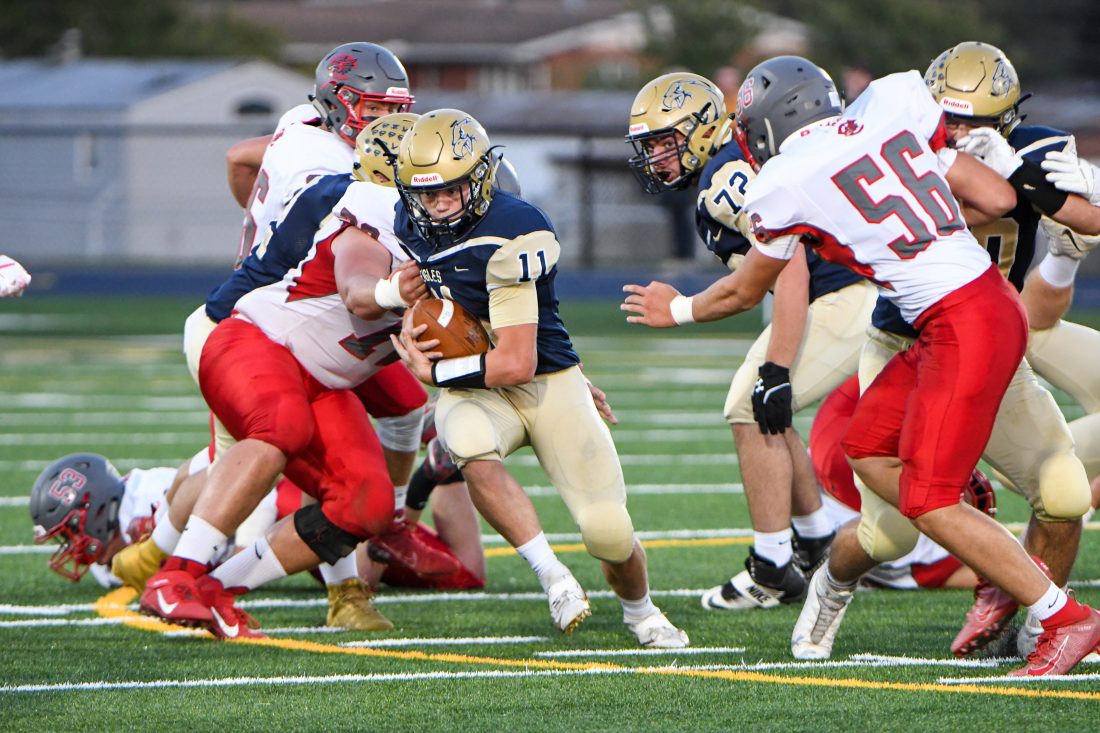 After finishing 2017 with a losing record, the Eagles squad regrouped to finish 11-3 with a District Championship. Their season ended after suffering a 28-7 loss to Sharon in the State Semifinal matchup– but the success energized the team as they’re looking to replicate last year’s accomplishments and capture a district crown for the second straight year.

Bald Eagle Area opens its postseason tonight at Alumni Stadium versus the 4-6 Central Dragons. With the bulk of its arsenal finally healthy, the Eagles are anxious to get the playoffs underway.

“We’re really excited,” BEA coach Jesse Nagle said. “They’ve been waiting for this moment since last year when we got bounced out of the state quarterfinals.”

“It’s just a different feel this week,” Nagle added. “The kids are back with a little more focus, a little more energy and to be honest we’re a lot healthier.”

Injuries decimated the Eagles with numerous key athletes sidelined over the season. They were banged up so bad that they rested all their starters in their regular-season finale against Bellefonte.

“For 2-3 weeks we’ve had out 5-10 guys,” Nagle said. “So now we actually have guys back and we’re getting used to playing with them again. Now there’s still two or three kids who are doing light-contact drills and are going to be game-time decisions, but even having them at practice and doing those things is definitely different than what we’ve had the last couple of weeks.”

Tonight’s contest is the second meeting between the teams this season. BEA won the first outing, 29-7, without the aid of quarterback Jaden Jones who was sidelined with an injury.

Central enters its playoff opener on a three-game losing streak, being outscored 102-16. They’ve taken a step back in recent weeks but Nagle expects them to bring their A-game against the Eagles.

“They’re a very physical team,” Nagle said of the Dragons. “They’re going to give you everything they got, every single play.”

Central runs a dual-quarterback system. Senior Braden Kitt has attempted the bulk of the offense’s throws, but freshman Jeff Hoenstine has a 14-3 edge in touchdown passes. The two quarterbacks are also Central’s two-leading rushers and totaled 11 of the team’s 13 rushing touchdowns so far this season.

“Offensively, they’re going to live by getting the ball on the edge and getting their playmakers the ball,” Nagle explained. “They probably throw [twice as much as they run].”

Defensively, Central has a solid 20 sacks and six interceptions.

“They’re good at bringing guys from all different places,” Nagle said. “They like to bring five or six guys every single time and run press coverage behind that. We know we’re going to get a lot of pressure.”

WHAT TO EXPECT FROM BEA

It’s win-or-go home for BEA, so expect the Eagles’ top stars to touch the ball early and often.

Nagle was careful to fully utilize Gage McClenahan this year as the senior nursed a knee injury. But now healthier, and with the reality of being eliminated, Nagle expects the offense to feature a heavy dose of McClenahan tonight.

OFFENSE OUT OF SYNC?

The Eagles ended their season with back-to-back goose eggs on the scoreboard and were outscored 80-0 over the stretch. They haven’t scored since their 36-28 win against Clearfield on Oct. 11, but the consecutive shutouts doesn’t have Nagle concerned.

BEA had opportunities to score against Jersey Shore. Three times they reached inside their opponents’ 5, only to be denied by a stingy Bulldogs defense. Also, they pulled all their starters in the second half which heavily contributed to the shutout.

Against Bellefonte they elected to rest all their starters, which resulted in a 38-0 loss in the Curtin Bowl. If anything, the scoreless outings have more to do with taking caution against fatigue rather than a lack of execution.

“These guys played 14 games last season,” Nagle said. “So now we’re hopefully going to be the closest to healthy that we’ve been all year long. We’re potentially going to have one or two guys out, and we haven’t seen that all year long.”

Unlike their performance against Jersey Shore, the Eagles need to finish drives tonight and limit Central’s pass rush.

On defense Nagle wants them to deny the big plays and make Central drive the field.

BEA WILL WIN IF