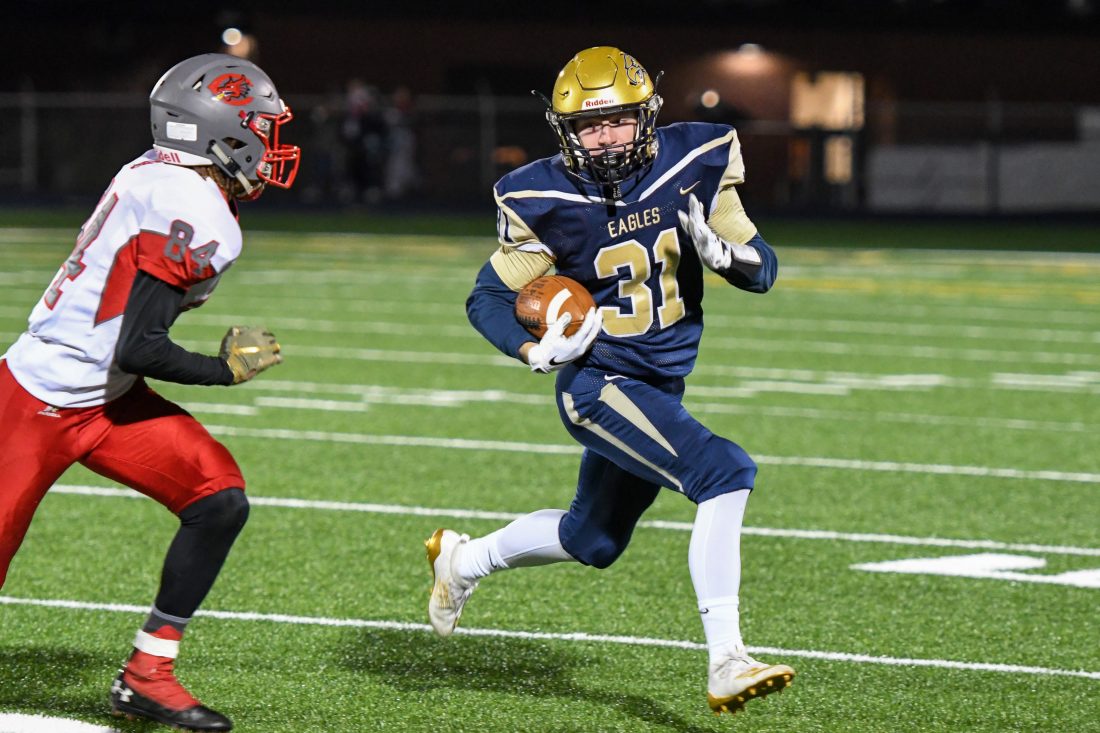 WINGATE – The Eagle defense led BEA to the next round. Just ask the Central Dragons as they fell victim to a very stingy defense of Bald Eagle that tightened when it needed to, to advance to the District 6 championship next Friday.

The defense did just that holding on for the 21-19 victory in the opening District 6 Semi finals.

With time running out in the fourth quarter, the Bald Eagle Area football team needed its defense to hold onto a 21-19 advantage as Central’s offense took the ball at the 36.

Having two chances within six minutes it looked like the Dragons were gaining the momentum after scoring early in the period.

But each time the Eagles dug and forced a punt then a fourth down and long to put the game on ice.

“They (Central) did a lot of things they haven’t done all-year round. They gave us two backs and moved some kids around. They did a nice job coaching and the kids did great job of adjusting,” said Bald Eagle coach Jesse Nagle. “It took our linebackers a little to get used to but I thought they did a good job making the adjustments and coming up big when we needed to.”

Heading into the final stanza, the Eagles held a 21-12 advantage over the Dragons.

However, Central started with the ball at its own 44 and marched down on a 7-play drive where Jeff Hoenstine broke through some tackles and muscled his way in from 14-yards out, cutting it to a 3-point contest.

The Dragons decided to kick the extra point instead of the 2-point conversion, cutting the lead to just two.

But the defense was cool under pressure as it held and hung on for the victory.

Central drew first blood in the game as it scored with only 2:43 left in the first.

Hoenstine found a wide open Hunter Klotz from 8-yards out to put them on the board at 6-0. The PAT went wide, which would come back to haunt the Dragons later on.

But less than a minute into the second, the Eagles put their first touchdown on the board when Kaden Bittinger muscled through the front line for a 1-yard touchdown run, kicker Carter Stere put his team up by one with the successful PAT.

On the ensuing kick, the Eagles converted an on-sides kick attempt when the ball found its way into Gage McClenahan’s hands. It would be the first of three fumble recoveries he would make Friday night.

Despite the drive failing, McClenhan would be at the right place at the right time to get another recovery, this time giving his team the ball on the Central 46.

A play later, Bittinger hit a wide open Matt Reese for the 54-yard touchdown hook up, making it a 14-6 contest.

With time running out in the second, the Dragons pulled within two on a Braden Kitt 5-yard pass to Ben McConahay.

Bald Eagle’s defense stood up and refused to allow Central to convert a 2-point conversion, keeping the lead at 14-12.

But Central had one last chance to go ahead before the half.

The Dragons lined up for a field goal from the 27 but it went wide and the Eagles kept the advantage when the two teams went into the intermission.

Bald Eagle added to its lead and scored its last touchdown on the night when McClenahan tapped off a 7-play drive that he started with his final fumble recovery of the day, scoring from a yard out.

With the win, the Eagles will look to capture another D6 Championship when they play the winner of Huntingdon/Westmont Hilltop At Altoona’s Mansion Park.