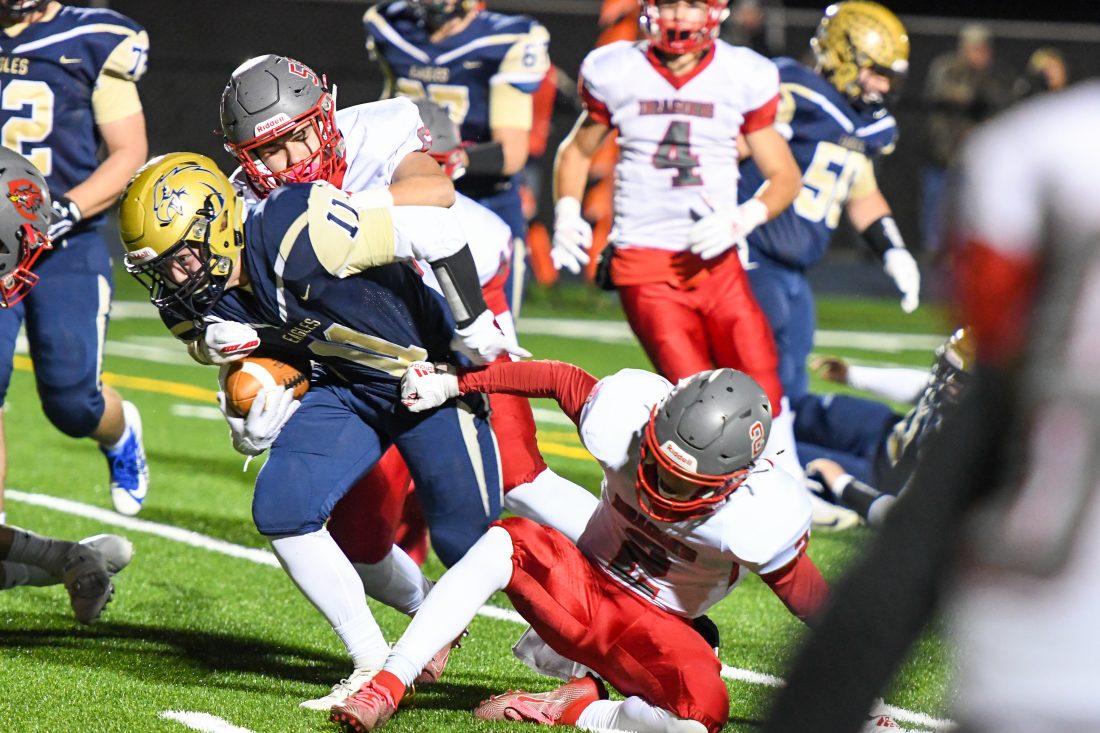 WINGATE- The Eagles are a win shy of conquering one of their preseason goals, and the last hurdle is a surging Westmont-Hilltop team looking to capture its sixth consecutive victory of the season.

The Bald Eagle Area Eagles battle the Hilltoppers tonight at 7 p.m. in Altoona in the District 6 championship game. The game occurs on the one-year anniversary of BEA’s 21-16 nailbiter win over Forest Hills in last season’s district title game, and the Eagles are hoping for that same magic again tonight when they return to Mansion Field.

“The boys are very, very excited,” BEA coach Jesse Nagle said. “Last year they had a taste of it, and they of course had the opportunity to put the medals around their necks, so anytime you do that you’re extremely excited about getting back there and having that opportunity to potentially do it again.”

BEA is fresh off a 21-19 win against Central last week, and with the game occurring last Friday the Eagles had a bonus day of preparation for tonight. The added 24 hours was an asset and allowed the Eagles to better adjust to the Hilltoppers’ heavy-run and tight offense.

“It’s definitely beneficial for us to have the extra day, because it allowed us to rep the kids a little more about their roles and their assignments,” Nagle explained. “We have a lot to prepare for because in our conference there are a lot of spread offenses who spread out the ball, but with Westmont they pack it in and they want to run the ball right at you.”

SIZING UP THE HILLTOPPERS

The Hilltop offense is as one-dimensional as it gets. Roughly 93 percent of its offense is accumulated on the ground as the run-heavy team averages an absurd 320.5 rushing yards per game and an obsolete 23.4 yards through the air.

The Hilltoppers are devoid of any 1,000 yard rusher, but they have three ball carriers with over 800 in the season. Hudson Holbay leads the team with 878 yards and 13 touchdowns. Mason Muto slightly trails with 856 yards but a team-high 15 touchdowns and Zane Blackburn has another 843 yards and six scores on the ground.

As talented as the trio are, Nagle knows the bunch’s numbers are boosted by their dominant offensive line. Nagle estimated their starters’ average weight is 270 pounds, so the Eagles will have their work cut out for them.

“They’re gonna hammer you and beat you in until you break,” Nagle said of BEA’s opponent. “It’s their philosophy to get three or four yards, they do that every single play. Then on 4th down it’s 4th and less than two, so they’re going to go for it because they feel very strongly about their size up front.”

It’ll be interesting to see how the Eagles react to the Hilltoppers’ size advantage, especially at the line of scrimmage.

Nagle plans to negate Westmont’s physical attributes with his team’s pure athleticism, as well as some scheme adjustments.

“We’re going to give them a whole bunch of different looks and schemes to confuse them a little bit,” Nagle said. “And we’re definitely going to play with everything we’ve got. The kids need to play low and try to get some leverage on them. And we’re going to probably rotate 10 guys in our front five to keep them fresh and wear them down, instead of them wearing us down.”

BEA can get their ninth victory of the season if they play consistent and error-free football on both sides of the ball.

BEA’s offense was hampered by a few poor throws and wrong-route running last week against Central. If they want a district crown those mental-lapses can’t happen.

“We just got to sure everything up, play fast and definitively with some speed,” Nagle said. “I think speed is one advantage we have over them, especially with our skilled-guys.”

On defense they need to limit Westmont’s rushing attack because their passing game is non existent. A total-team effort and knowledge of individual roles is critical for the defensive unit.

“We got to play great-team defense, do our jobs and play our roles,” Nagle said. “Each kid has an assignment in front of them, so we have to make sure our eyes are on the guy who we’re assigned to.”

BEA WILL WIN IF

“We play great-team defense, and on offense we take care of the football and we capitalize on our drives,” Nagle said.