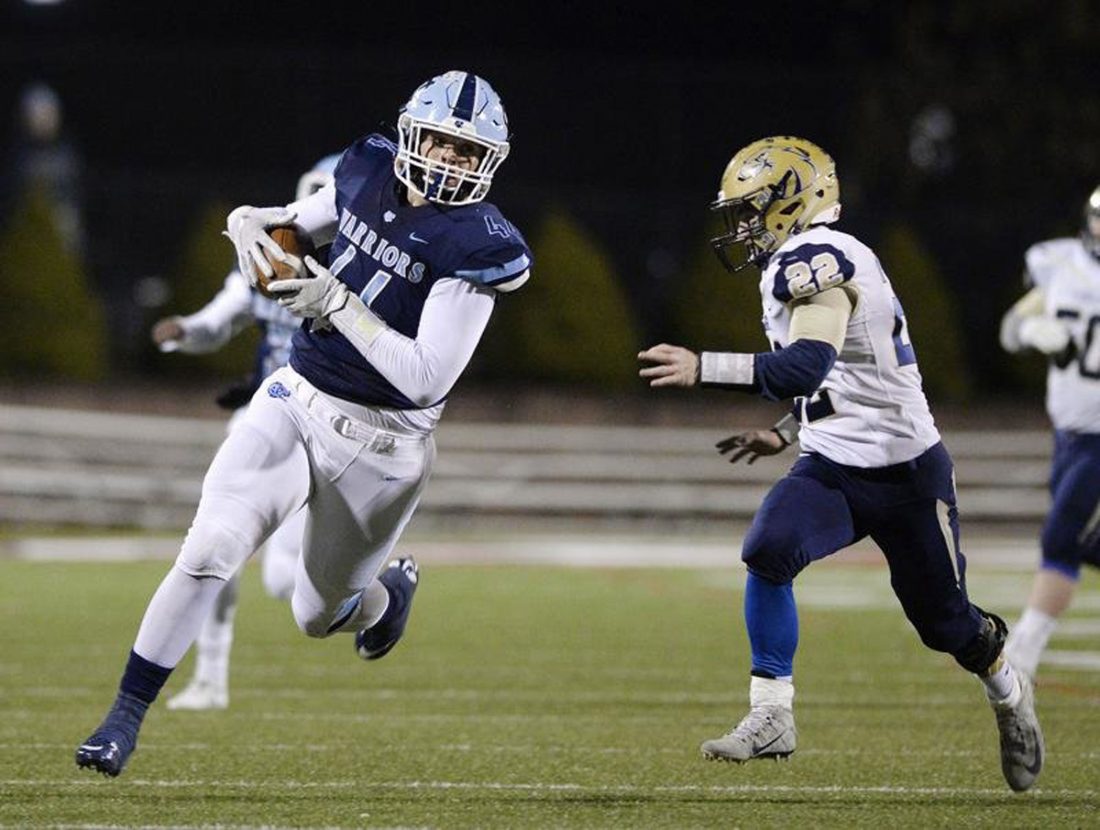 The Central Valley Warriors dropped District 6 champion Bald Eagle Friday night 45-0 in a state semifinal at Moon Area High School. The win sends Central Valley to the state championship game for the second time in the program’s 10-year history. The loss ended BEA’s season with a record of 11-4.

Just 95 seconds later, after Central Valley received the ball on the kickoff, Jaylen Guy scored on a 10-yard run to make it 8-0.

Central Valley opted to kick away from Bald Eagle return specialist Gage McClenahan all night, and it provided dividends on the kickoff following Guy’s touchdown. The high, short kick caromed off a Bald Eagle player and Central Valley recovered.

Ameer Dudley connected with Jawon Hall for a 30-yard touchdown pass on the next play from scrimmage to make it 15-0 and ignite the momentum..

An 8-yard touchdown pass to Myles Walker made it 22-0 in the second quarter. Dudley turned into a blocker on Central Valley’s next touchdown, as Michael Barbuto took the ball on a reverse. Dudley served as his escort, throwing a block that allowed Barbuto to beat the rest of the Bald Eagle defenders to the end zone for a 28-0 lead.

That lead held at the half, as Jayvin Thompson picked off Bald Eagle’s Hail Mary attempt at the buzzer. Dudley scored on a 6-yard touchdown two minutes into the third quarter to start the running clock and Ethan Ott added a 31-yard field goal.

Matt Merritt punctuated the night with a 90-yard interception return for a touchdown in the fourth quarter, Central Valley’s third interception of the game.

“These are all guys who are solid football players but they all flew under the radar. There’s no D-I, big-time prospects. Nobody’s getting the ink like they’re this great four-star guy,” CV coach Mark Lyons said. “These guys work at it together…They’re an unselfish bunch of guys and they get excited when someone else does something. They mobbed Matt Merritt like it was the game-winning touchdown. They’re happy for guys like that.”

Guy chipped in 93 yards on 15 carries, while Dudley proved problematic for the Bald Eagle defense. He extended plays in the pocket to connect with receivers downfield. If the pressure proved to be too intense, he took off and scrambled for yardage. Dudley completed 9 of 13 passes for 119 yards for two touchdowns, all in the first half, and two touchdowns in the first half and added 119 rushing yards on ten carries.

Central Valley is the fourth consecutive team from the Beaver Valley to head to the PIAA Class 3A championship game. Beaver Falls, Quaker Valley, and Aliquippa all reached the final, and each went on to defeat Middletown. The Warriors won’t see Middletown, though, and instead will take on District 2 champion Wyoming Area on Saturday at noon at HersheyPark Stadium.