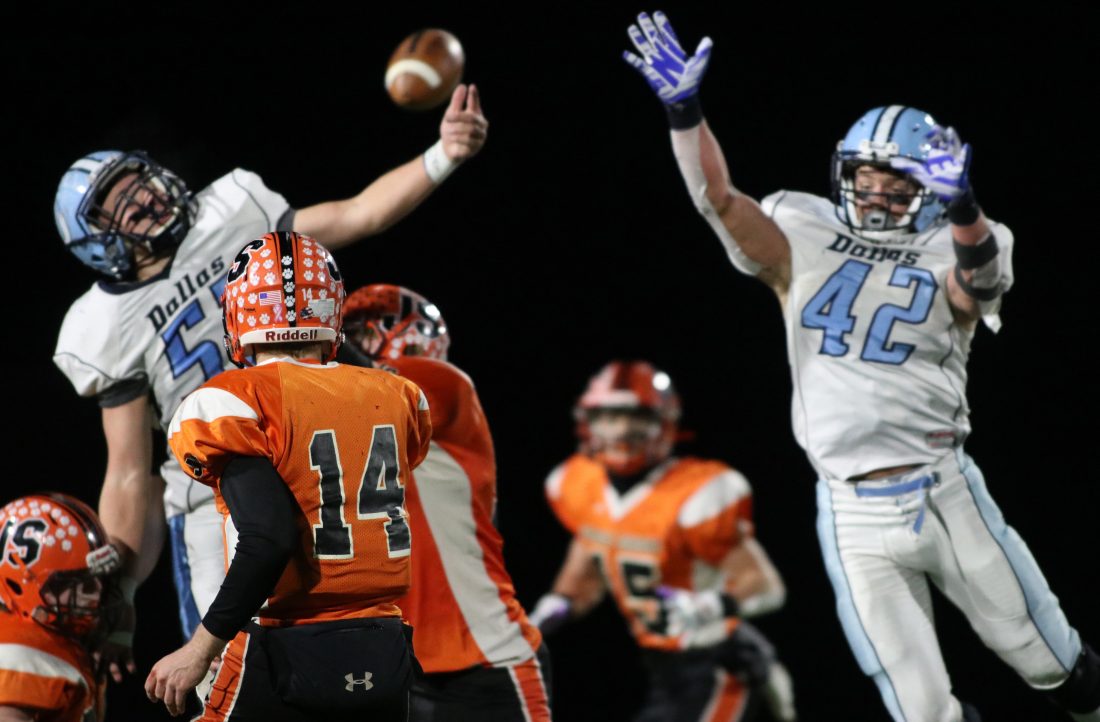 14 Shore has his pass tipped by a Dallas defender in the first half.

The Bulldogs’ Cinderella story season didn’t have a storybook ending– but it had the perfect script. Friday night, the Jersey Shore football team fell to Dallas in the PIAA Eastern final 56-28.

“Two consecutive conference championships, district championships. We played 15 games this year. We’re putting a banner in the stadium next year for the Eastern finals, they deserve to be recognized for that. No team in Jersey Shore history has made a quarterfinal,” head coach Tom Gravish said following the season-ending loss.

“Dallas is a great football team, we’re disappointed but we’re also proud of what the seniors meant to this team, all the hard work and dedication. Give credit to Dallas they’re just a fantastic team. We wish them nothing but the best and hopefully they bring home the gold for this half,” Gravish said of the team’s undefeated opponent.

Jersey Shore started out the game jumping out to an early lead on a 10-yard Josh Malicky touchdown run to cap a drive in which senior Quarterback Tanner Lorson went 5-5 passing. The Bulldogs continued to go blow-for-blow with the undefeated Dallas Mountaineers and ended the first quarter in a 14-14 tie.

Tanner Lorson was an exceptional 20-29 for 227 yards with a touchdown in the first half. The Shore wide receiving core was aggressive and fierce high pointing the ball. Hess, Schaffer, Westlin, and Anderson ended the half with at least four receptions and 45 yards each.

Lorson finished the game 36-60 with 362 yards as Jersey Shore continuously tried to battle back in the game.

To put it in perspective how stifling the Dallas defense has been this season, only two of Dallas’ regular season opponents previously eclipsed 14 points in a game. One with 14, one with 15.

The Jersey Shore offense was able to move the ball almost at will early in the game. The defense contained the monster of the 2,300 yard rusher that was Larry Kelley as much as they could until it was merely too much.

At halftime facing a 21-point deficit, no panic was visible and no doubt was evident. Jersey came out of halftime marching down the field and scored within minutes on a Lorson to Cayden Hess touchdown pass.

Coming off the thrilling 21 point comeback in triple overtime in the state quarterfinals last week, the feeling of nostalgia filled the air momentarily until Kelley pounced his way into the end zone for his fourth touchdown of the night.

Despite the final score the Bulldog defense was hard hitting and aggressive as always. Jersey Shore was able to force Dallas into lengthy 3rd downs but accurate and poised plays by quarterback Michael Starbuck created first-down conversions and time-wasting drives exhausting the Shore defense. Starbuck finished the night with 11-17-0, 174 yards and 3 TDs.

Senior Cornerback Brett Guthrie gave Shore a chance at life on a critical third down pass breakup in the third quarter but an offensive turnover began to secure the win for the Mountaineers.

“This team has been playing together since fourth grade, it’s unreal how much we love each other and how fun it’s been, I don’t think Jersey Shore has ever had a locker room like this,” Guthrie said following the game.

“I love em, it’s unreal how much support we’ve had over the entire season, they never gave up on us,” he added speaking on his coaching staff and community support.

“The younger guys know who these seniors are, they set the bar real high for expectations. They played with class,” Gravish said of the senior leadership.

Jersey Shore has lived by the motto ‘Tradition Never Graduates.” The seniors, underclassmen and coaching staff gave the community something incredible to cheer for this football season. There were highs, lows and enough excitement in last week’s thriller for a whole season. They played football and had genuine fun.

“Every day of practice was fun, it was a thrill to get there. Not that other years haven’t been, too. Every day was just a blast and their personality, this was just a special year, special time and we’re keeping that motto ‘Tradition never graduates,'” Gravish said.

Tradition didn’t graduate last season into this season, and most likely won’t heading into the 2020 season.