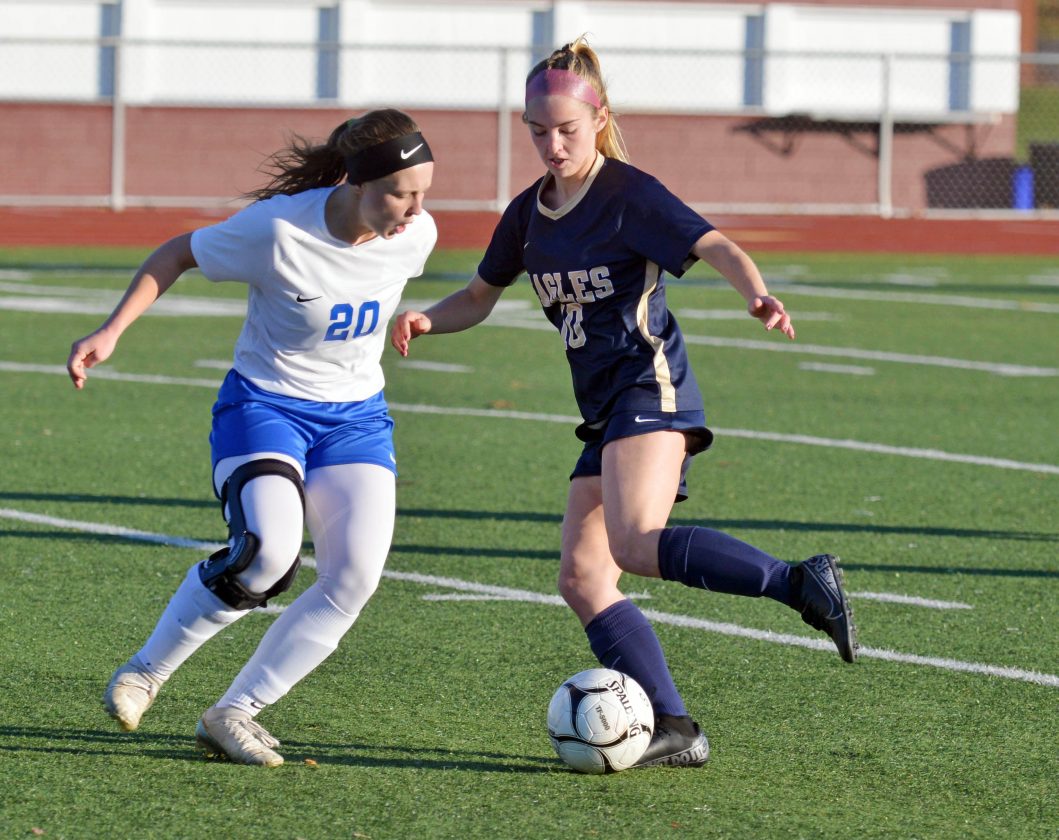 While the chances for a clean season are now out of the hands of the Bald Eagle Area girls soccer team following their 3-0 loss to No. 2 Bedford in the District 5-6 Class 2A Girls Soccer Championship Saturday at Mansion Park, coach Jared Moore is focusing on what still remains for his team following their first loss of the season.

“We’re still going to play Tuesday, we’re going to go back at it again, and see who we play,” he said. “Hopefully we can string some passes together next time.”

That first Bison score came on a breakaway from Katelyn Shaffer who deposited that one just over eight minutes into the match.

Shaffer would later bury one off the corner kick to put the game out of reach at the 15-minute mark as they went up 2-0 at the break.

“Bedford’s a good team,” Moore said. ‚“We got away from the game plan today a little bit. I don’t know if it was nerves, but don’t take anything away from them, they were excellent today and moved the ball well.”

The Eagles’ one prime scoring chance came in the 34th minute of the first half when Zoey McHenry had a breakaway but Lindsay Mowry denied the best chance for BEA to get on the board.

“It always feels good to win another district title,” Bedford coach Jeff Thomas said after winning the program’s fourth straight district title. “These girls have worked hard for it, too. Losing three key seniors last year, we had to figure out a way to replace them. There were a lot of goals scored by those three that we lost last year”

They weren’t done there as just over eight minutes into the second half Grace Sarver put the icing on the cake for the Bisons.

“They move the ball excellently down the field,” Moore said. “They were very organized and we didn’t quite find our space today. They didn’t make too many mistakes.”

Bald Eagle had two great scoring opportunities to break the shutout around the 75th minute from McHenry and Emily Shiels before they were both turned away by Mowry.

“That’s the whole plan of playing possession soccer,” Thomas said. “Less turnovers, ball on the other end unless there’s a breakaway, scoring chances for the others cut down.”

The Eagles now await the District 9 champion Brockway or Elk County Catholic on Tuesday at a site and time to be announced.