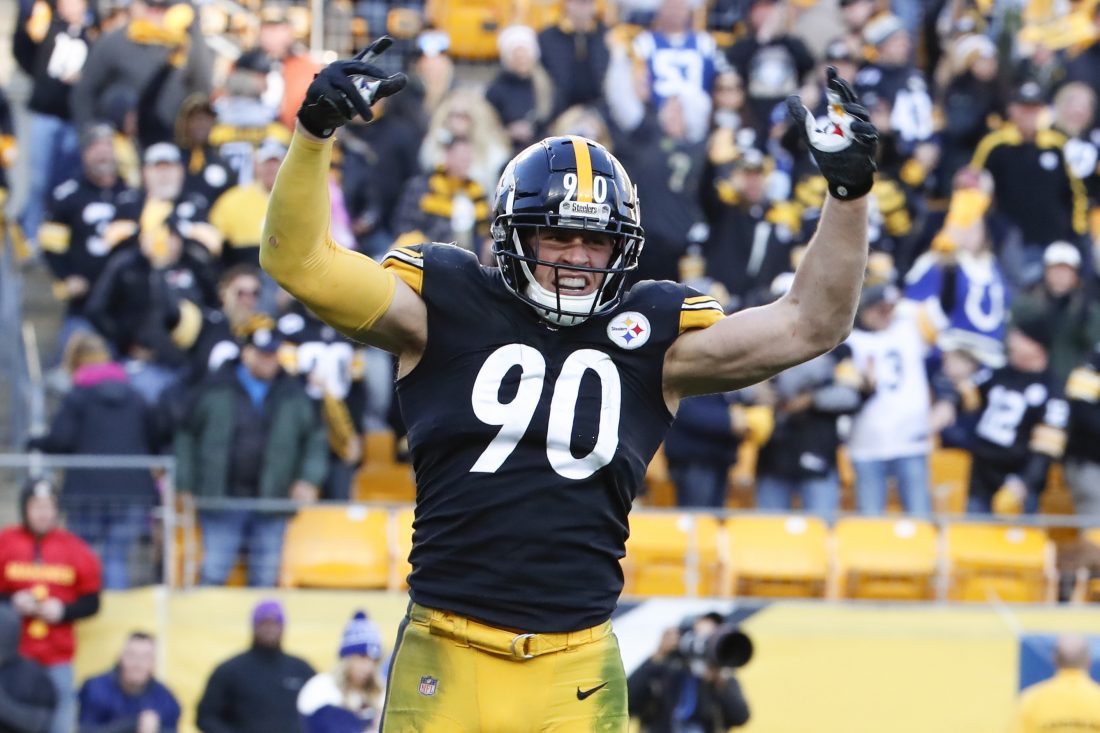 Pittsburgh Steelers outside linebacker T.J. Watt (90)m celebrates a defensive play against the Indianapolis Colts in the second half of an NFL football game, Sunday, Nov. 3, 2019, in Pittsburgh. (AP Photo/Gene J. Puskar)

PITTSBURGH — Aaron Donald is losing his edge. Kind of.

The Los Angeles Rams defensive tackle spent his team’s bye week back home in Pittsburgh working out in the facility at the University of Pittsburgh that bears his name . It was cold. Well, cold to a guy who’s spent the last few years soaking up the Southern California sunshine while becoming the NFL’s most disruptive force.

“It was a little chilly,” Donald said with a laugh. “I said: ‘LA is changing me! I’m getting a little soft!'”

The two-time NFL Defensive Player of the Year remains as dangerous as ever heading into Sunday’s homecoming at Heinz Field when the Rams (5-3) visit the Steelers (4-4). Following a slow start, Donald has sacks in three straight games, looking very much at the height of his considerable powers.

“He’s just a game wrecker,” Steelers outside linebacker T.J. Watt said. “It doesn’t matter what aspect of the game it is, he really has no weakness and that’s what makes him the best.”

And a potential matchup nightmare for Pittsburgh. The Steelers have ripped off three consecutive victories after opening 1-4, relying heavily on the defense to create turnovers while the offense searches for an identity under quarterback Mason Rudolph. Rudolph has been a solid game manager if not exactly a difference maker, thanks in part to an offensive line that’s allowed a league-low eight sacks.

“I don’t know that anybody is that guy for anybody,” Tomlin said. “I think Aaron Donald is Aaron Donald.”

And when Donald is free to be Donald, the Rams are among the NFL’s elite. Pittsburgh’s recovery from a rocky opening month that included losing Ben Roethlisberger for the season with a right elbow injury in Week 2 could be derailed quickly if it can’t find a way to keep Rudolph upright and Donald in check. Far easier planned than done.

“He is the leader of the pack,” Tomlin said. “You can take any block and highlight it and talk about who is being productive and who is not, but the reality is that guy is a catalyst for what goes on over there in terms of creating rush and putting pressure on the quarterback.”

The Rams’ thoroughly renovated secondary will get a significant test from Steelers wide receiver JuJu Smith-Schuster. Jalen Ramsey is likely to spend much of his third game with the Rams glued to Smith-Schuster, while cornerback Troy Hill and safeties Marqui Christian and rookie Taylor Rapp will have increased responsibilities again. The new secondary looked good against Atlanta and Cincinnati, but Smith-Schuster and Pittsburgh will test coordinator Wade Phillips’ increased commitment to man-to-man coverage.

No team was better at turning red-zone possessions into touchdowns last year than the Steelers. This year, not so much. Pittsburgh is 28th in the league in red-zone touchdown percentage and converted just one of four red-zone opportunities against Indianapolis last week, one of the reasons the Steelers had to white knuckle their way to a 26-24 victory . Asked why his team is struggling to score, Tomlin laughed.

“What do you think? We’re still writing our story, but you can come to whatever conclusion you want about our lack of productivity in that area,” Tomlin said. “I’m not going to take a whole lot of time outlining that.”

He shouldn’t have to. Roethlisberger is out for the year and wide receiver Antonio Brown is out of football after blowing through three teams in six months.

Todd Gurley has only 92 carries through the Rams’ first eight games. That’s down from 169 at this point last season for one of the NFL’s busiest running backs over the previous four years. Coach Sean McVay insisted again this week that he isn’t preserving Gurley’s health, instead blaming his inactivity on situational problems, including falling behind in games. Gurley’s running was the reason McVay’s play-action passing game worked so well for the past two years, but every week is a new opportunity to use Gurley — and he is rested and ready.

Donald doesn’t have the market cornered on getting to the quarterback. The Steelers are fifth in the league in sacks (29), led by Watt and fellow outside linebacker Bud Dupree, who have combined for 13¢ sacks through eight games, making it difficult for opponents to pick which one to throw an extra body at on a given play.

“That’s the awesome thing about having a guy on the other side who is so effective because they can’t just chip one of us because the other side is going to be free,” Watt said. “So hopefully we can keep drawing the attention that we’re drawing and keep producing like we are.”