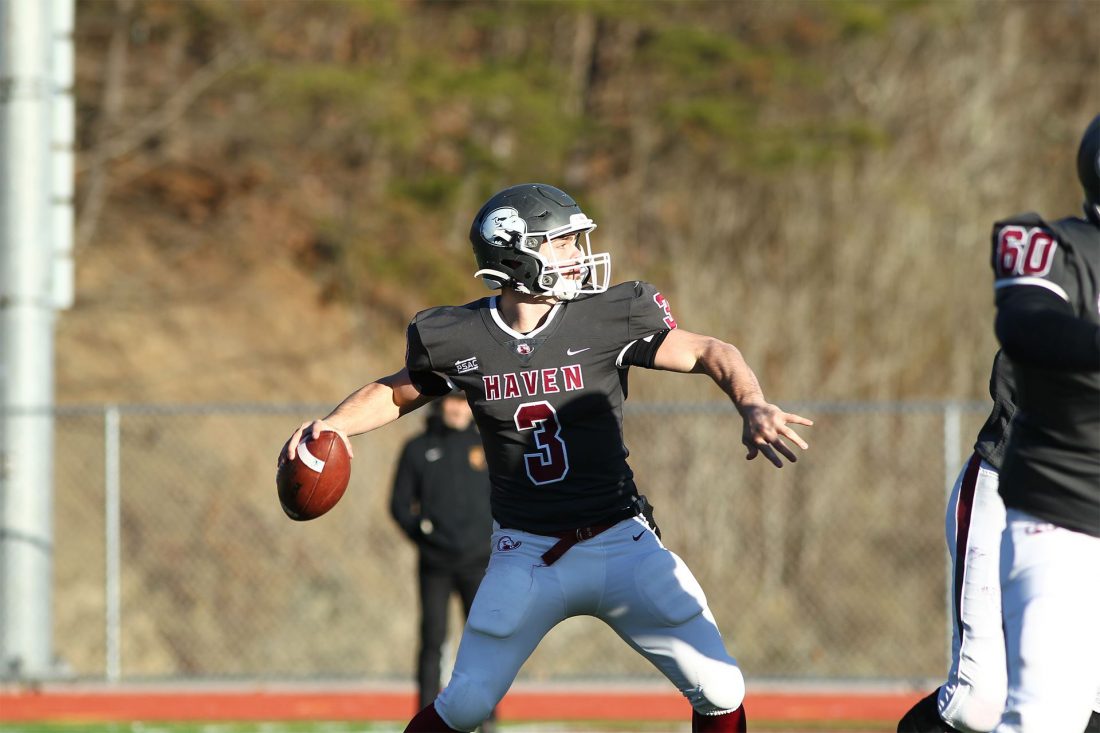 It certainly wasn’t pretty, but Lock Haven University football topped Gannon 28-27 at home Saturday. The win snapped a nine-game losing streak and bookends the 2019 campaign with a victory.

LHU now holds a final record of 2-9 for the third consecutive year. Gannon also ends with that mark, after losing its last seven games of the campaign.

“You can’t control all the events that happen,” Lock Haven coach Dave Taynor said. “But you can control how you respond. That’s what we teach to these guys every single day. And you started to see some of that resiliency. You saw it out of a group of young freshmen out there that started to learn to play college football.”

The Bald Eagles held firm control of this contest throughout much of the first half. Despite a fumble on the opening possession of the game, Lock Haven took a 13-0 lead after the first quarter.

The especially-young LHU defense made some real strides to conclude the season. Coming into the Saturday allowing over 51 points per game, the Bald Eagles were able to keep the opposition out of the end zone on the opening drive. That was the first and only time this feat occurred in 2019.

The Bald Eagles and Golden Knights exchanged counterpunches throughout the second quarter. Gannon was forced to play redshirt-senior wide receiver Joey Cox at quarterback, as the road team had no healthy true signal-callers for the season finale.

Cox threw a 16-yard touchdown pass at the start of the quarter, then ran one in with eight seconds remaining in the half. In between that, LHU executed on a 15-yard touchdown run from junior tailback Chantz Swartz. The score was 20-14 Lock Haven at the halfway point, as the Bald Eagles missed an extra point after the opening touchdown.

LHU compiled 299 yards of offense in the first half. It was done with a 151 to 148 split of passing yards and rushing yards. But things started to slow down for the home team in the second half.

The third quarter resulted in zero points. A major reason why that was the case, is that Lock Haven executed a goal-line stand midway through the quarter. Gannon had 1st and goal at the three yard line. The Golden Knights ran it four straight times with senior running back Zevin Holley, and he was kept out of the end zone.

After neither squad scored in the third quarter, Gannon took its first lead of the game with 12:26 to go on another Cox rushing score. Gannon’s converted point after made the score 21-20.

Knight’s play throughout the afternoon drew high praise from Taynor. And it was needed to give his team a chance at a comeback victory.

“Kyle Knight is a special player,” Taynor said. “And it’s not just from an ability standpoint. The thing that makes him special is he is a tough kid. He returned from an ACL injury and battled back. He got a concussion earlier in the season and battled back. There’s zero fear in the way he plays.”

Late in the final quarter, Knight orchestrated a six play-80 yard drive to give his team the lead. He finished the series with a 31-yard touchdown run, then threw a successful two-point conversion to sophomore wideout Christian Drayton III. That made the score 28-21 in favor of LHU with 3:57 to go, but the madness had only begun.

Cox led a drive that took almost the remainder of the game all the way downfield. Gannon converted on three third downs and let the clock bleed to get down to the LHU eight yard line with 11 seconds remaining. Cox then seemingly threw an interception that LHU sophomore linebacker Shane Scott picked off and returned for a touchdown. But the officials flagged fellow linebacker Alex Welch for targeting on the play.

“You get an interception returned for six and the game’s over,” Taynor said. “I saw the penalty flag get thrown and honestly I was trying to scream from the sideline to just run around. Try to run around for another 11 seconds without getting tackled versus getting in the end zone and trying to burn the clock. It was a bang-bang play there and I felt bad that (Alex) Welch got a targeting call in his last game, but I absolutely love the kid.”

Welch, who finished the game with a career-high 16 tackles, was ejected for that infraction. He then hopped over the fence to watch the final seconds of the game play out from the outside of the track at Hubert Jack Stadium, as he needed to leave the field of play.

Cox ran in a one-yard touchdown with two seconds remaining to put the score at 28-27. First Gannon took a timeout after lining up for a point after. Then head coach Brad Rzyczycki tried to bluff by lining up for an extra point again, then starting to shift the formation to go for two. But Taynor sensed this and called for time. Now the end of the game situation was clear- Gannon was going for the win.

On the conversion attempt, LHU got heavy pressure on Cox, then forced an incompletion in the corner of the end zone to all but secure victory.

“Defensively to see us win a game where we made a goal line stand, and made a stop here at the end,” Taynor said. “Those things are very important.”

Lock Haven finished with 440 yards of offense, and ended the 2019 regular season as the Pennsylvania State Athletic Conference (PSAC) leader in rushing yards per game. Swartz finished the game with 15 rushes for 125 yards. This was Swartz’ fourth 100 yard rushing game of the year. He finishes the season with 926 yards in nine games played, good for the second most rushing yards per game in the PSAC.

Knight had the most efficient passing day of his career. He completed 81% of his passes for 242 yards and two touchdowns. He also ran 12 times for 56 yards and that game-winning touchdown.

Junior wideout Bryan Greene tallied 104 yards on six grabs. He had the longest play from scrimmage on the day, catching a 49-yard pass from Knight. Lantz had a nice day, as he had four receptions for 69 yards and what was his first career touchdown.

While Scott didn’t get statistical credit for that pick-six, he did have a career-best 14 tackles. Fellow sophomore Austin Barber had an interception in the first quarter. Freshman defensive back Levi Engle did the same on the opening drive of the third quarter for Gannon. That was Engle’s fifth interception of the year, tying him for second place in the PSAC in that statistic.

The Bald Eagles now head into the offseason with some positive mojo after knocking of Gannon for the second straight year. In 2018 LHU won a thriller 50-48 in Erie in the midst of a snowstorm. Now the hope is that Lock Haven can progress from what it did at the end of the season, instead of once again treading water.