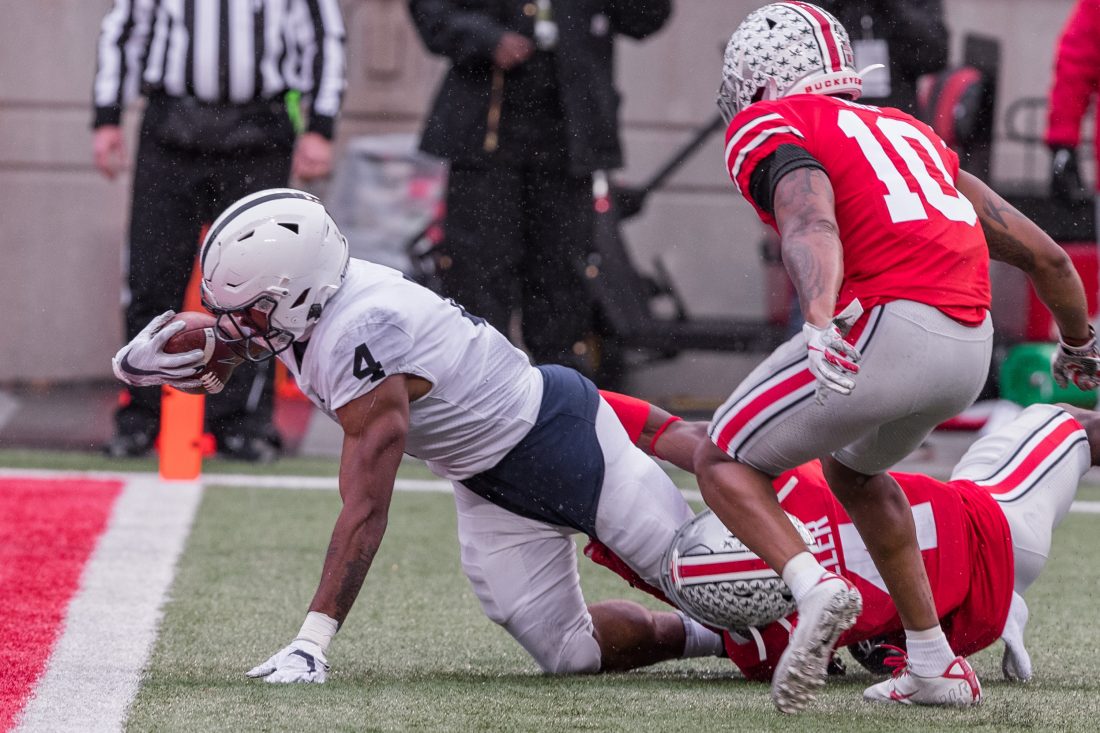 COLUMBUS, Ohio — Penn State left its heart on the Ohio Stadium turf Saturday, gamely fighting back from a three-touchdown deficit, and at the heart of that fight was its backup quarterback.

Will Levis was outstanding.

In fact, it’s difficult to remember a Penn State quarterback coming off the bench in a more hostile environment and doing more to put the underdog Nittany Lions in position to beat one of the nation’s best teams than what Levis did here.

The 6-foot-4 redshirt freshman entered after an injury to starter Sean Clifford with the Lions down 21-0 early in the third quarter.

“It was cool to be on that stage for the first time, to feel the momentum shift,” Levis said. “But we didn’t get the job done.”

His statistics were not gaudy. He completed six of 11 for 57 yards and rushed 19 times for 61.

But what stood out were his toughness and his leadership.

He was central to three scoring drives that pulled the Lions within 21-17 before the Buckeyes knew what hit them.

On his first series, Levis bulled for 10 yards on third-and-4, setting up a pair of Journey Brown runs of 9 and 18 yards, that got the Lions on the board.

Ohio State, which had already fumbled into the end zone while on the verge of going up 14-0, then shifted into gracious host mode, as Micah Parsons caused J.K. Dobbins to fumble, and Lamont Wade recovered at the Buckeye 12.

Down 21-14, the Lions took gained possession on yet another OSU fumble at the Buckeyes’ 35, and Levis rushed three more times for 24 yards before hitting Brown with a perfect slant/would-be touchdown that was dropped.

Penn State settled for a field goal, cutting the lead to 21-17 before Levis’ first empty possession was followed by the Lion defense surrendering its second touchdown pass, despite double coverage.

Levis then had the Lions on the move again, hitting KJ Hamler for 22 yards and rushing himself for 16 yards on three carries, putting the Lions at the Ohio State 27 with 10 minutes to play.

“When we got Will involved, obviously it opened up another aspect of our offense,” James Franklin said. “He’s a big, physical runner and he was able to push the pile and finished some runs. And we were able to battle back.”

But then Levis’ inexperience inevitably bit back. The play call came in as an RPO (run-pass option), and Levis thought he had Freiermuth over the middle. He threw into a crowd, and J. Hilliard intercepted, effectively ending the Lions’ upset hopes.

Instead of getting at least a field goal to maintain striking distance, Penn State was left to second-guess itself.

“Obviously, we don’t want to force the ball down there, especially when you’re in scoring territory,” Franklin said. “But we didn’t do that. We forced the ball to the tight end, and it got intercepted. We’re trying to manage how we’re calling the game and play to his strengths, but we obviously had to mix some passes.”

Levis, whose late running when called upon in the fourth quarter helped clinch last week’s win over Indiana, took responsibility for the interception.

“That’s completely on me,” he said. “We were reading the play, and I didn’t see the whole picture. I thought I made the correct read, but I made an errant throw. I should have eaten it and run the ball.”

The air let out of the Lions’ comeback, Ohio State’s fans smelled victory and turned up the volume. That contributed to a pair of false start penalties and communication issues on Penn State’s last two possessions.

“The crowd noise at the end of the game … Will playing his first significant time, in this stadium, the offensive line could not hear him,” Franklin said. “That was an issue.”

“I have to work on my cadence,” Levis said.

“Will did great,” guard Mike Miranda said. “It was great for him to come in and immediately give us that boost. All of us are extremely proud of the way he played.”

Franklin said afterward Clifford could have returned, but he also said Clifford “has not been 100 percent.”

With Rutgers up next, there’s a strong chance Levis will see more time, if not start, the regular season-finale.

He said his mindset will not change, something he learned from Trace McSorley.

“It doesn’t matter if you’re fifth string or first string, you approach it as the starter,” he said. “The earlier you have that mentality, the better.”

Levis concluded Saturday’s experience “will make me a much better player and person and help me for my future.”

The backup quarterback is usually the most popular player on campus. This is not to start or suggest a controversy, but there’s no question the Lions’ quarterback position is stronger today than it was last week.