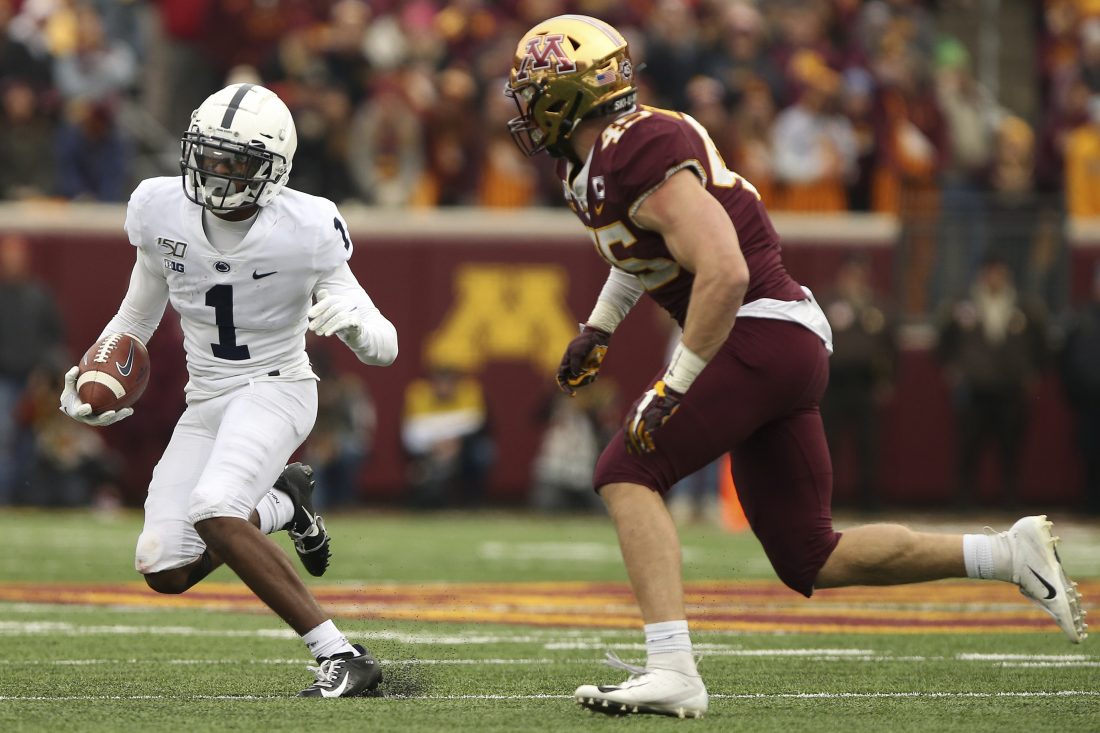 MINNEAPOLIS — There were numerous instances of questionable playcalling Saturday by offensive coordinator Ricky Rahne, particularly in the red zone with conservative runs and low-percentage fade passes.

The Nittany Lions did score 26 points, and the players themselves deserve criticism for dropping passes or failing to execute in certain spots. Still, Penn State’s offense had plenty of opportunities but went just 4-of-6 in the red zone with only two touchdowns.

Quarterback Sean Clifford and tight end Pat Freiermuth both spoke out in defense of Rahne.

“We just weren’t executing,” Freiermuth said. “I think Coach Rahne did call good plays down there (in the red zone). That’s not on him at all.

“I know the media is giving him a hard time, but Coach Rahne is the best offensive coordinator in the country, and I stand by that. That’s my coach, I love him. He calls the right plays, and we don’t execute it. So anyone bashing Coach Rahne, I think they’re wrong.”

Clifford said much of the same.

“I don’t really know what people are saying, but at the same time, there’s not one time during that game where I didn’t think Coach Rahne had full control. I had no problem with anything he did. It’s on me.”

Clifford had a tough day throwing the ball and put the blame on himself.

“It’s one of those things where you can’t help but blame yourself, especially after my performance today,” the quarterback said. “I think that I could have played a lot better. I say that each week, but this week it actually hurt us.”

Why spike the ball?

Penn State got a first down at the Minnesota 7 with about 20 seconds left in the first half. The Lions had only one timeout left. Instead of calling that timeout and giving themselves three chances to throw the ball in the end zone from the 7, the call was for Clifford to spike the ball on first down. That left PSU with only two plays to score a touchdown, and it could not, settling for a field goal.

Franklin admitted afterward that he should have called timeout. Here was Clifford’s explanation:

“Coach Rahne wanted to save clock, Coach Franklin wanted to save clock. So I was in agreement with them. I got the call from the sidelines. … I’m backing them no matter what. They saw that we should save clock and trusted that we’d get in with the next two plays. Obviously I didn’t execute to the standard.”

Noah Cain was on the trip but did not play. He suffered a leg injury early against Michigan State two weeks ago and missed the rest of that game.

There wasn’t much of a tailback rotation during the game. Journey Brown got the start and was on the field most of the day. He ran for 124 yards on 14 carries, including a 45-yard TD. Ricky Slade got no carries, and Devyn Ford carried three times for 9 yards.

Clifford went down with what looked like it could have been a serious leg injury late in the game on a short touchdown run by Brown. But it turned out just to be a cramp, and the quarterback was back on the field for PSU’s final series with a chance to win.

Franklin said Clifford’s right calf was “rock hard” and that he couldn’t move very well on that last series.

Freiermuth did what he could to pick up his quarterback after the loss.

“I told Sean I love him,” Freiermuth said. “There’s not another dude in the whole country, in the whole world I would want as my quarterback. Thats’ my brother, I stand with him good and bad.

“He did make plays to put us in position to win. I think the whole offense just needs to capitalize more in the red zone. That’s unacceptable how we went in the red zone that many times and didn’t score.”