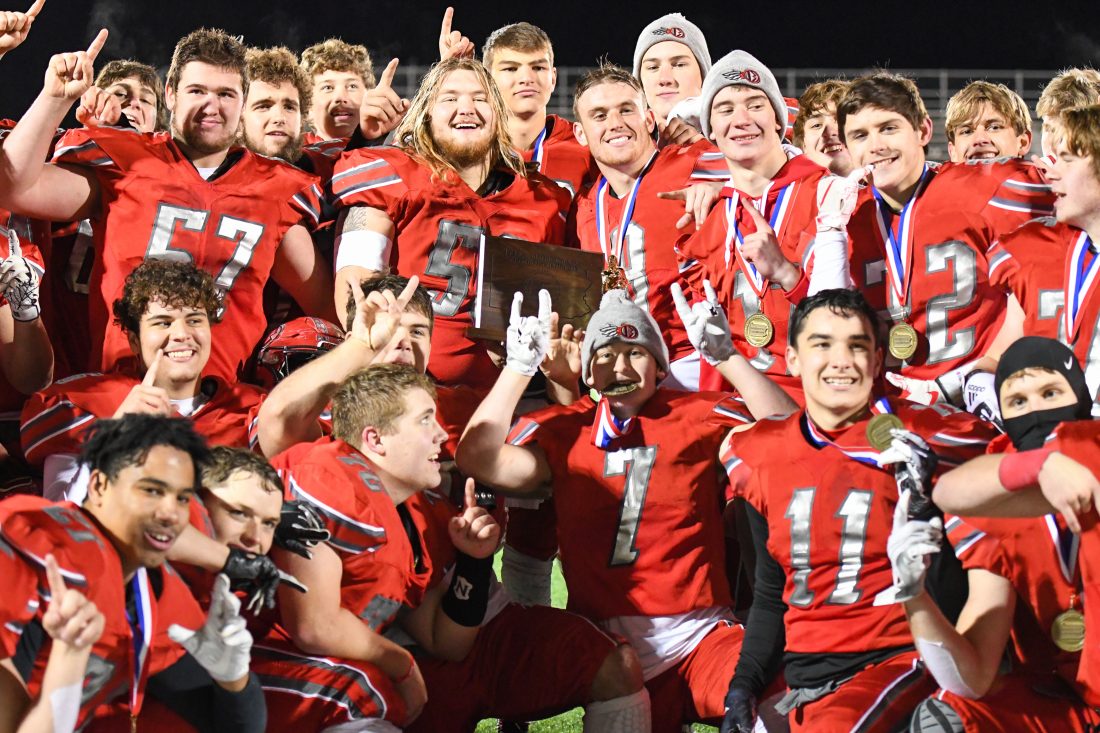 WINGATE – Two teams, one goal, but Both came in with extreme differences in offense.

As two familiar rivals lined up to battle for the District 6 Class AAAA title game Friday, featuring Bellefonte and Clearfield.

The Red Raiders went with their strong offensive line and strong running game while the Bison took it through the air.

Bellefonte’s offensive weapon, CJ Funk, led his team to the 35-21 victory Friday night with an 187-yard effort in the Raiders’ championship victory.

Combined, the running game had its way with the Clearfield defense as they rushed for 352 yards.

Defensively, the Red Raiders allowed 117 yards through the air and only 48 on the ground.

“In the second half I thought we put ourselves in a good position to play good defense,” said Bellefonte coach Shanon Manning. “To be honest with you, not playing football two of the last weeks was pretty hard. There was a lot of rust and you can’t mimic playing football. You just can’t.”

Bellefonte did score on offense early and took it to the heart of the Clearfield defense.

On their first possession, the Red Raiders marched down the field with ease and culminated the drive with a Nick Capparelle 17-yard run and a Dan Persiko kick to make it a 7-0 game.

Clearfield was forced to punt the ball on its first possession and gave the ball back to Bellefonte.

“The Red and Black attack” went back to its ground game and scored once again, this time quarterback Ethan Rossman called his own number and scored on a 32-yard run, upping it to 14-0.

On Clearfield’s next possession, the Bison took the ball all the way to the Red Raiders’ 1 before the Bellefonte defense held and got the ball back to its offense.

But the Bison would work its way back into the game scoring twice after a Jalen Emel touchdown put the Red Raiders up 21-0.

Two consecutive touchdowns by Brett Zattoni, a 1-yard run at 4:34 and Oliver Billotte 1-yard touchdown run , sent the Bison into the intermission with a renewed hope, trailing 21-14.

In the third quarter, the Bison knotted things at 21 on a Billotte to Nick Domico 14-yard touchdown pass at 3:45 left in the period.

But the sign of a true champion is how you handle adversity.

Funk crushed his way into the end zone on a 16-yard run at 10:45 to take back the lead and then Rossman sealed the deal with an 11-yard touchdown run at 4:34.

Bellefonte iced the game when Jalen Emel intercepted the Bison on the last drive to let the cheers and the District celebration begin, 35-21.