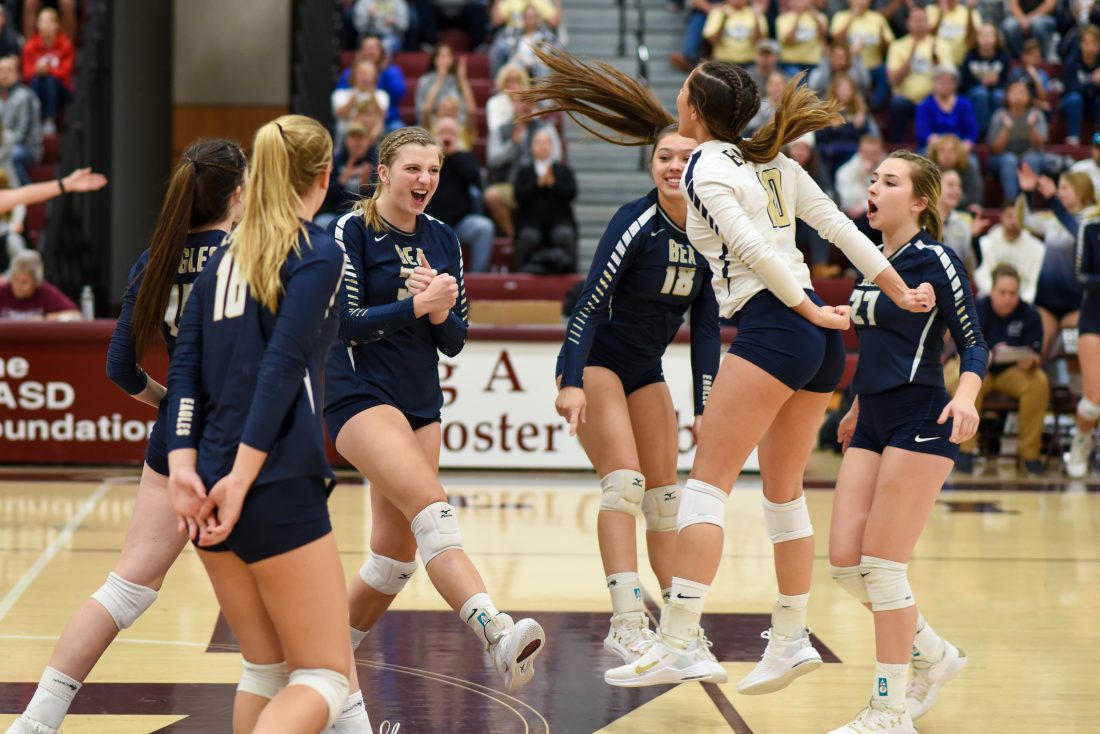 (TIM WEIGHT/FOR THE EXPRESS) Bald Eagle Area celebrates during Saturday’s District Championship game versus Central Cambria. The Eagles crawled out of an 0-2 hole to win its third straight district crown, 3-2.

ALTOONA – Never question the heart of a champion.

With their backs against the wall, facing a 2-0 deficit to Central Cambria in the District 6 Class AA Championship game, the Bald Eagle Area girls volleyball team never wavered and went right to business as it forced the Red Devils to a fifth and deciding game, dominating the third and fourth games, 25-17 and 25-9.

It would be Madison Eckley’s time to shine as she was sizzling on the service line with nine service points in a row, putting the third game out of reach and helped the Eagles clinch a third District 6 title in a row.

Central Cambria started off the first two sets taking close 27-25 and 25-23 wins before the Eagles’ comeback.

“Having our backs against the wall, we kind of talked about the biggest thing for us is that we’re not very good when we think. I know it sounds funny but we talked about a life lesson,” said Bald Eagle coach Larry Campbell said. “I told them ‘Hey guys, this isn’t who we are. We are fun, we’re goofy. Just come out and play for each other. Just have a blast and you’re out here worrying about everything else. I said why don’t we just go out and settle down and be who we are’.”

Trailing 2-0, the team took that message and carried it through to the end.

After hearing the chants from the Red Devils’ student section, the group proved to wake up the sleeping giant and Eagles showed them that the game was far from over.

Game No. 3 proved to be the dawn of a new mindset for the Eagles and it showed on the court.

After an early 1-1 tie, Bald Eagle and Central Cambria traded three side outs before giving the ball to Grace Hugar to serve.

With the help of a Lacee Barnhart blast and a Madison Rockey hit up front, the Eagles moved out to a 5-2 advantage.

After another exchange of side outs, Bald Eagle extended its lead to 7-3 on a service point by Lexi Skripek.

With the momentum, the Eagles built up a comfortable 6-point lead at 12-6.

But the Red Devils battled back in the contest, tying it at 14.

But the Eagles were not going to be denied in this game as it went on a 6-0 run thank to Rockey’s sets and a very strong front line play.

After that it was all the momentum the Eagles would need, as it went on a 5-3 run to end the game.

In the fourth set, the Eagles made its mark early, thanks to the serving of Eckley.

Eckley led off the game with five consecutive service points, from there the Eagles continued to pound the ball right at the heart of the Central Cambria defense.

Not only did they get the win to force a fifth and final game but kept the Red Devils in single digits, 25-9.

Leading the comeback for the Eagles was Madison Rockey’s 59 assists and four blocks, Skripek finished with 36 digs, Grace Hugar with 18 kills and Katelyn Smitchko with 12 kills.

The Eagles will be back in action Tuesday night at Bellefonte high school for a 6 p.m. clash against Avonworth.