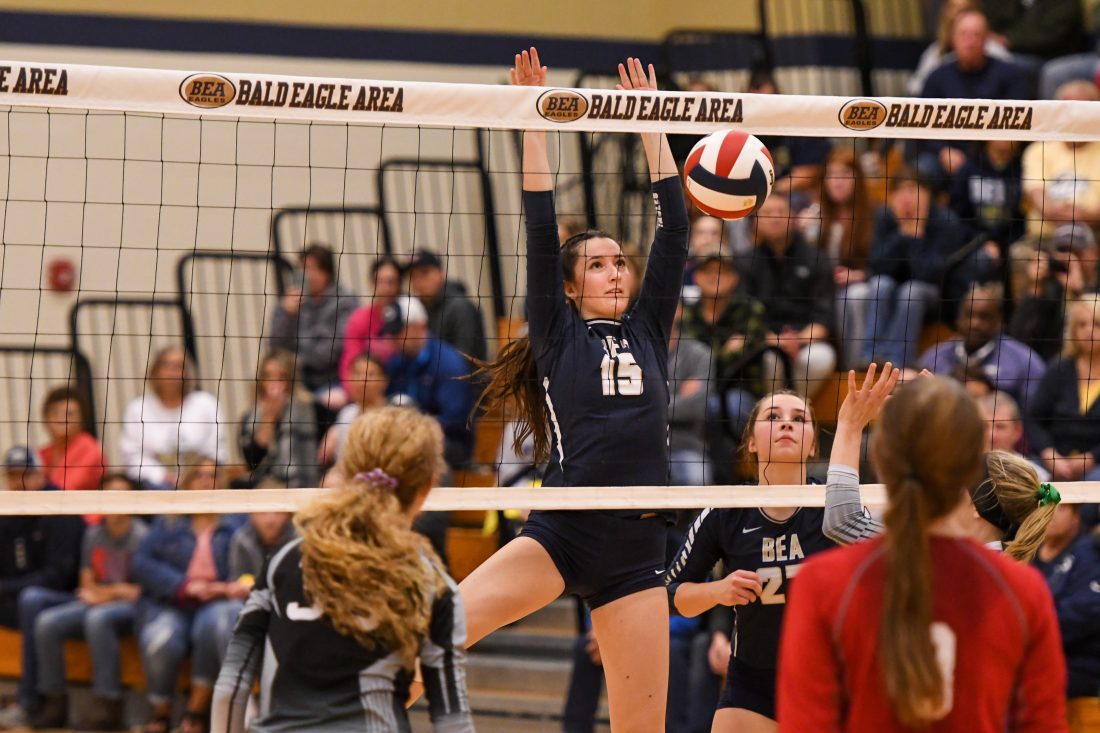 WINGATE – The Eagles are championship bound.

You can tell a lot about a team when it is faced with adversity.

Thursday night in two separate sets, the Bald Eagle girls volleyball team had a flare for the dramatic as they defeated a determined group from West Shamokin, 3-0.

“When we play clean we are pretty tough. There were some good things and some bad things tonight,” said Bald Eagle coach Larry Campbell. “We’ll look at the film and come in here and get to work tomorrow and we’ll find out what happened between Tyrone and Central Cambria. With this group it’s nice because they’ve played so much together, we’ve been in so many big games that they don’t lose their focus. I thought we did a great job in that third game as well.”

Leading the way for Bald Eagle were kill leaders Grace Hugar and Taylor Kilmer who both finished with nine.

Madison Rockey shined the brightest for the Eagles with 15 digs and 31 assists.

Rounding things out for Bald Eagle are Katelyn Smitchko with three blocks and Elita Brown with three aces.

After an impressive opening first round contest against Forest Hills, the Eagles came out strong in its first set against the Wolves.

After taking the first set in convincing fashion 25-13, the Eagles found themselves in some tough territory in when West Shamokin came out with a strong early session, taking a very commanding 15-9 lead.

But the Eagles were about to embark on its first comeback, fueled by a combined effort by its starters.

After calling a timeout, it was time for Bald Eagle to make its move.

After exchanging side outs, making it 16-10, the Eagles picked up a side out after forcing the Wolves to return their volley wide.

Lexi Skripek started things as she posted a service point to pull within four.

West battled back and upped its lead back to six.

Again, the Eagles would take back the service and also added a service point by Brown.

With an exchange of side outs once again, the Eagles cut the deficit even closer on a Lacee Barnhart shot down the line followed by a West Shamokin long return after a Barnhart serve.

After picking up another side out, Bald Eagle tied the contest at 20.

The Wolves rallied to get the ball back on a service point then lost it on the next serve, giving the ball to Rockey on the service line. She was up for the pressure as her and her teammates reaped off four consecutive points from the line to take the contest, 25-21.

In the final game, the Wolves built up a 15-9 advantage thanks to four service points from Carissa Warr.

On their next possession, the Eagles roared back scoring six consecutive service points by Madison Eckley, putting her team up 16-15.

Much like the second game, West Shamokin rallied back to take a convincing 22-17 advantage.

The Wolves looked like they had the set wrapped up as the contest rolled to a 23-18 advantage.

With no hesitation, the Eagles went right back to work, thriving under pressure.

After getting the ball on the side out, Skripek, with the help of clutch plays by Barnhart, and some big Shamokin miscues, allowed the Eagles to complete the comeback and take the game 26-24.

Bald Eagle Area will play for the District 6 championship Saturday at 1 p.m. in Altoona against the winner of the Central Cambria/Tyrone contest.