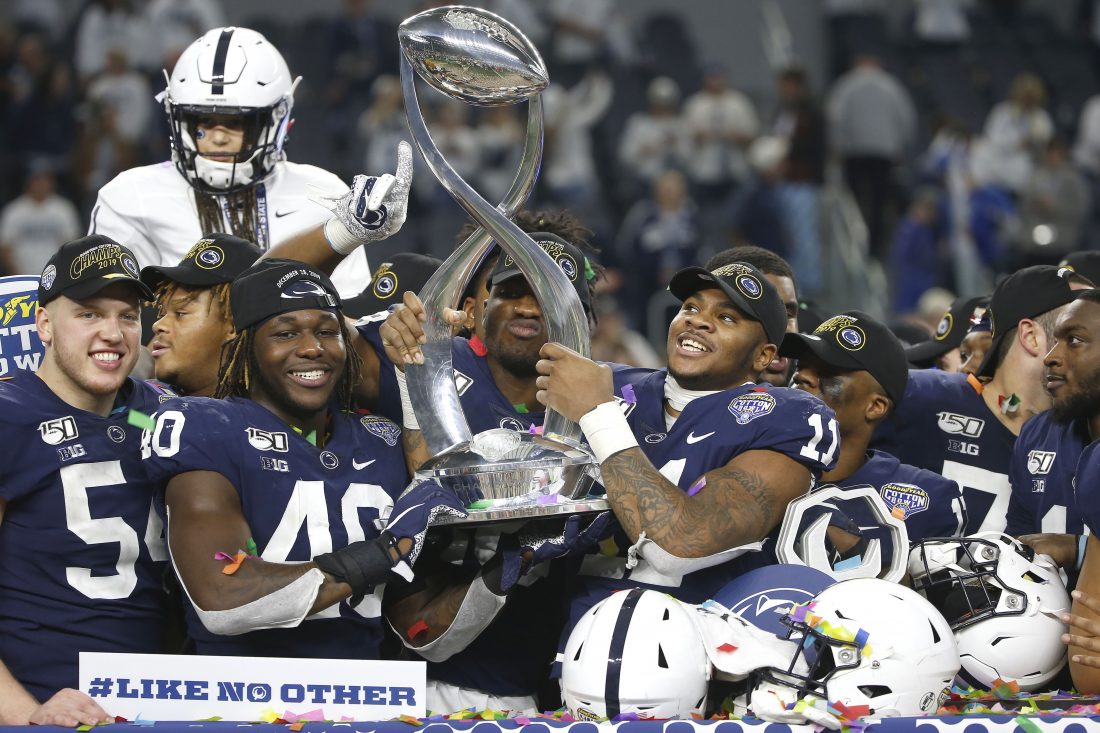 DALLAS — Penn State found a way to get a memorable win and some major positives out of what some people thought was a no-win situation playing Memphis in the Cotton Bowl.

The Nittany Lions, from the Power Five Big Ten Conference, were supposed to beat the Tigers, from the Group of Five American Athletic Conference. A victory, the theory went for many, wouldn’t really do much for Penn State.

But a loss? Oh, that certainly would have been a bad look for PSU against this caliber of opponent.

The Lions were in some trouble in the fourth quarter, but they closed strong to finish off a 53-39 victory over resilient Memphis in an entertaining game at AT&T Stadium, home of the NFL’s Dallas Cowboys.

“I’m just proud of our guys,” Penn State coach James Franklin said. “I’m proud of the program that we have built.”

Penn State won in record-setting fashion Saturday afternoon, combining with Memphis to score 92 points for the highest-scoring Cotton Bowl ever.

Running back Journey Brown rushed 16 times for 202 yards, the most ever by a PSU player in any of the program’s 50 bowl games.

Linebacker Micah Parsons, a consensus first-team All-American, turned in one of the greatest defensive performances ever by a Penn State player in a bowl game. He had 14 tackles (seven solo), three tackles for loss, two sacks, forced two fumbles and broke up two passes.

Parsons, one of college football’s most charismatic speakers, said he predicted success for himself and Brown.

“I swear, Thursday … I was like, ‘Journey, we’re going to take this MVP,'” Parsons said.

Sure enough, Parsons won the game’s defensive MVP honor, while Brown was the offensive MVP.

The Lions finished the season 11-2, played in their third New Year’s Six bowl game in four years and won their second such bowl game.

The team will have most of its starters back next season and is poised to be ranked in the top 10 – maybe even the top five – to start the 2020 campaign.

Penn State hasn’t won a national championship since 1986, but the program has been right there on the cusp of competing for College Football Playoff berths the past few years.

“But it will never come at the expense of doing all the other things right, which makes it that much more difficult. There’s no shortcuts. It’s being great in the classroom. It’s being great in the community. It’s treating people how you would want to be treated. And then it’s also getting on the football field and competing in New Year’s Six bowl games against the very best competition and talent in the country.”