Tanner Lorson named PA’s Class 4A Player of the Year 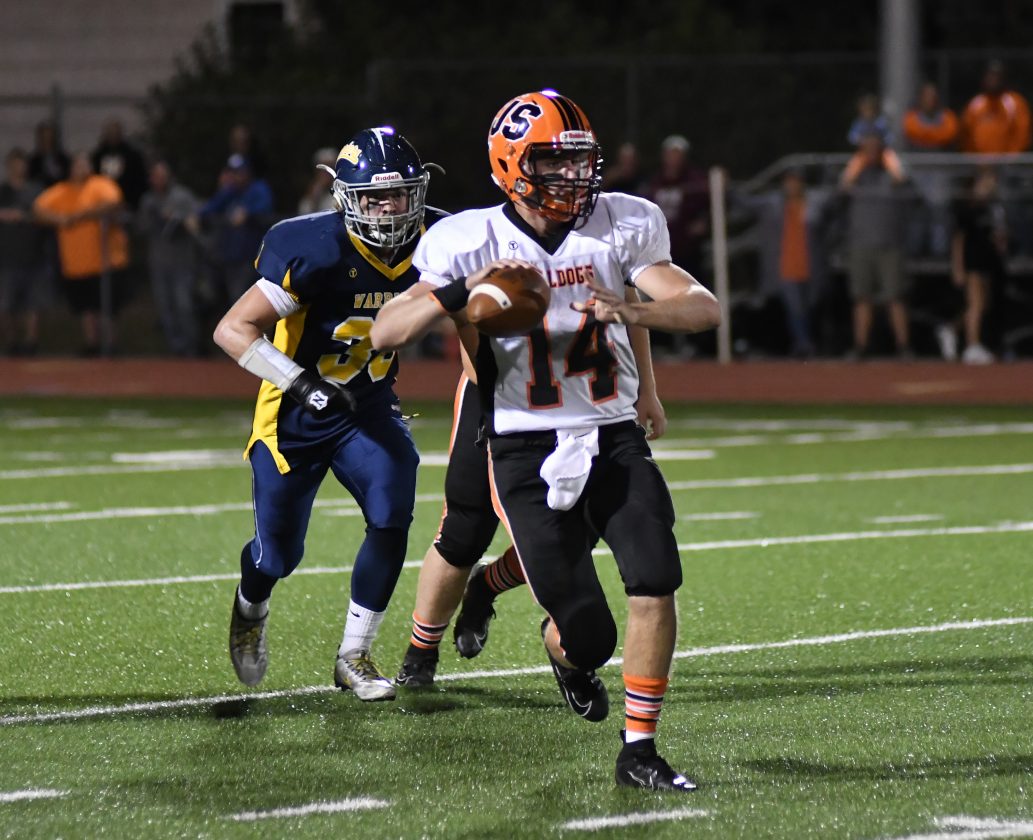 (SUN GAZETTE PHOTO) Jersey Shore's Tanner Lorson looks downfield to throw while evading pressure from Montoursville during a game this season. Lorson was named the Pennsylvania Class AAAA Player of the Year.

Tanner Lorson kept producing numbers usually only seen while playing video games. The Jersey Shore quarterback broke records and shined brightest when it mattered most, but Lorson never took the glory awarded him. Praise sent his way was directed back toward his teammates and coaches.

It is not surprising then that when given the highest honor a high school player can receive Lorson remained the same selfless person. Lorson is perched atop the mountain, Pennsylvania’s best Class AAAA high school football player. But this is an honor he shares with his Jersey Shore family and it seems fitting that Lorson will be joined on the all-state team by three Bulldog teammates.

Lorson was named Pennsylvania’s Class AAAA Player of the Year on Saturday. He and Jersey Shore teammates Stanton Westlin, Cayden Hess and Dawson Sechrist earned spots on the Pennsylvania Sports Writer’s all-state team, capping a historic season that culminated with a trip to the state semifinals. Yesterday truly was a great day to be a Bulldog.

“It means everything. Seeing all the hard work pay off, whether it be in the weight room or on the field is just incredible,” Lorson said. “I can’t thank my coaches and teammates enough for getting me to this point and allowing me this opportunity. This is a very special moment for my team and this program.”

“Tanner had one of the best seasons as a quarterback that I have ever been involved with,” Jersey Shore coach Tom Gravish said. “He would be the first to say he could not have achieved anything without his offensive line, running backs and receivers. He has a team first approach as a quarterback and captain.”

Lorson helped set a determined tone for the entire team throughout the offseason and built off a breakthrough junior campaign in which he threw for 1,707 yards. A big season seemed possible, but what Lorson did went beyond big. He put together a season like no other District 4 quarterback ever has and maybe ever will. In addition to becoming just the second player in district history to reach 3,000 passing yards, Lorson also ran for 1,183 yards and 23 touchdowns.

Operating one of the quickest no-huddle offenses in the state, Lorson kept defenses reeling, throwing for 3,505 yards and 34 touchdowns and producing a district quarterback record 4,687 yards and 57 touchdowns. Lorson played some of his best games during the playoffs and helped Jersey Shore repeat as league and champions for the first time in program history, win 11 games and reach the state’s Final Four for the first time.

Fans saw the finished product each Friday night, but what allowed Lorson to reach such lofty heights was a relentless work ethic. He was a regular at the George Curry Quarterback Camp, attended several 7 on 7 camps and made the Jersey Shore defense better by attacking it as the scout team quarterback the past three seasons. The senior emptied the barrel in a quest to help his team excel and will leave quite a legacy behind.

“I can’t tell you how proud I am of what he has accomplished this season. Tanner exemplifies everything we want in a player,” Gravish said. “He has been a champion in the class room, community and on the football field. He was a leader for his teammates each day.”

So were Westlin, Hess and Sechrist.

“We are very proud of what each of our guys accomplished,” Gravish said. “They have a great work ethic and love competition.”

Westlin and Hess formed one of the state’s most dynamic receiving tandems and each broke program single-season records. Westlin was an outstanding deep threat who caught 59 passes for a program-record 1,169 yards and 12 touchdowns. He averaged 19.8 yards per catch, went over 100 yards four times and caught the game-tying touchdown that forced the first of three overtimes in an epic 42-35 state quarterfinal win against Pottsville.

What Lorson was to the Jersey Shore offense, Sechrist was to the defense. Mirroring Lorson in terms of leadership and production, Sechrist broke a program record by making 191 tackles, including 125 solos. Sechrist made big plays at the most opportune times and his text-book stop on a 3rd-and-1 late in the fourth quarter against Pottsville gave Jersey Shore the shot at completing its 21-point comeback. Sechrist averaged 12.7 tackles per game, collected six sacks and made 18 tackles for loss. He closed his career with one last fantastic performance, making 20 tackles against Dallas.

“Dawson had an incredible year at linebacker. He was our defensive leader,” Gravish said. “Stanton had 1,000-plus yards and is a tough matchup for anyone to defend. Cayden had a great sophomore season catching 75 passes and several clutch catches throughout the playoffs.

“They are all Bulldog tough.”