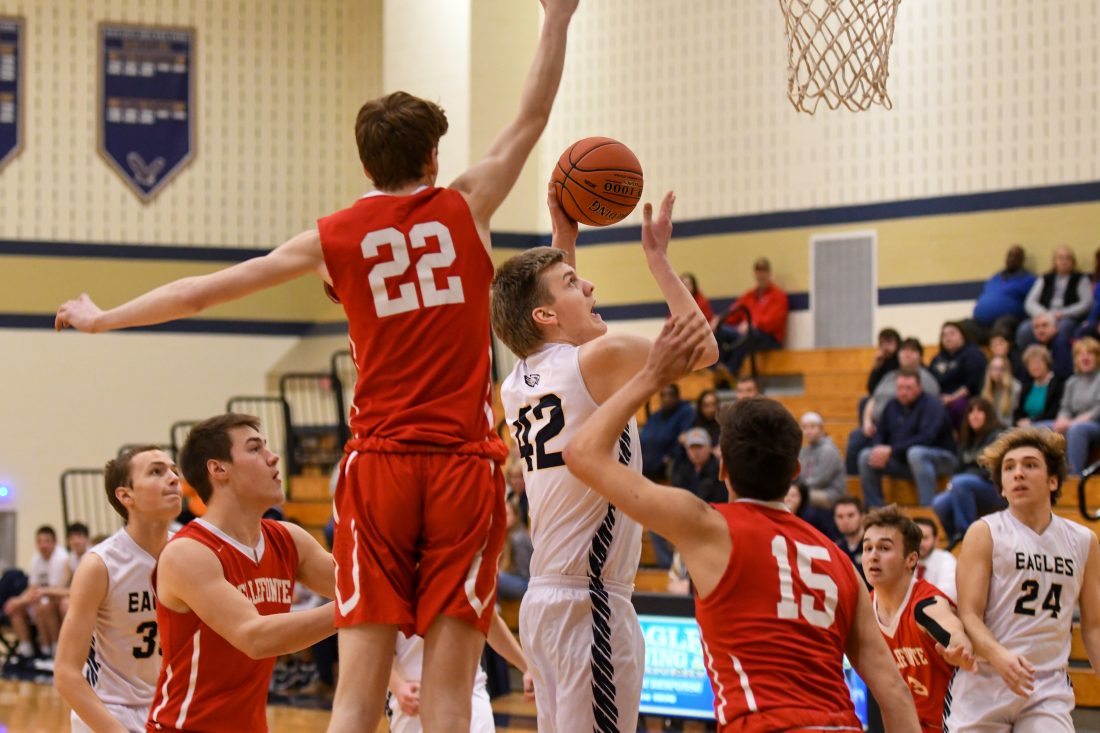 WINGATE -Friday night was another reason for loving rivalry games.

The Bald Eagle boys basketball team hosted Bellefonte Friday night and the two showed what a real-rivalry game should be.

It was a flat out heart stopping, nail biting and physical contest from the very beginning until the very end.

In the end, it would be Bald Eagle that would survive the Friday night prime time battle, 53-43.

“We went into that spell where they (Bellefonte) came back and got to three and I called a timeout. I told them we have to find a way to win this game,” said Bald Eagle Area Coach Bill Butterworth. “We stressed all week that this is the week we have to step up or our season with the playoffs are over if we don’t start winning.”

Both teams’ defense showed up in the first half, making a strong statement as the two combined to hold the other in the teens as the second half got underway.

The Eagles, led by the leadership of floor general Jaden Jones, went right to work in the period as he was fouled while in the process of shooting a 3-pointer. He was automatic on all three foul shots, upping the Eagle lead to 22-16.

After a turnover by Bellefonte, Jones took the ball to the heart of the Red Raider defense, increasing the lead to eight with 6:51.

Isaiah Nadolsky cut it back to six as he went into traffic to hit a shot.

From there, Jones was almost unstoppable as he finished the third with a 13-point effort, extending the Bald Eagle lead to 36-23 going into the final stanza.

After fending off a late comeback attempt, Bald Eagle Center Nick Maynard was fouled early and often but was unphased at the line, hitting 8-of-9 from the free throw line for his team.

Trailing 36-23 going into the final stanza, the Red Raiders mounted a comeback attempt.

“It was a disappointing start for us. I thought mentally we weren’t as focused as we needed to be,” said Bellefonte coach Kris Glunt. “We let some adversity get the better of us. I don’t think we made good decisions with the ball at times. Ultimately, we put ourselves in a big hole. I thought we fought back. I was proud of our effort towards the end but ultimately it wasn’t enough.”

After a bucket by Bald Eagle, Bellefonte mustered a scoring run of 6-2 with buckets by Nadolsky, Ben McCartney and Mason Grey, making it a 38-29 contest.

Maynard went to the line and hit his first two foul shots of the quarter.

McCartney tallied his team back, posting consecutive baskets, cutting it to a 7-point deficit with 4:07 left. All four points were from the charity stripe.

The Red Raiders forced a turnover and got the ball in transition to Nadolsky, making it a slim 40-35 ball game.

Bellefonte forced yet another turnover, and got the ball to McCartney once again, closing it down to a 40-37 contest.

Both teams would exchange buckets and the 3-point Bald Eagle lead would stay until the 1:10 mark when Jones added two more foul shots to go ahead by four points, 47-43.

From there, the Bald Eagle defense forced numerous turnovers, making the Red Raiders forced to foul and send Nathan Hoover and Maynard to finish the scoring from the foul line, ending the contest at a 10-point Eagle victory while adding another page to the long and distinguished rivalry game.

Jones posted a 24-point effort on the night while fellow Eagle Maynard finished with a double-double with 15 points and 11 boards. He also blocked three shots.

Bellefonte got 14-point performances by McCartney and Nadolsky in the loss.