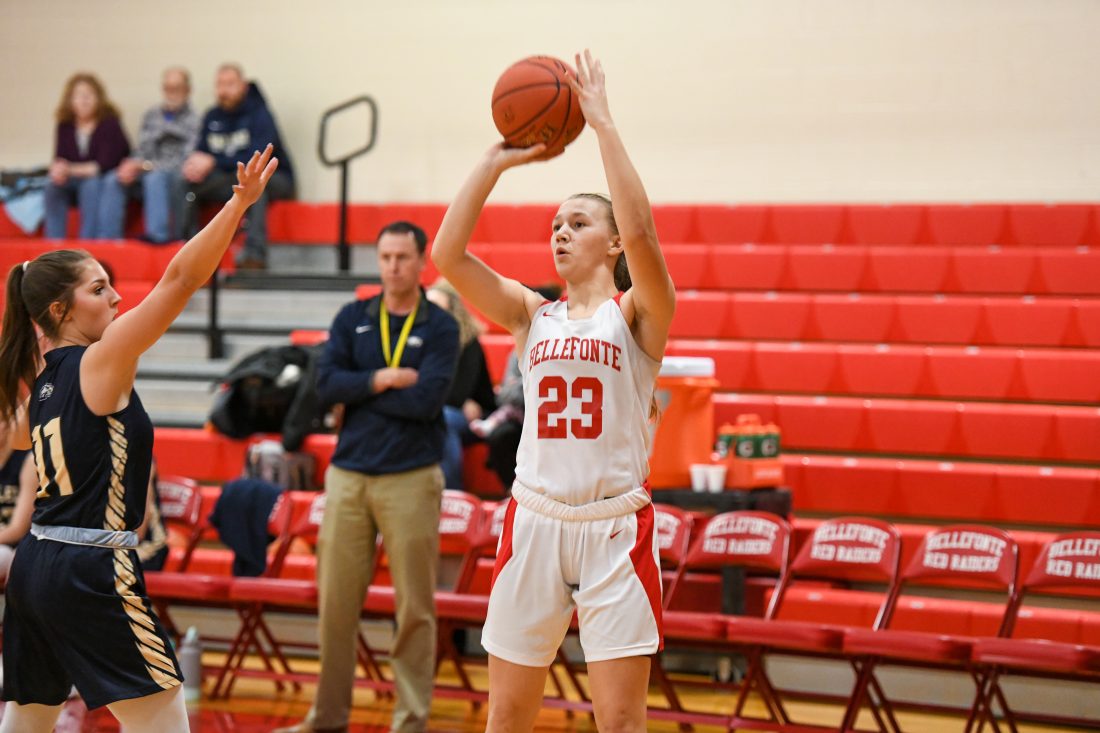 And defense was the name of the game.

In a slugfest that featured a whole lot of defense, the Raiders came out on the winning end of things, 34-25.

“I think we were just very committed to playing defense, especially in the second half,” said Bellefonte first-year head coach Marcus Toomer. “They really ratcheted up the defense. We’re a defensive team. If we play great defense, we’re gonna give ourselves a chance to win. They did that tonight.”

In the low-scoring affair, no player on either side of the ledger reached double figures.

The defensive battle was exactly what Bald Eagle Area head coach Darin Hazel expected. He’s proud of the way his squad has played defensively, he said.

“We’ve been really good defensively. Out of the 52 teams in District 6 – in all classifications – we’ve given up the fewest points in the district. We’re No. 1 out of 52,” Hazel noted. “I’m feeling really good about our defense. Our offense is a work in progress. We’re very banged up right now.”

BEA (4-5 overall) has just eight players on its varsity roster.

On Friday night, both teams were sluggish out of the gate. The Raiders (4-9 overall) got on the board first with a Maddie Tice free throw. Mallorie Smith followed with a bucket and Tice drained a three-pointer to give Bellefonte and early 6-0 lead, forcing Hazel to burn a timeout with 3:51 left in the opening stanza.

That seemed to spark the Eagles, who finally got on the board with a free throw from Kierra Serb and a two-footer from Abigail Hoover. The first quarter ended with the Raiders holding a 6-3 edge.

In the second quarter, BEA continued to chip away at Bellefonte’s lead. The Eagles got it to 8-7 at one point, but that would be as close as they would get on this night.

Lily Gardner got a nice bucket off a steal and the Raiders’ lead swelled to 14-9 late in the first half. Bellefonte carried a 15-11 edge into the intermission.

In the second half, Bellefonte began to pull away. Back-to-back field goals by Mia Johnson pushed the Raiders’ lead to 24-15 late in the third quarter.

Bellefonte really spread the scoring around. Tice and Gardner led the way with seven points apiece, while Smith (6), Johnson (6), Bella Corman (4) and Taylor Kerr (4) all chipped in.

“We really want to put the girls in position to be successful. Find your shot, be in your range and take those shots if you have it. They were really able to do that and they’re playing with a lot of confidence,” Toomer said.

“You gotta give (Bellefonte) credit. They made shots when they needed to make shots and they played good defense. They battled and it created some issues in the second half,” Hazel said.

By Cory Giger cgiger@altoonamirror.com Penn State football coaches have had to learn how to become online ...