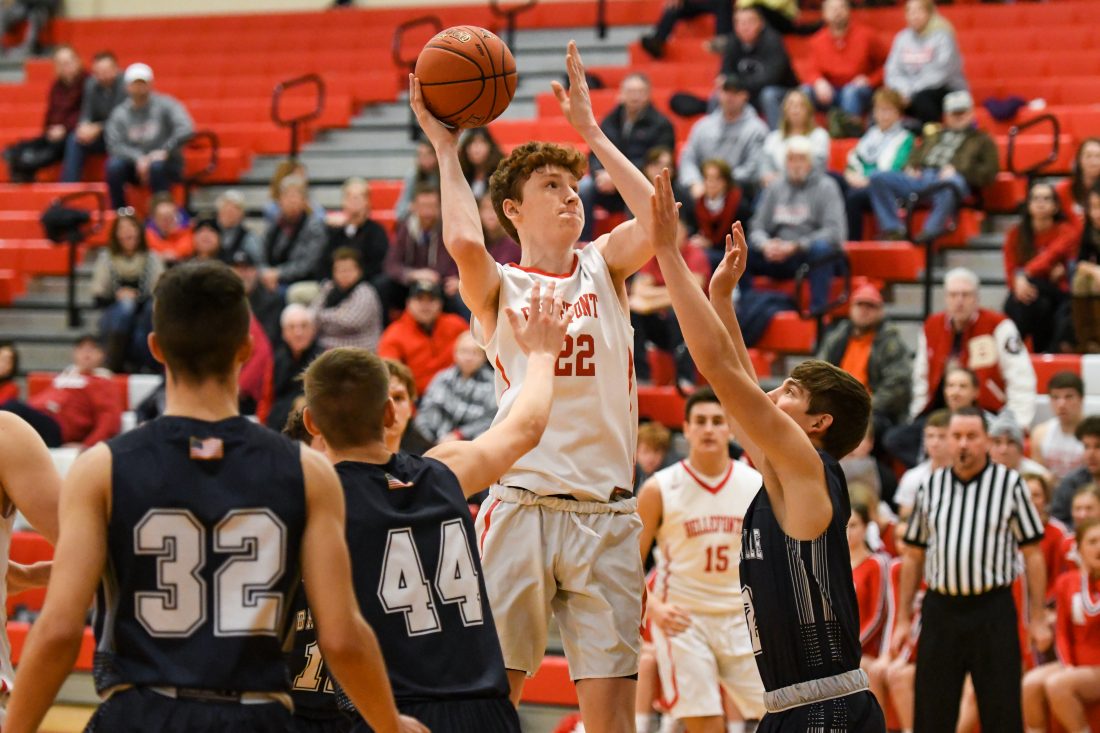 BELLEFONTE – This was one was not for the faint of heart.

The Bellefonte basketball team rallied back from an early third quarter 10-point deficit to force an overtime period against Brookville.

In overtime, sharpshooters Ben McCartney and Mason Grey hit key triples as the Red Raiders completed the job, taking a hard-fought 52-48 victory over the Blue Raiders.

“This was an outstanding win. The grit in the overtime period when we lost some key guys was really great to see,” said Bellefonte coach Kris Glunt. “I thought we made some good decisions. Ben McCartney wasn’t [himself] early on but then he lifted us up then at the end of the game. I thought our post players played a heck of a game in the first half. So this really was a total-team effort.”

After forcing an overtime period, the Red Raiders had new life and took that momentum in the extra period.

Bryce Baughman got the scoring started, hitting the first bucket of the period.

On the first Red Raiders possession Grey was cool under pressure, as he stood behind the 3-point line and his nothing but net to put Bellefonte up by one, 42-41.

Like it did for much of the contest, Brookville countered and even extended its lead by posting a 5-0 run to go up 46-42 with 1:55 remaining.

However, Bellefonte countered quickly, cutting the Blue Raiders lead to one with a triple by McCartney.

After two misses at the free throw line by Brookville, the Red Raiders took back the lead when McCartney went right into the lane and popped a bucket in traffic, giving them a 47-46 advantage with 1:20 left.

The Blue Raiders were determined to take back that and did so when Aaron Park went right at the heart of the Bellefonte defense and was fouled. Logan Bernier, who finished with a double-double, fouled out on the play with 53 ticks left in the game.Park made both shots, taking back the lead at 48-47.

Back battled the Red Raiders as the ball got back to McCartney and he stood way behind the 3-point line and got a roar from the crowd as it went in without touching nothing but the bottom of the net, putting them back ahead at 50-48 with only 37 seconds left in the game.

On Brookville’s next possession, McCartney brought down a crucial rebound after a Blue Raider miss.

Coach Glunt quickly called timeout to set the plans for the next 22 second of the game.

Coming out of the timeout, McCartney was fouled and went to the line, hitting one-of-two extending the lead to three with 17.1.

Brookville was forced to call a timeout and then with 4.4 seconds left, Grey stepped up and stole the ball to secure the win as he was fouled and made one foul shot of two, clinching the 4-point victory.

McCartney finished with a 15-point and 6-rebound effort while Bernier tallied 13 points, four blocks and 10 rebounds.

Isaiah Nadolsky rounded out the double-digit scorers with an 11-point and 6-rebound tally.

Coming into the fourth, Bellefonte trailed by three at 29-26.

They cut it to one on its first possession when Nadolsky pulled a head fake and drove to the basket in traffic.

Bernier picked up a crowd cheering block as the momentum started to turn in the Red Raiders’ end.

On Bellefonte’s next possession, Bernier came up clutch on a sweet soft shot in the lane after pulling down an offensive rebound, putting his team ahead for the first time in the second half.

McCartney put the Red Raiders up by three, hitting a perfect 2-for-2 from the charity stripe.

Both teams would head down to the final moments of the final regular stanza taking turns at the lead.

Trailing 39-37 with less than a minute, Bernier sent the game into the overtime period with another strong leaner in the lane.

The Red Raiders will be back in action Friday as they travel to Bald Eagle Area.