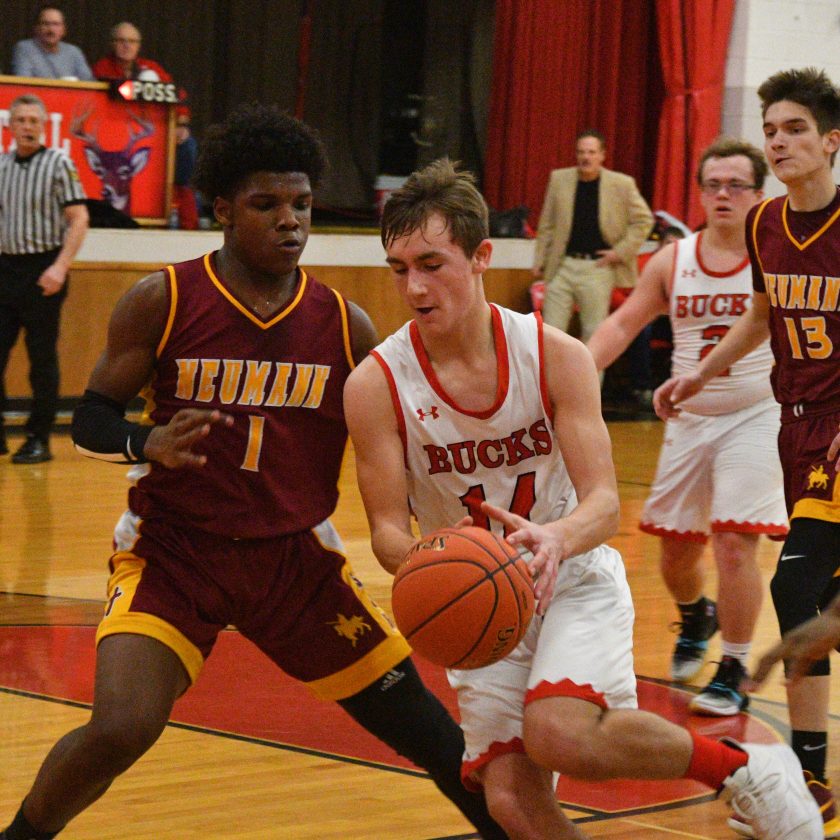 (KEVIN RAUCH/FOR THE EXPRESS) Bucktail’s Dylan Cross looks to get around St John Neumann’s Davion Hill in yesterday’s 71-42 loss against the Golden Knights.

FARWELL- It was a rare Sunday afternoon basketball matchup yesterday when the Midd Penn leading St. John Neumann Regional Academy visited Bucktail, as the Golden Knights were riding a seven-game winning streak having not lost since their season opener.

Gene Bruno’s Bucktail squad has a rather depleted lineup, and currently fields a five-man varsity team so an upset seemed unlikely as the Bucks lost 71-42.

Still, those five Bucks suiting up Sunday came out strong, getting their fans into the game early as they had plenty to cheer about.

Led by Gabe Conway’s eight first quarter points, Bucktail not only jumped out to an early 2-0 lead but answered the bell several times before the Golden Knights tried to pull away.

The Bucktail faithful applauded as their team managed to keep pace with Neumann, trailing just 11-10 with a time out called at the 2:22 mark in the first.

As the teams again traded baskets Neumann coach Joe Clark called a timeout with forty seconds remaining, out of obvious frustration, as the home team trailed just one point 13-12, again getting a rise out of the Bucktail faithful.

The timeout would do exactly as Clark has hoped, which was unfortunate for the Bucks.

Neumann began an all-out press defensively and finished the quarter up 20-12 and would actually score 10 unanswered points until Liam Dwyer hit a layup. The Bucks would score just five second quarter points as the visitors took in a 35-17 score at half as the route was on.

The Golden Knights would make it eight wins in a row rolling up a 71-42 win, but the five-man effort of his team was not lost by coach Bruno.

“It was exactly what we wanted to do,” Bruno said of the surprise start that caught Neumann off guard. “It was a stall-type, back-door offense and we executed it perfectly. We only have five kids on JV and five on varsity, so we’re doing what we can against a team like that.”

“We tried to stop the Hill brothers from penetrating early, but eventually their size and physicality as a team was just too much,” Bruno explained as he offered that Neumann scored 22 points from the paint in the first half and 26 more from inside in the second half.

“They really didn’t stop our offense, we missed shots, but we were finding open looks that we just couldn’t finish,” Bruno continued. “At the end of the day it was a learning experience. They learned to run this offense and I just told them if you can run this offense against that team you can run against anyone”.

“I’m happy to be 3-5, with just five kids and now travelling to Benton on Tuesday, it’s a long trip with such a small team. We’re learning every night,” the coach finished. Following the Benton matchup the Bucks will return home Friday to host Muncy.