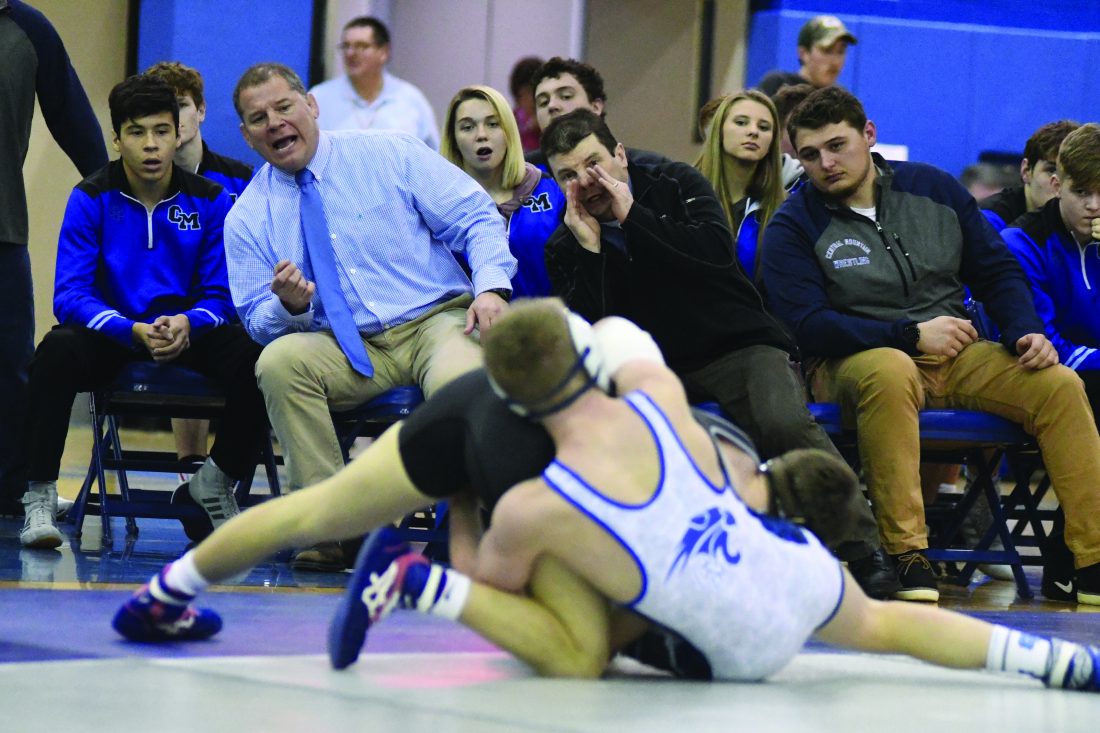 (MARK NANCE/FOR THE EXPRESS) Central Mountain's coach and wrestlers shout out to wrestler Braylen Corter, rear, during his match at 120 pounds at Central Mountain against Mifflin County on Thursday.

MILL HALL — Regardless of how you look at the dual meet when Mifflin County and Central Mountain lock horns in the regular season dual meet, you can be sure that somewhere both teams have the matchup circled on their calendar.

In many recent years, the battle has many times served as a barometer for dual meet supremacy in District VI, as well as an indicator as to what might happen later in the season in the District VI Duals, as well as in the postseason tournament.

Coming into the meet Thursday night, both teams sported unblemished records, the Huskies at 4-0 and the Wildcats with a 5-0 log.

After the smoke from the Ruckus on the Resilite cleared, the Huskies remained spotless at 5-0, while the Wildcats fell to 5-1 with a 37-18 Mifflin County victory. For the Huskies, it was the first-ever win over the Wildcats in a regular-season dual meet

Bonus points can be big in a dual meet and Walizer was quick to allude to that fact.

“They got off to the quick start with a couple of big bonus-point wins,” said Walizer. “I don’t think the final outcome tonight came out to bonus points, but when you get them it makes the score a lot bigger.”

Starting at 160, Trey Shoemaker got the Huskies on the board when he overcame a 5-point deficit to cradle Damien Galentine for the fall at 5:20 of the bout before defending state champ Trey Kibe made short work of Ashton Intallura for a fall in 55 seconds to give Mifflin County a quick 12-0 lead.

“Starting with that first match and coming up through things didn’t go well for us,” Walizer said. “But the bottom line is that we lost to a better team. There where some toss-up matches and not many of those went our way. To beat a good team such as Mifflin County you need to have everything pretty much go your way where you should win and get lucky in some other spots.”

Mifflin County’s Brycen Hassinger made a third-period reversal stand up for a 2-0 shutout of Caleb Porter at 182 before Nik Miller temporarily stopped the bleeding for Central Mountain with a 3-2 win over Jacob Krepps at 195.

“Caleb Porter has been out and that was his first six minutes of the season,” said Walizer. “He went against a guy who is ranked in the top 25 in the state at the weight above him and only lost 2-0.”

Hadyn Crum returned the favor for the Huskies at 220 when he made a second-period takedown and third-period escape stand up for a 3-2 win over Wildcat Gage Sutliff, before Mifflin County’s Blaine Davis turned the lineup over with a 1-0 decision over Cyrus McCall.

With the five wins in the first six bouts, the Huskies held a commanding 21-3 lead.

Facing the 18-point deficit, things didn’t get any better for the Wildcats when Nik Allison tossed a 6-0 shutout at Gino Serafini at 106.

Wildcat Derek Keen put his team back in the winners’ circle at 113 with a solid 5-2 win over Husky Hunter Johnson, but as they did earlier in the meet, the Huskies bounced back to the winners’ circle when Derek Burk used five takedowns for a 10-3 win over Braylen Corter.

Needing a win to stay in the meet, Central Mountain got just that when Taylor Weaver mauled Lucas Sheetz for a 10-2 lead before cradling the Husky to his back for the fall in 1:45, but again the Huskies bounced back with a fall in 1:06 by Kyler Everly at 132.

With the fall by Everly, the Mifflin County win was all but in the books at 33-12 with three bouts remaining on the card.

Putting some icing on the cake for the Huskies, Ethan Kauffman was all over Hayden Walizer for a 13-1 major decision at 138.

“Along with Caleb, Hayden has been out for a while so it is going to take some time for those guys to catch up as far as conditioning is concerned,” pointed out Walizer.

With the meet already in the books for the Huskies, Kaden Falls and Lane Porter closed out the meet with a pair of wins by decision for Central Mountain to set the final.