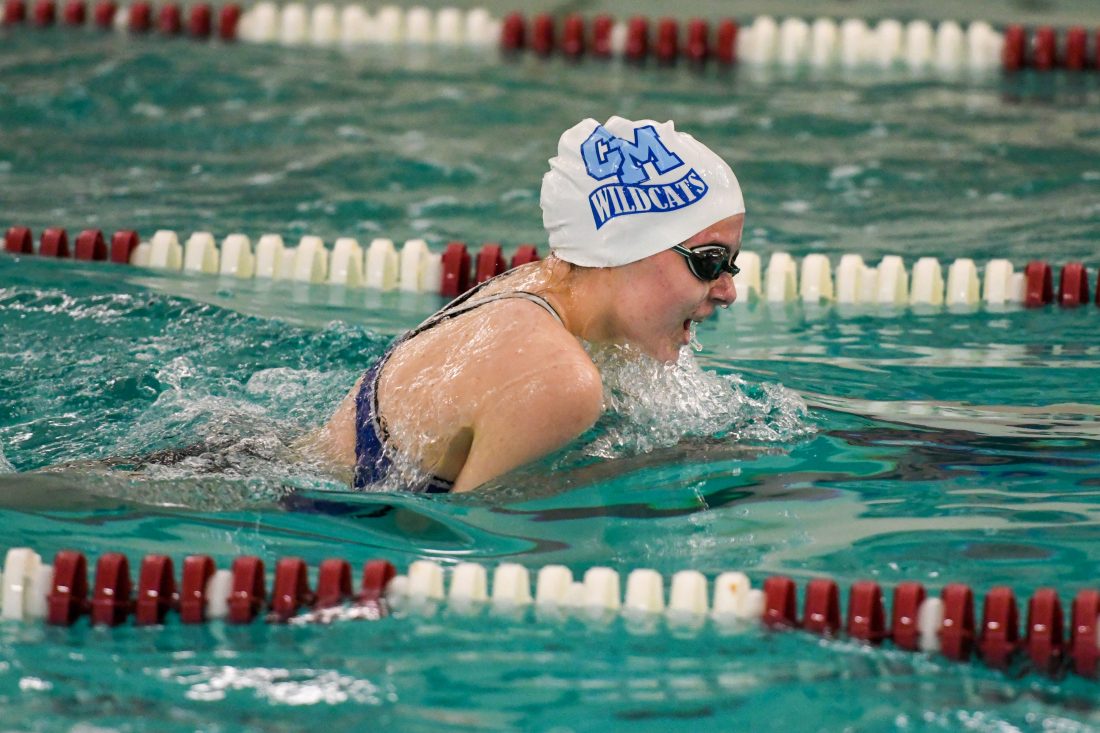 LOCK HAVEN – It was a Senior Night success for the Central Mountain girls swim team as they honored their four seniors with a hard-fought victory.

Being honored on the night were Le’Na LeTous, Derek Hughes, MiKayla Rich and Nate Laubscher.

A spirited come-from-behind effort by the girls 400-yard freestyle relay team proved the be the clincher as the Central Mountain girls swimming team outlasted Central Columbia, 85-74.

The Wildcat boys battled hard but came up short losing to the Blue Jays, 85-42.

“There were a lot of good swims tonight. The whole way up-and-down the line we had great swims from our seniors, our bottom swimmers. Everybody pitched in,” said Central Mountain coach Jim Merinar. “Two girls volunteered to swim events they never do. The last two relays they really put it together and won close ones.”

In the 400-freestyle relay, Madison Bair got her team out to a strong start matching Central Columbia’s Emma Morgan stroke for stroke, and as the second lap ended she had a small lead as she sent the race to Hannah Brian.

Brian lost a little momentum in her laps but still kept her team within striking distance as Evie Rembold launched into the pool.

Rembold was able to pull ahead of Blue Jay swimmer Emma Welsh thanks to a strong turn on her first lap. But the action remained as did the Wildcats lead as anchorswimmer Mikayla Rich hit the water.

Just slightly behind her jump was Columbia’s Sara McHenry.

The two had an all out stroke-for-stroke pace going into the last length.

That wasn’t the only close call for the Wildcats in relay competition.

Earlier in the competition, Central Mountain bested Central Columbia girls again by just microseconds, posting a winning time of 1:48.58 while the Blue Jays had a finishing time of 1:49.18.

Starting off the competition, Central Mountain won the 200-yard Medley Relay with a time of 2:04.65. The team consisted of Kylie Garman, McKenna Fox, Evie Rembold and Rockey.

In the girls 200-yard freestyle, Rich posted a second place while teammate Bair finished third with times of 2:07.81 and 2:14.94, respectively.

It was a one-two finish for Central Mountain in the 50-yard freestyle as Rembold took top honors with a time of 27.32 and Rockey finished with a 27.60.

McKenna Fox took the 100-yard backstroke with a time of 1:18.00, rounding out the top honors on the girls’ side.

On the boys’ side, the Wildcats weren’t able to post any first-place finishes but were able to pick up some second place nods.

Parker Orndorf placed second in the 200-yard freestyle with a final mark of 1:59.41.

Germello was next in the second place finishers posting a 31.86 in the 50-yard freestyle.

Hughes came through with a second place nod in the 100-yard butterfly, posting a time of 1:01.81.

The boys 200-yard freestyle relay took second as the combination of Laubscher, Germello, Hughes and Parker Orndorf finished with a time of 1:58.64.

The Wildcats ended its day the same way it started, with a second place in the relay division.

This time the team would finish with a mark of 4:30.11. Members were Germello, Laubscher, Orndorf and Gugino to round out the evening.