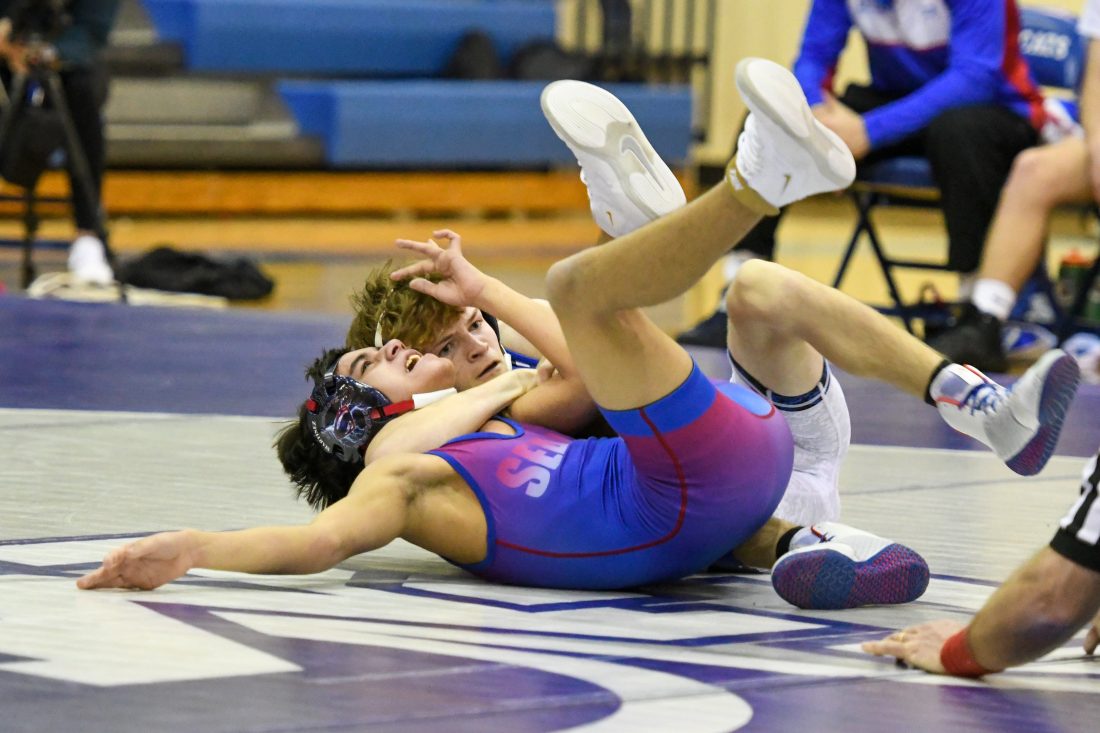 MILL HALL — And the parade of outstanding opponents continues!

The Central Mountain wrestling team has had few, if any, cupcake opponents thus far in the 2019-20 season. Tuesday night was no different as the Wildcats entertained yet another unbeaten opponent in Selinsgrove (9-0) in a Heartland Conference dual meet.

Facing the task of defending their home turf, the Wildcats battled and scrapped to take care of business as they handed the Seals their first loss of the season with a 36-30 win in the PHAC showdown.

Trailing by 10 points (20-30) with three bouts left on the card, the Wildcats got a pair of falls and a major decision in the final three bouts to put a 36-30 win in the books while handing the Seals their first loss of the season.

Holding the lead at 32-30, freshman Gino Serafini was solid with a meet-clinching 8-0 major decision win over Donovan Goundie and the emotional win on senior night was history.

“Starting with Cyrus McCall and then the two lightweights (Clayton Foster and Gino Serafini), they really did the job,” said Walizer. “Foster didn’t make the lineup that often but he certainly made the most of his opportunity tonight. It was really nice to see those guys come up big at the end when they had all the pressure on them, going into the last three bouts down by 10 points.”

Braylen Corter got things going at a fast pace for the Wildcats at 120 when he was all over Thomas Strouse for an 18-1 technical fall in 5:49, but Aiden Gaugler of the Seals came from behind to reverse and pin Derek Keen at the 5:41 point of the bout at 126 in a wild one.

Taylor Weaver returned the ‘Cats to the winner’s circle at 132 when he cranked Sylvan Martin for the fall with six seconds left in the opening period.

Garrett Paradis picked up a big win for the Seals when he scored with a takedown in the final seconds for a 9-7 win over Hayden Walizer at 138 and Teague Hoover made it two wins in a row for the Seals at 145 when he rode a four-point first period to a 7-2 win over Kaden Falls .

Damien Galentine gave the Wildcats the lead for the third time at 14-12 when he scored three points in the final seconds for an 8-5 win over Josiah Foss at 152 and Lane Porter tacked on three more team points for CM at 160 when he sealed a 6-2 win over Dean Hollenbach with a late takedown.

State-qualifier Coy Bastian swung the pendulum back in favor of the Seals at 170 when he slicked and decked Ashton Intallura in the first period and Steve Miller made it two falls in a row for Selinsgrove when he pinned Caleb Porter at 3:38 of their bout at 182.

With the Miller fall, the Seals held a 24-17 lead with five bouts left on the card.

Nik Miller temporarily stopped the CM bleeding at 195 when he defeated Ryan Aument by a 5-2 score before defending PIAA champion Nate Schon gave the Seals a double-digit lead (30-20) with a fall in 2:50 over Gage Sutliff with three bouts left.

Not about to give up, the Wildcats came through with their three big wins to close out the dual and send the fans to the exits.

Prior to the meet, the Wildcats honored the three seniors on the squad and although none of the three were in the lineup, Walizer was quick to point out that the three contributed a lot to the program during the past four years.

“Those three seniors get another year up on the Heartland banner for three consecutive championships while they were on the team,” said Walizer. “When they introduced them, Curtis Stover and Noah had won junior varsity tournaments so they are pushing the other guys in the room and that is what is important to make the team better.”