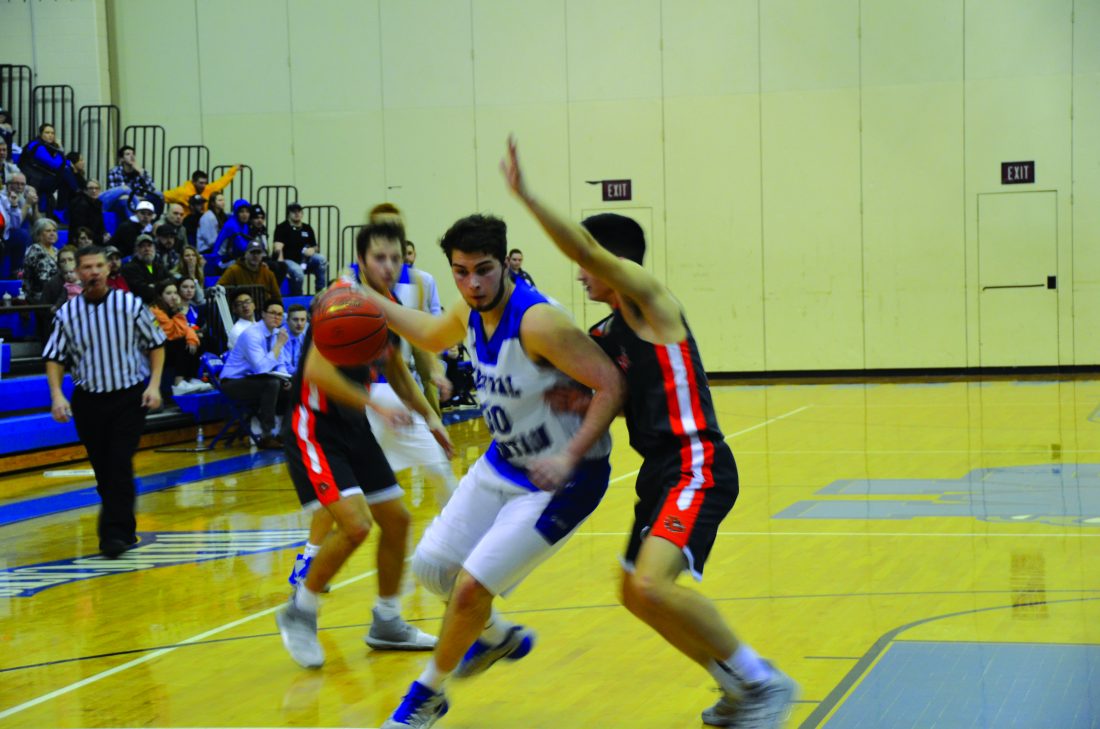 The area scoring leader erupted for 33 points as he led his team to a road win to remain in the driver’s seat in the Heartland-I conference.

“He’s pretty darn good. He’s got some areas he can work on and that’s one of them. He did a good job tonight setting guys up with his play but he also knew when to take it himself and attack. He’s just expanded his game so much in the last year. He’s not only a good shooter, he’s a good driver, he’s good in transition, he can do a little bit of everything, and sometimes a lot of everything,” Jersey Shore head coach Scott Munro said of Ewing.

The Central Mountain gymnasium was packed full, and the energy was evident at tip-off on how much this game meant to both teams. Jersey Shore and Central Mountain exchanged three pointers early in the first quarter, sending the fans into an eruption and setting the stage for the battle.

“It’s something we always talk about coming up here because it’s a rivalry. The kids go back and forth on social media, the fans, all that stuff. We just wanted to come up and focus on what we do. What we talk about in pregame and what we talk about in the huddle and that’s it,” Munro said of his team’s win.

The first half was a tale of effort and grit. Central Mountain’s Conner Soo made hustle-play after hustle-play, extending possessions for the Wildcats. Nate Ewing was as exciting as he is, scoring 19 of his 33 by halftime. Ujjval Adroja led the charge on the hardwood for the Wildcats playing gritty fearless basketball. Adroja was in every defender’s face he could be. He drew multiple charges in the half, and even when he got beat to the rim he came back more aggressive en route to his team high 17-point night.

“He’s a system-IQ guy. He knows exactly what we wanna do, he knows gameplans like the back of his hand. He’s a consummate leader, he’s doing all the little things. When he starts to do that, other guys see it. That’s a special guy, when you can make others around you feed off you and get better. Can’t even put it into words. He’s huge,” Central Mountain head coach Tyler Bardo said of his team leader Friday night.

At halftime the Wildcats only trailed 33-27 and came out aggressive on defense. With four minutes to go in the third quarter Central Mountain had pulled themselves to a 34-34 tie holding Jersey Shore to one-point through half of the quarter.

The passing ability and quickness of the Bulldogs proved to be too much as they quickly woke up and stole the momentum right back, ending the quarter on a 15-5 run. The fourth quarter would be much of the same after back-to-back Ewing threes put a dagger into the Wildcats’ chances en route to a 15-point win.

“We felt like we rebounded the ball and at times we weren’t aggressive enough. It’s about filling lanes and making the correct-advanced passes. If we’re not making the correct pass things are totally different, your ability to get to the rim. Credit jersey shore, obviously they take things away,” Bardo continued.

The Wildcats fall to 2-6 on the season and enter a stretch with four of their next six games being on the road.

Jersey Shore moves to 6-2 and remains in first place of the conference.

“I wanna see us take care of the basketball a little better. We gave it away a little too much at crucial times. I wanna see us concentrate on the little things on the defensive end. Boxing out, not leaving shooters. I thought for the most part we did a really solid job but there were times we gave up some things we shouldn’t have given up. If we can focus on those little things on the defensive end we have a really good chance to be really good,” Munro said of his teams chances heading down the stretch.

One book, One Bellefonte: Annual event a big success once again