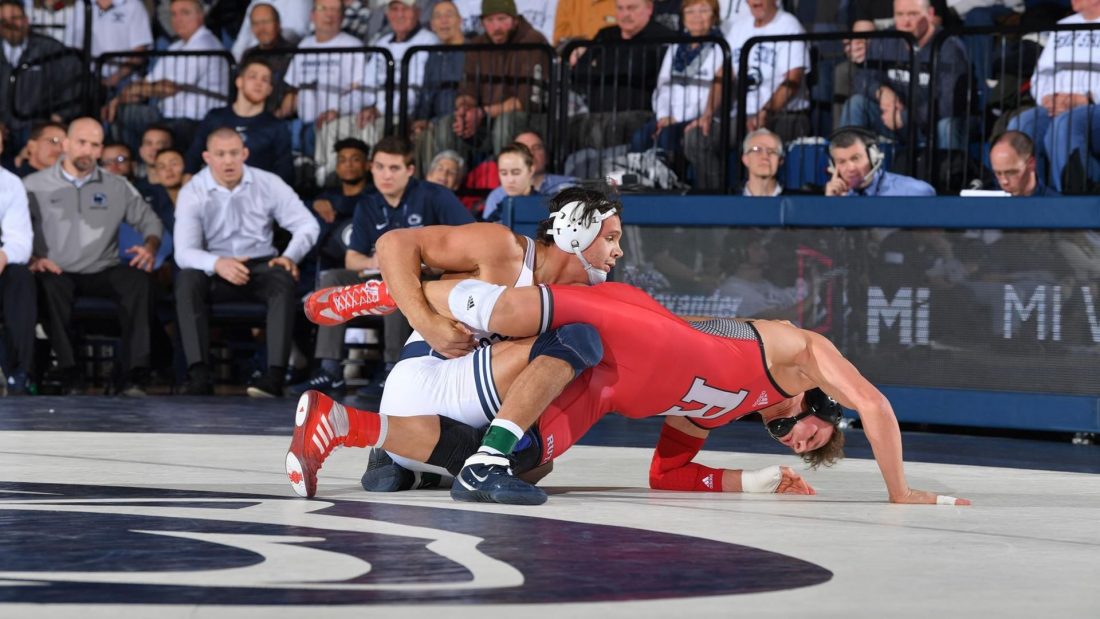 UNIVERSITY PARK — The Penn State wrestling team picked Sunday to wrestle its most complete match of the season, in front of another Rec Hall sellout crowd and an ESPN national television audience.

No. 22 Rutgers, which sent out a lineup that features five freshmen, could present very little resistance.

The No. 2 Nittany Lions (6-1, 3-0 Big Ten) pounded the Scarlet Knights (7-3, 2-2), 38-6, winning eight of 10 bouts. Penn State posted three falls, an injury default win, a technical fall and three decisions and amassed a 23-3 edge in takedowns, preventing nine of the 10 Scarlet Knight wrestlers from scoring in the neutral position.

“We keep preaching, ‘just keep getting better.’ There’s five freshmen in that lineup,” Rutgers coach Scott Goodale said. “You’ve got to be able to match the fight in this type of atmosphere. Like at 184. It was a great match, then it got a little bit more physical and he bailed out on it. We can’t bail out on it.”

For Penn State, this was arguably its sharpest performance to date, which is to be expected by coach Cael Sanderson’s way of thinking.

“I think the guys wrestled pretty good. I think we gotta just keep getting better as the season goes on. I think that’s what’s happening,” he said. “Yeah, I think overall the guys wrestled, I’d say, a little sharper than they did a week ago.”

Penn State broke out its white singlets, in keeping with the White Out theme that most of the sellout crowd of 6,485 embraced.

Rutgers seemed equal to the challenge through the first five weights, winning two of the five and it trailed just 11-6. However, after the break, Penn State won five straight matches, notching bonus points in four of them and a shutout in the other.

Goodale admitted that his team just couldn’t measure up.

“Their horses showed up on the mat, and there’s a big talent gap there. They’ve got a lot of horses from 165 up and we’re not able to match them right now,” he said.

Top-ranked Vincenzo Joseph set the tone for the Nittany Lions’ finishing sweep. He rolled up a 15-3 lead before locking up a near cradle and scoring a fall in 6:14.

Aaron Brooks added another pin for Penn State at 184. Leading 5-0, he scored a takedown and immediately locked up a near cradle and scored a fall in 4:35.

Brooks said he feels like he’s improved a lot since being pulled from redshirt and being inserted into the lineup on Dec. 6.

“A lot, I think, mentally and physically. I’m just going out there and wrestling free. I think was the biggest thing that I’ve really improved on and just having fun,” he said.

“A lot of times I used to wrestle really stiff. I would start really fast and everything but I just wouldn’t focus on the flow of things so I think now just going out there and just doing what I do, kind of like it’s play wrestling or practice mode, but obviously going hard, but just chillin’ really.”

At 197, No. 20 Shakur Rasheed continues to show improvement in each match. He faced a former roommate in No. 18 Jordan Pagano and dominated in a 6-0 shutout.

“I’m just feeling better and better every day. That’s part of their (the coaches) process, so I’m just moving on to the next match, which is Nebraska. You know, obviously there are things I can improve on but I’m just learning as I go and just trying to get ready for March,” he said.

Seth Nevills ended the match with yet another fall for Penn State, ending the bout at the 2:23 mark.

Roman Bravo-Young, ranked No. 3 at 133 pounds, remained undefeated, but he was pushed into a second sudden victory period. No. 9 Sammy Alvarez traded escapes with Bravo-Young in regulation and in the first two tiebreaker periods. As the final seconds ticked away in the second sudden victory period, Bravo-Young snapped Alvarez down, spun around behind and grabbed both of the Knight’s ankles for a takedown and a 4-2 win.

Second-ranked Nick Lee followed Bravo-Young’s nailbiter with a no-doubter. He used six takedowns and a punishing ride on top to accumulate 4:37 in riding time in a 19-4 technical fall in 7:00. Lee, too, remains undefeated on the season.

At 149, Jarod Verkleeren used two first-period takedowns, an escape in the second and another takedown in the third for a workmanlike 7-3 decision.

Penn State’s presumptive 157-pound starter Brady Berge sat out yet another match as he deals with the after effects of a head injury he suffered in a U23 World Championship match in October. He wrestled and won against Lehigh on Dec. 6 but hasn’t been in the lineup since.

With the exception of Berge, this could be the lineup Penn State will field the rest of the season. Sanderson said it has a lot of potential, as it showed Sunday.

“This is a fun team and we’ve got the potential to score a lot of points,” he said, “but you know we have to go do that.”