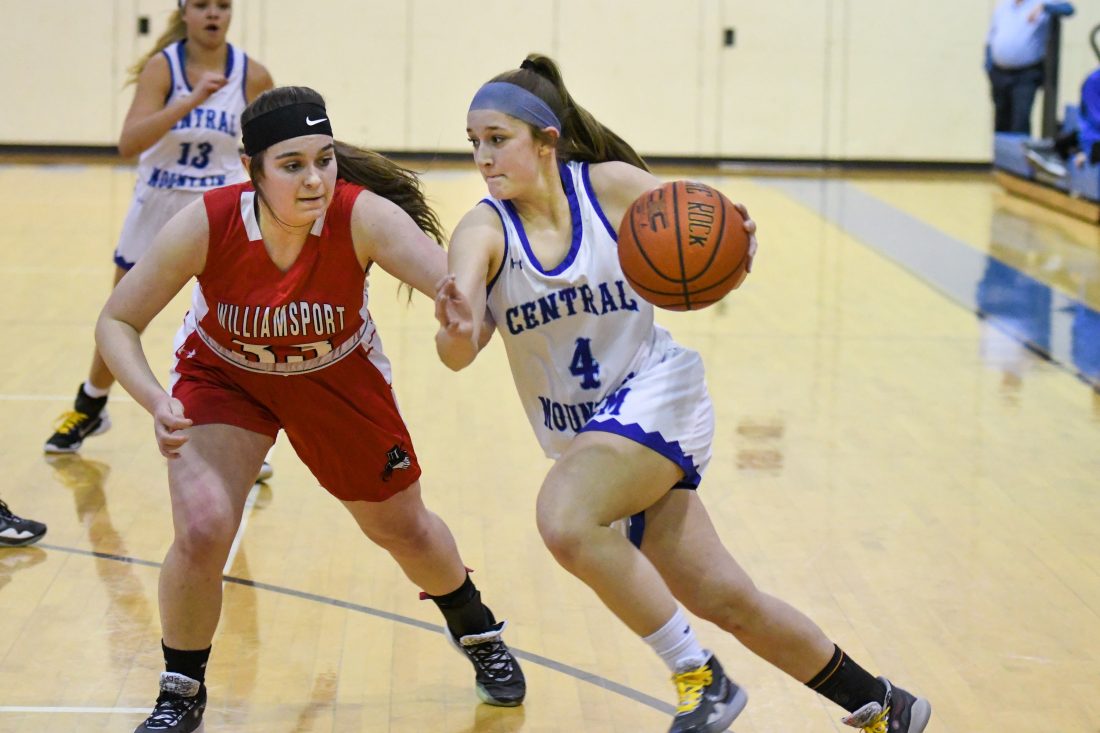 MILL HALL — With wrestling having the week off, the Central Mountain boys’ and girls’ basketball teams dominated this week’s headlines. It was an up-and-down week for both squads, but each team secured a significant win in climactic finish. Let’s start this week’s column with boys basketball.

The Central Mountain boys’ basketball team finished off the week 1-2. They commenced the schedule Monday with a 78-42 loss against the top-dog Tyrone Golden Eagles (18-2). The defense surrendered another 78 points Wednesday in a 78-56 loss against rival Jersey Shore.

Then Saturday — seemingly revitalized by the game’s importance (it was Senior Night), the Wildcats turned in a complete four-quarter effort to send off its seniors with a win in their final home game, 51-49, against the Mifflin County Huskies.

Evan Baker, Ujjval Adroja, Conner Soo and Zane Probst comprised the team’s seniors and all four had starring roles on Saturday night. Probst led the bunch with nine points, Soo had another six and Baker had two.

“We were really aggressive throughout and I was very pleased with our defense,” coach Tyler Bardo said of Saturday’s win. “Offensively, we were pressing a bit given the magnitude of the night. All players wanted this game badly for our seniors. As I always tell my guys, ‘you can deserve a lot of things but you have to earn everything.’ They earned that one on Saturday.”

Like the boys’ squad, the girls’ team suffered a pair of defeats this week, to Williamsport and Central Columbia. But preceding the two losses was a sensational 42-27 win against rival Jersey Shore. The Wildcats undoubtedly played their best basketball in years during the second half after they rattled off an 18-point run after falling behind 20-17. The Wildcats dominated on both sides of the ball — with Kiahna Jones’ game-high eight rebounds and five blocks anchoring the defense. Alyssa Fisher boosted the offense with a game-high three three-pointers in an 11-point effort.

“On Tuesday at Jersey Shore we got down early in the first quarter,” coach Scott Baker said. “However, we regrouped nicely and played three solid quarters to earn a big-rivalry win. In that contest we played perhaps our most disciplined offensive basketball of the season. However, the ultimate key to that win was our defense in particular, rebounding. We were dominant in that regard.”

The team concluded the week with a 50-38 Senior Night loss to Williamsport, and a 63-32 defeat to Central Columbia on Saturday. Jones’ defense shined again Saturday versus the Bluejays as she totaled 15 rebounds and four blocks.

“On Thursday we hosted a big and pretty athletic Williamsport team and once again fell behind early and again regrouped nicely to close to within four points with about four minutes to go in the game, but were unable to get any closer,” Baker said of the Williamsport loss. ” Finally, on Saturday we played on the road against a very good Central Columbia team. We played alternating good and bad quarters in that game to suffer a disappointing loss.

“Despite our 1-2 record for the week we did see some progress particularly from an individual standpoint. We are continuing to see growth from some young ladies in areas that we have been working hard on. We are confident that the future, for a number of those young ladies, as well as the CM program as a whole, is very bright. We close out the season Monday hosting a very good Bloomsburg team and then will take some time to reflect, refresh and regroup in preparation for a huge off season that will be critical to the future success of the program.”

Members of the swimming team competed in Saturday’s Coaches Invitational hosted by Williamsport High School. Derek Hughes took first in the 100-backstroke with a time of 59.39.

This is a hard selection given the fluctuating week Central Mountain had, but I give the slight edge to the Central Mountain girls basketball team for their brilliant second-half performance. The team played near-perfect basketball during their 18-0 run against a quality Bulldogs team that’s troubled them in the past. With all five starters returning next season, 2021 could potentially see CM end the year with a winning record.

ATHLETE OF THE WEEK

Kiahna Jones gets the nod this time. The freshman has already proven to be a solid starter and her defense is one of her strongest assets, as evident by her 15 rebounds and four blocks against Central Columbia on Saturday. Jones leads the Wildcats with 6.5 rebounds per game this season, and her 2.6 blocks per game average is two blocks higher than the next player, Quinlynn McCann.

Laurel Moyer had another productive outing for the LHU track and field team on Saturday. She won the mile-run and 3,000 meter competition at the Utica College Blue & Orange Invitational.

Collin Jones scored 17 points for the Lebanon Valley College basketball team versus Lycoming on Wednesday. He added another 14 against Albright later in the week. Jones, whose younger sister Kiahna won this column’s Athlete of the Week award, has averaged at least 10 points in six straight games now.

Central Mountain wraps up its regular seasons this week.

Wrestling travels to Hollidaysburg on Wednesday.