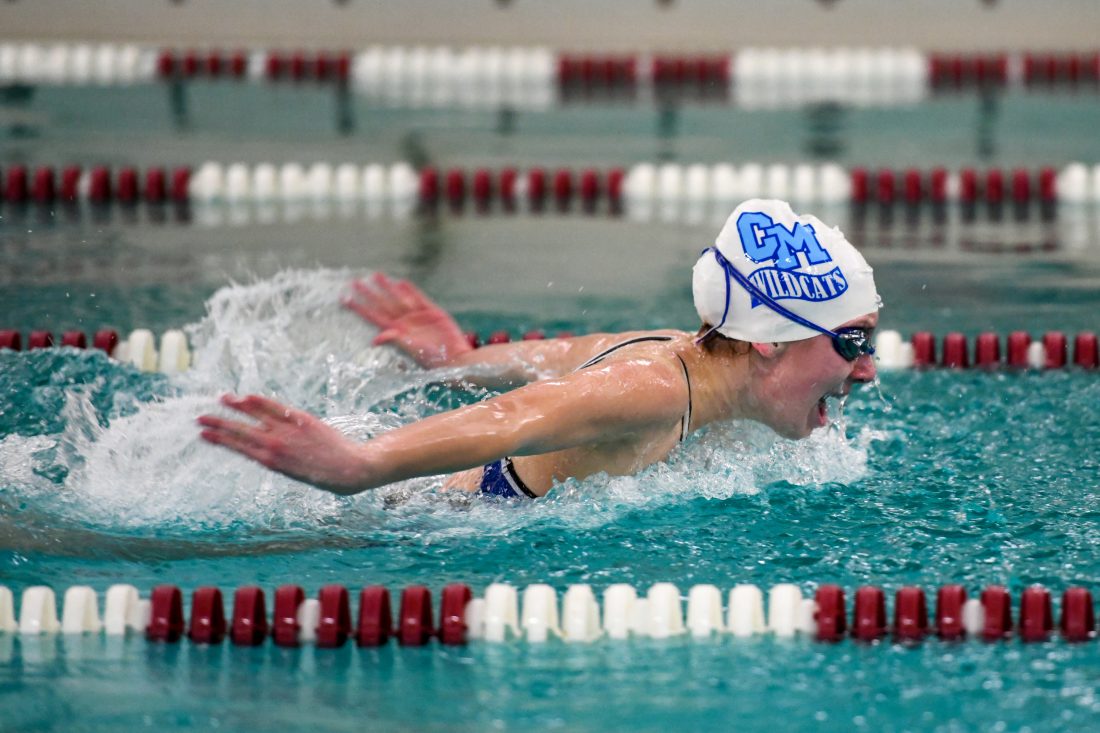 In the girl’s division, the Wildcats topped the Mount Carmel Tornadoes 100-36 while the boys also finished strong, coming out the victors in a 66-35 contest Tuesday at Lock Haven University.

“I’m very proud. They work so hard and the team-moral and the camaraderie has been great. They help each other. They push each other,” said Central Mountain coach Jim Merinar. “They’ve been a great team to work with and to have a win for our seniors to send them off is a really nice thing.”

On the girl’s side, Central Mountain picked up a first and third finish in the 200-yard medley relay. The team consisting of Autumn Garman, McKenna Fox, Madison Bair and Morgan Brian finished with a top time of 2:11.31.

Evie Rembold led the Wildcats to a win over teammate Kylie Garman in the 200-yard freestyle with times of 2:14.19 and 2:27.68, respectively.

Madison Bair finished with a second place finish in the 50-yard freestyle with a time of 27.32 just missing a first place by .22.

McKenna Fox finished third in the event with a time of 29.61.

Things continued to roll for the Central Mountain’s girls as Mikayla Rich finished with a first place time of 1:06.73.

In the girls 200-yard freestyle relay, Central Mountain again finished on top. The group consisting of Rich, McKenna Fox, Hannah Brian and Rembold topped off with a time of 1:54.04.

Kylie Garman continued the Wildcats’ winning ways as she got the first-place nod in the 100-yard backstroke with a time of 1:15.06.

In their final event of the night, the Wildcats got a win in the 400-yard freestyle. The team consisted of Madison Bair, Hannah Brian, Rembold and Rich with a top time of 4:14.96.

The boys got off on a positive note as well as the 200-Medley team consisting of Parker Orndorf, Leisher Gugino, Derek Hughes and Damon Germello finished with a time of 1:58.27.

In a rare second-place finish, the Wildcats’ Nathan Laubscher battled but had to settle for a second place nod with a time of 29.80.

Teammate Germello finished in third with a time of 31.40.

In the 100-Butterfly, Hughes added another first place finish as he posted a top time of 1:01.41.

In the grueling 500- Freestyle, Orndorf captured another first place with a time of 5:36.89.

The Wildcats also took the 200- relay with a top finish of 1:47.36. The team consisted of Laubscher, Hughes, Gugino and Orndorf.

Hughes again finished at the top spot, this time he placed first in the 100-backstroke notching put a time of 1:02.31.

With the win, Central Mountain’s regular season ended but it will now prepare for the District 6 swim meet at Penn State, Feb. 28-29.

At press time, the Wildcats will be taking 13 swimmers to the meet.